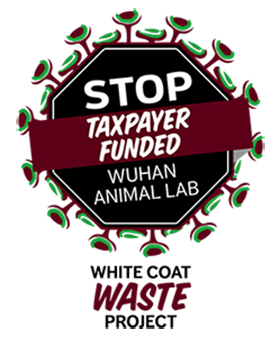 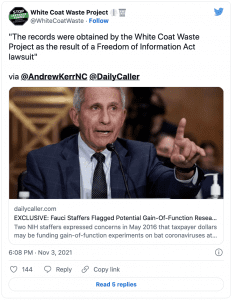 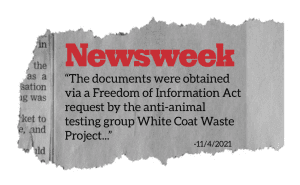 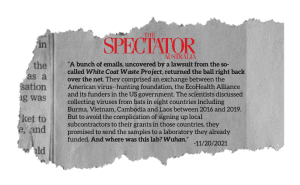 Here’s the FOIA challenge lawsuit we filed to get NIH’s explosive emails.

NIAID employees Jenny Greer and Erik Stemmy told EHA in a May 28, 2016, letter that their proposed grant “may include” gain-of-function research: 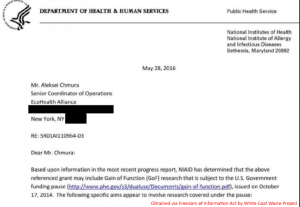 Then, bizarrely, NIAID asked EcoHealth to provide its own “determination” whether its planned experiments constituted GoF research. EHA said that they did not…and NIAID took their word for it! 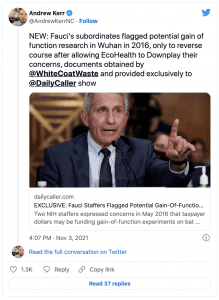 In a statement to the Daily Caller, Rutgers University Professor Richard Ebright explained it this way: “The NIH, in effect, delegated to EcoHealth Alliance the authority to determine whether its research was, or was not gain of function research subject to the funding pause, the authority to set criteria for the determination, and the authority to over-ride federal policies implemented by the White House in 2014-2017 and by HHS in 2017-present.”

After a lot of back-and-forth between EHA and NIAID, EHA’s grant was approved. They celebrated the news, with Peter Daszak, head of EcoHealth Alliance, writing “This is terrific! We are very happy to hear that our Gain of Function research funding pause has been lifted.” 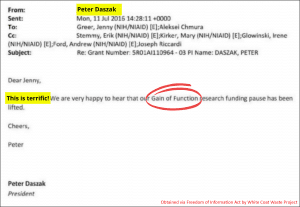 Remember when Dr. Fauci told Congress that the NIH “has not ever and does not now fund gain-of-function research in the Wuhan Institute of Virology”?

That’s looking increasingly hard to believe…especially considering that NIAID staffers raised this warning about gain-of-function research way back in 2016. 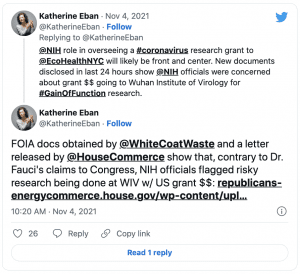 We’ve been exposing EcoHealth’s shady behavior for a long time — from their taxpayer-funded bailout, to their refusal to appear  before Congress, to their habitual breaking of transparency laws. 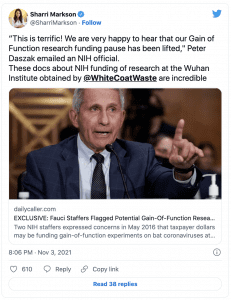 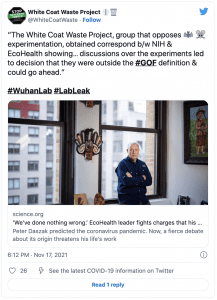 In fact, our investigators first revealed how the NIH was funding dangerous and wasteful experiments on bats and animals in Wuhan.

With the release of these new documents, embedded below, we’re getting closer to knowing the role that Fauci, EcoHealth’s animal experiments, and U.S. tax dollars played in the origins of the pandemic. 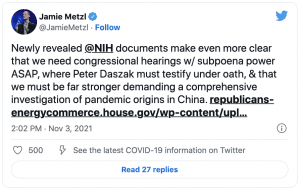 As we told the media last spring, when we filed the lawsuit: taxpayers have a right to who’s paying the bills, who’s cashing the checks, and if Fauci’s wasteful spending on animal experiments at the Wuhan lab caused the pandemic.


Take action! Urge your Members of Congress to cosponsor the Defund the Wuhan Institute of Virology Act and permanently prohibit taxpayer funding for this dangerous and cruel lab!

These evil experiments must be stopped!!!!!

We must stop this now!!