There are some things you never want to find in your yard. Sinkholes. Skeletons. Booby traps.

But if you’re South Carolina Congresswoman Nancy Mace, whose congressional district includes the state’s coastal islands, there’s something else you don’t want to find: Dr. Fauci’s island of monkey death.

After WCW investigators revealed the dark secrets of ‘monkey island’ — such as the fact that hundreds of monkeys are taken from the island every year, and then subjected to some of the government’s cruelest, most painful experiments, including being infected with Ebola virus — Rep. Mace demanded information from Dr. Fauci, whose division of the NIH owns the monkeys, bankrolls the island, and is responsible for these primate atrocities.

As first reported by Timcast, in a scathing letter (available below), Congresswoman Mace — who’s also hounding Fauci about #BeagleGate — pressed Fauci for information on Morgan Island, including the amount of taxpayer money used for NIAID’s horrifying monkey experiments, and a complete list of all experiments performed on primates since January 1, 2020. 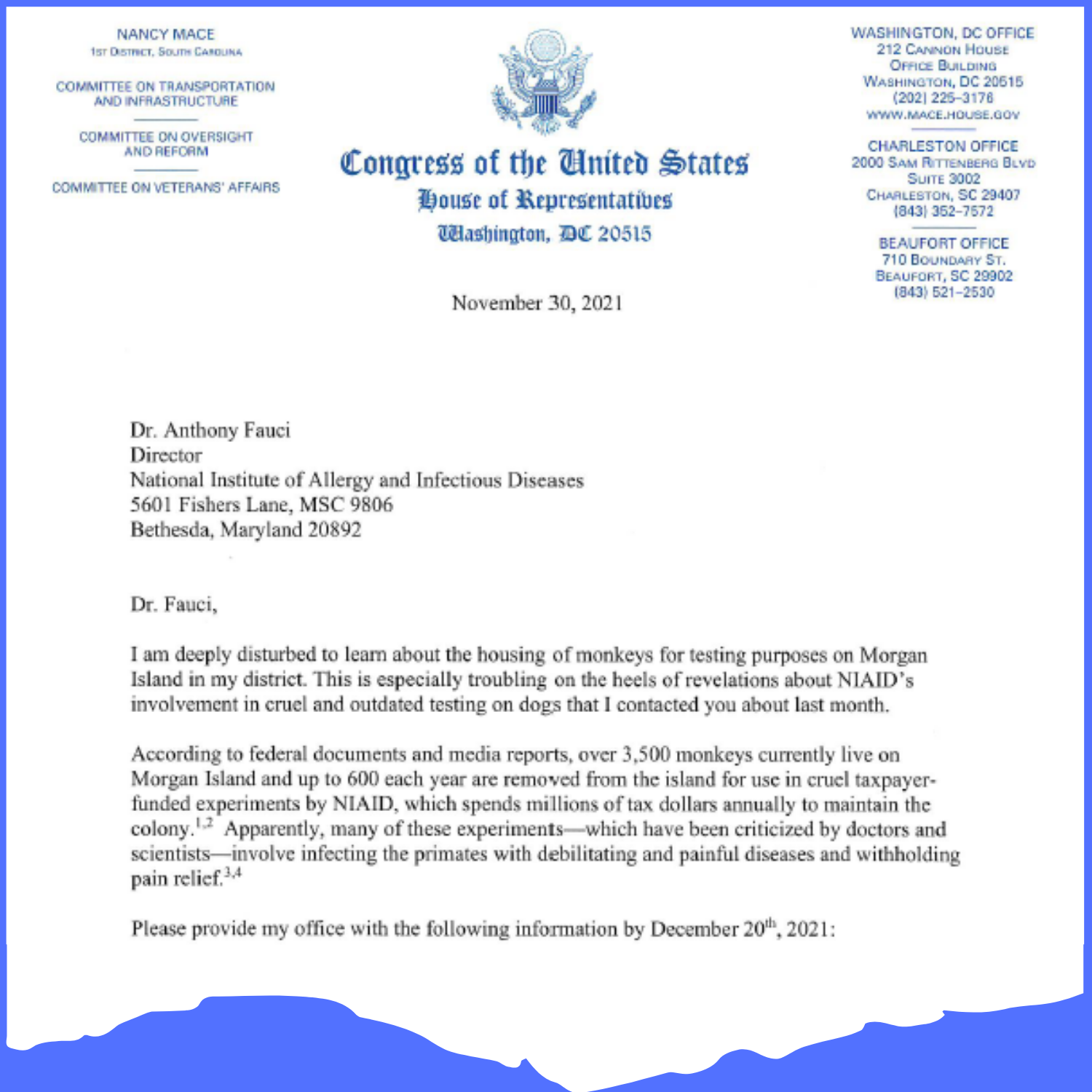 Read the full letter below

Rep. Mace concluded her letter with a VERY important question: what, if anything, is NIAID doing “to seek alternatives to testing on dogs, cats and primates”?

It’s a great question, especially in light of #BeagleGate. Many departments and agencies within the federal government are reducing, and even eliminating, their animal experiments. Thanks to WCW’s advocacy, the Environmental Protection Agency announced that it would end animal testing by 2035. We also worked closely with Congress to ensure that the Department of Veterans Affairs would phase out testing on primates, cats and dogs by 2025.

The deeper I dig into taxpayer funded animal testing, the more horrific it gets. 600 monkeys are captured every year from Monkey Island and subjected to cruel and barbaric testing, without pain relief. Just. Disgusting.https://t.co/okANy0ogdT

Take action! Sign our petition, and tell the NIH to stop its taxpayer-funded primate experiments!

Please keep me informed via your newsletter thank you.