In 2021, WCW ended more government animal labs than ALL other groups…combined.


Let’s recap the year’s top wins in the War on Waste:

Unless you’ve been living under a rock, you’ve probably seen a story or two about cruel experiments on beagles funded by Dr. Anthony Fauci.

If you’re a frequent reader of this blog, you’ve seen even more, because WCW exposed ALL of them. Six, to be precise.

WCW’s #BeagleGate campaign — the year’s BIGGEST animal testing campaign — made headlines all over the world. 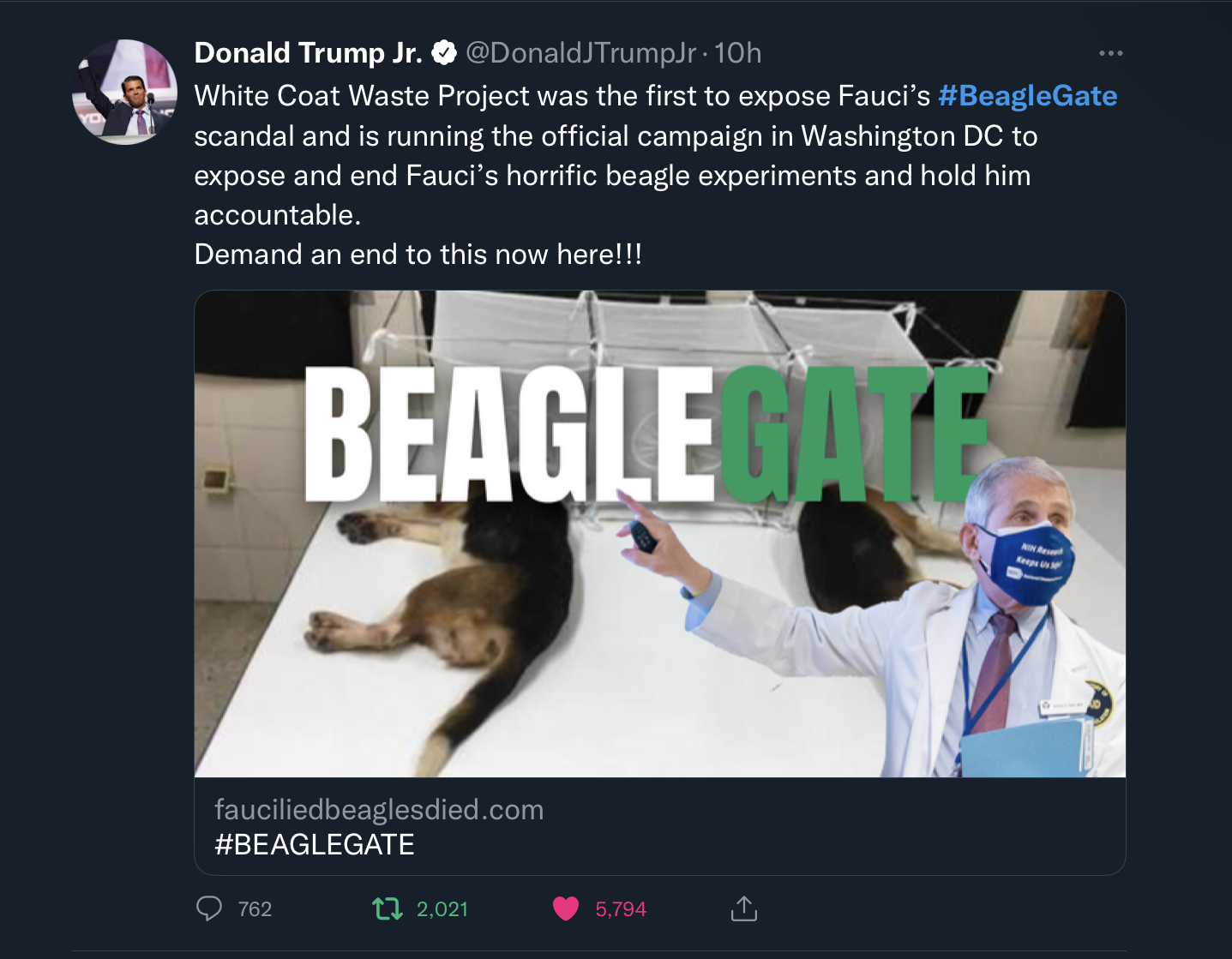 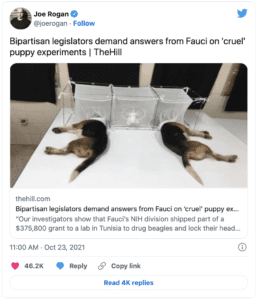 We worked with Rep. Nancy Mace to introduce the PAAW Act to defund ALL of Fauci’s wasteful dog labs — from sand flies in Tunisia to de-barking in California. 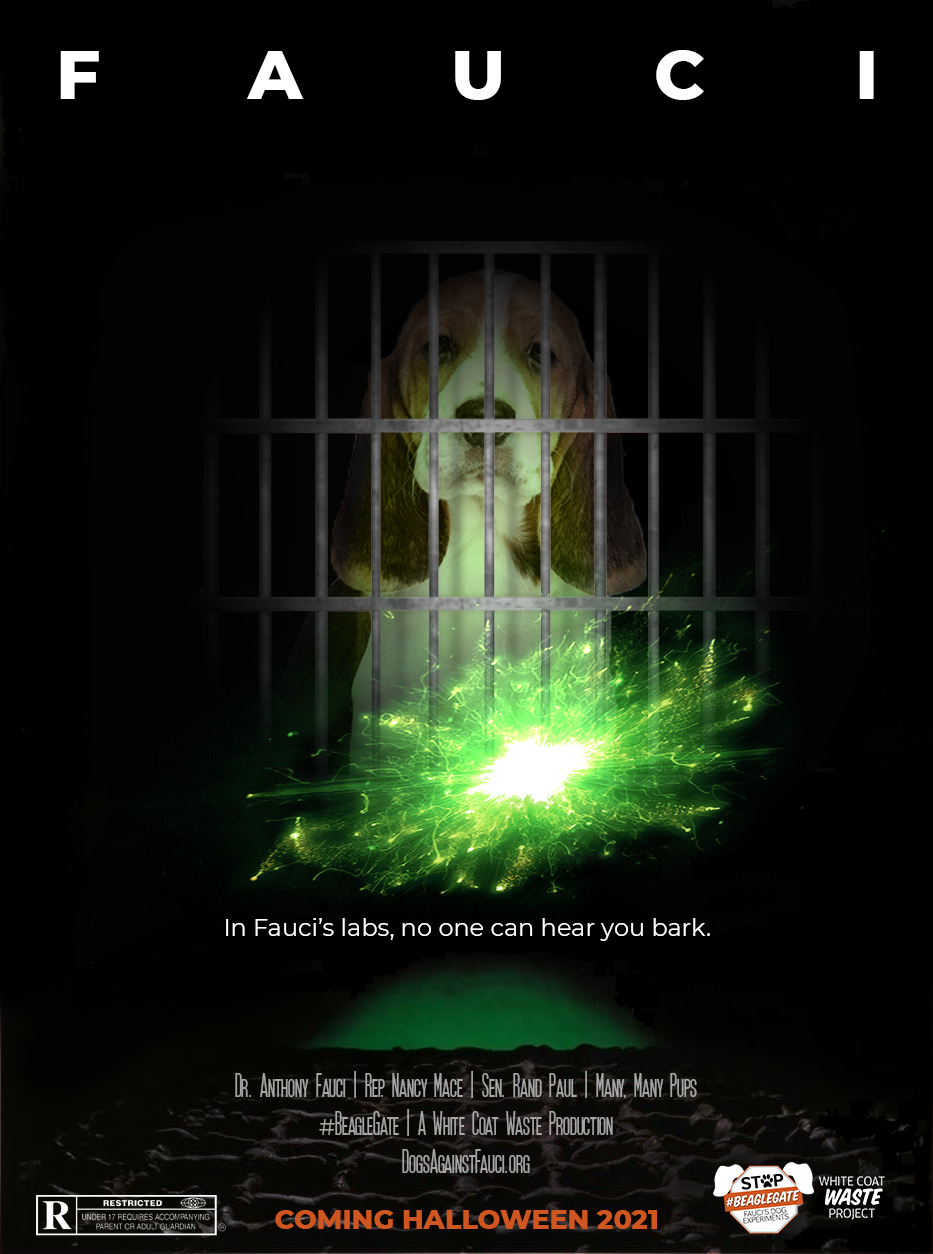 #BeagleGate also put a target on our back from The Washington Post, to Google, to even the NIH Director himself.

But we know that taking flak means we’re over the target.

We remain unbowed, unbent, and unbroken — and we will keep fighting the War on Fauci’s Waste!

We thought we were done with the Wuhan lab in 2020.

That’s when WCW first exposed how U.S. taxpayers funded animal experiments at the Wuhan Institute of Virology — the probable source of the COVID-19 pandemic.

We even got President Trump to cancel the infamous EcoHealth grant. But Washington bureaucracy runs VERY deep. 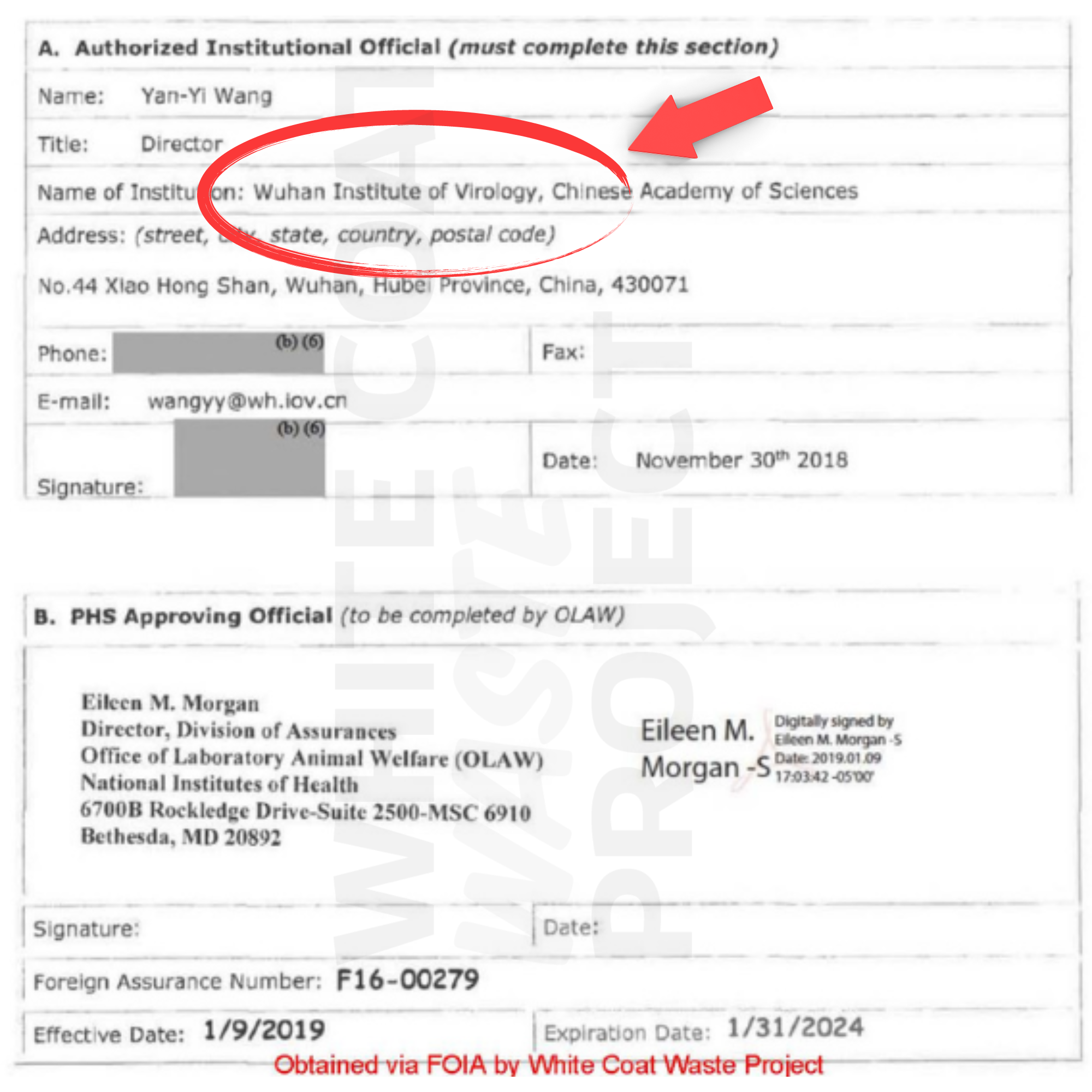 In 2021, WCW shocked the world (again) when we exposed how the Wuhan Lab is still eligible for animal testing payouts! 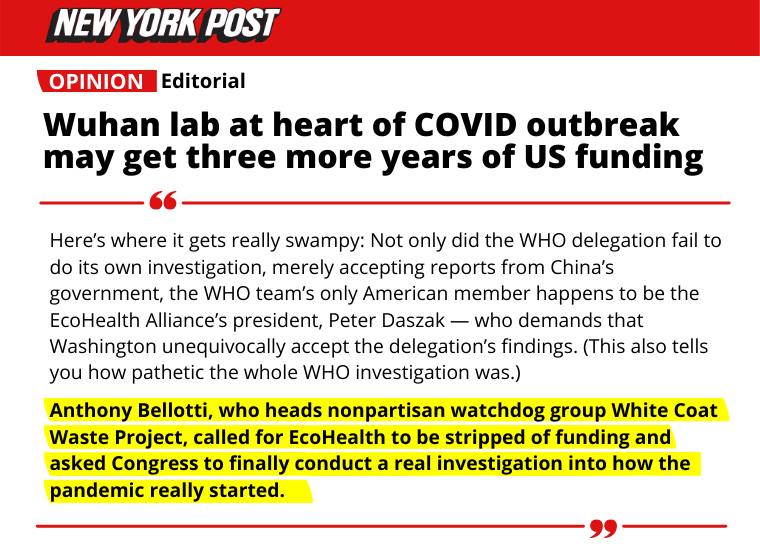 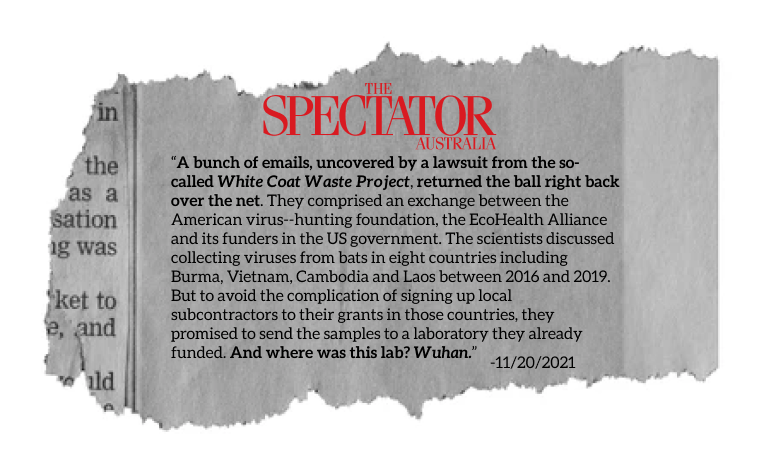 Taxpayers everywhere were F.E.D. UP! So WCW got to work again:

We even got President Biden to sign this bill into law, too! 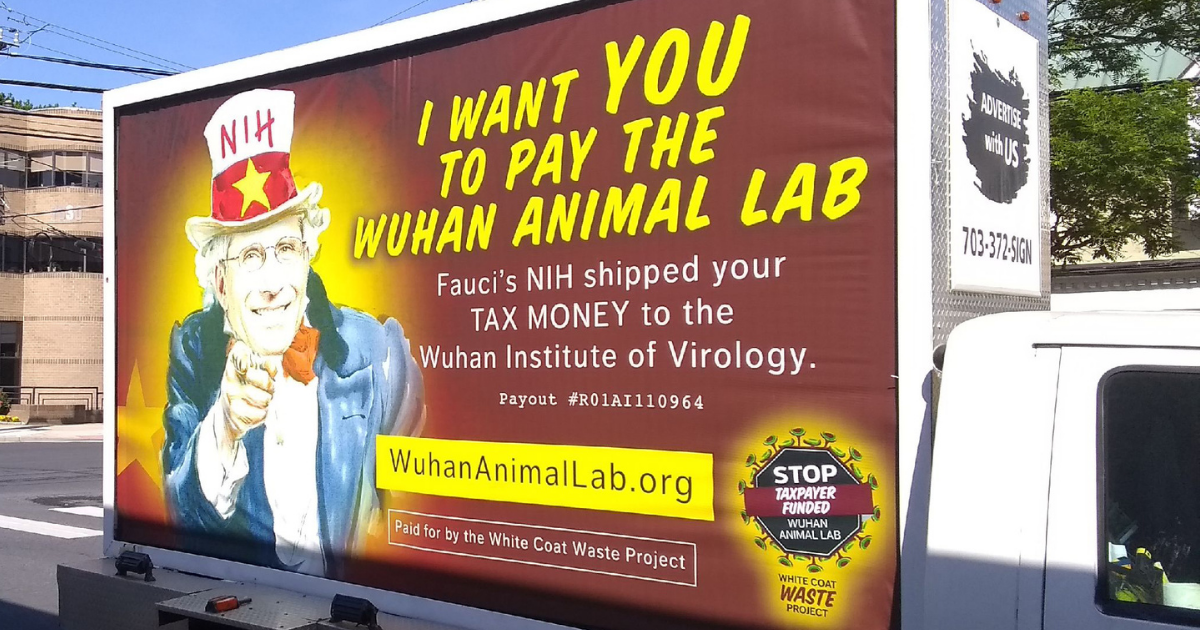 That’s what our successful Freedom of Information Act lawsuit exposed in early 2021.

The VA’s Los Angeles lab wasted $5 million to abuse and kill kittens — but WCW SHUT IT DOWN — just days after our investigation aired on CBS News! 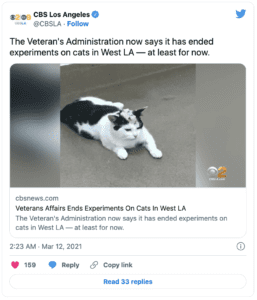 What a load of crap — literally.

This year, WCW also SHUT DOWN these ‘crappy’ experiments, once and for all. 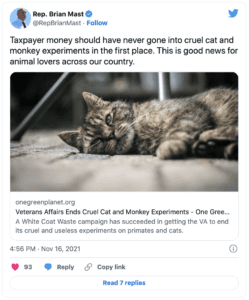 At the start of 2021, there were four painful experiments on cats in the federal government.

Now there are two.

WCW is on the verge of completely ending Uncle Sam’s Cat-astrophic waste!

WCW has been cleaning up the VA’s animal experiments for years, including the Minneapolis primate lab which — as we exposed through FOIA — had been squandering $7 million of your tax dollars on angel dust experiments. 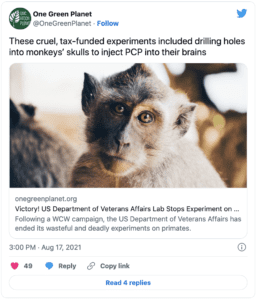 Here’s the bad news: this wasteful monkey business had been extended for several more years and approved to abuse even more monkeys.

But here’s the good news: WCW ended the experiments early! 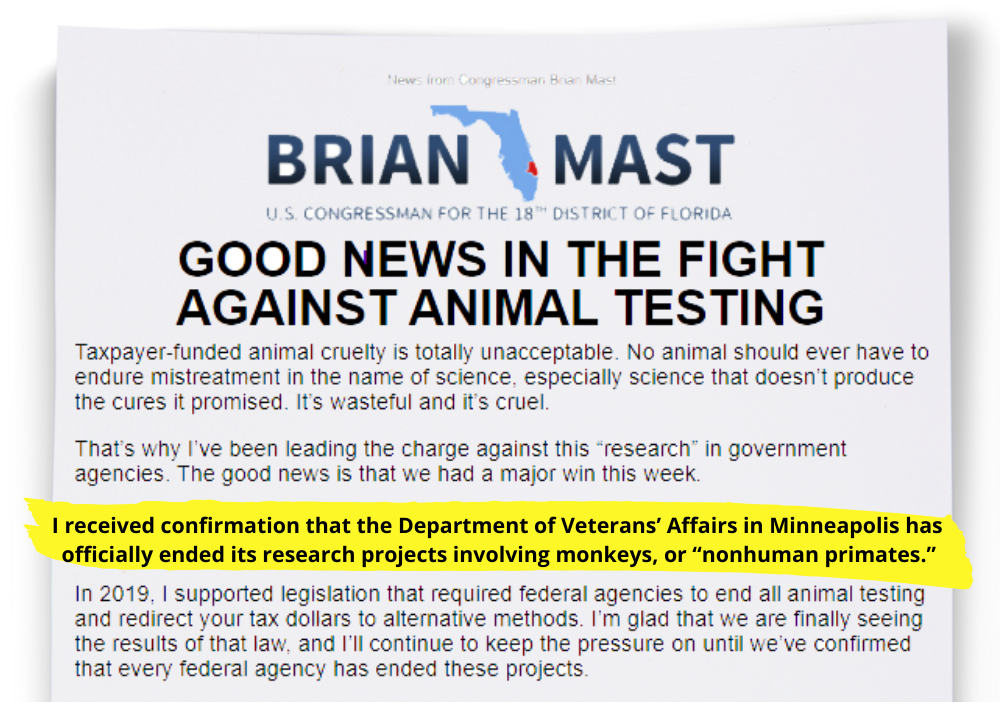 WCW also SHUT DOWN the VA lab in West Haven, CT where government white coats severed the spines of “calm [and] easy to handle” vervet monkeys, then forced them to perform dexterity tests in exchange for food.

Your tax bill for this was 9 million dollars.

We’re not going to stop fighting. There’s only one VA primate lab left.

WCW is proud to be the ONLY group to shut down a primate lab in the United States since 2015!

In May, we released Broken Bureaucracy, a first-of-its-kind investigation of how thousands of puppies are killed each year just to satisfy FDA’s animal testing mandate

Then, because we like to SOLVE problems (in addition to exposing them) we worked with lawmakers on both sides of the aisle to introduce the AARF Act.

This important bill would help Cut FDA Red Tape, allowing industry to use modern alternatives to puppies in pharmaceutical testing.

Just one month after we released Broken Bureaucracy, the House Appropriations Committee passed the FDA’s 2022 funding bill, which includes WCW-backed language directing the agency to issue a detailed report on its efforts to allow drug makers to avoid wasteful and cruel animal testing.

After so many #BeagleGate and Wuhan lab exposés, we knew that Dr. Fauci wasted a LOT of money on cruel animal experiments.

But even we weren’t prepared for the horrors we would find on Monkey Island.

Every year, around 500 monkeys are captured from their home on Morgan Island, SC and shipped to Fauci-run labs, where they’re subjected to batteries of extraordinarily painful experiments, and infected with the most dangerous and deadly diseases known to man.

WCW then accompanied Mace on this fact-finding trip: 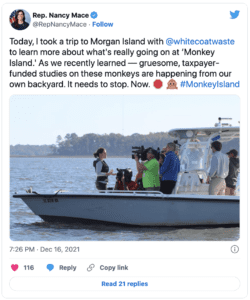 Public outcry has been loud and swift. 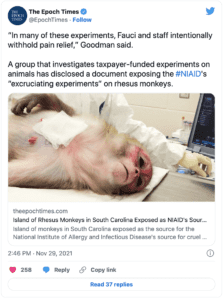 First: in 2018, WCW exposed how the Environmental Protection Agency was abusing 20,000 small mammals every year.

Then: in 2019, following WCW’s campaign, EPA announced a landmark plan to phase out all animal testing.

Next: in 2020, WCW’s launched another effort to retire the EPA’s bunny survivors.

FINALLY, on January 20, 2021 — his final day in office — EPA Administrator Andrew Wheeler worked with WCW to give EPA’s lab bunnies a parting gift: a pardon.

Now WCW is working to ensure all government agencies have policies allowing survivors to be retired after WCW closes the labs.

As part of our 2021 GiveThemBack campaign, WCW scored a key win in USDA appropriations, where there’s still no such retirement policy.

And we reintroduced Violet’s Law (aka AFTER Act) to help retire ALL lab survivors… across the entire federal government!

Government lab survivors aren’t the only ones we retired in 2021.

We also retired the government’s top lab funder, too. 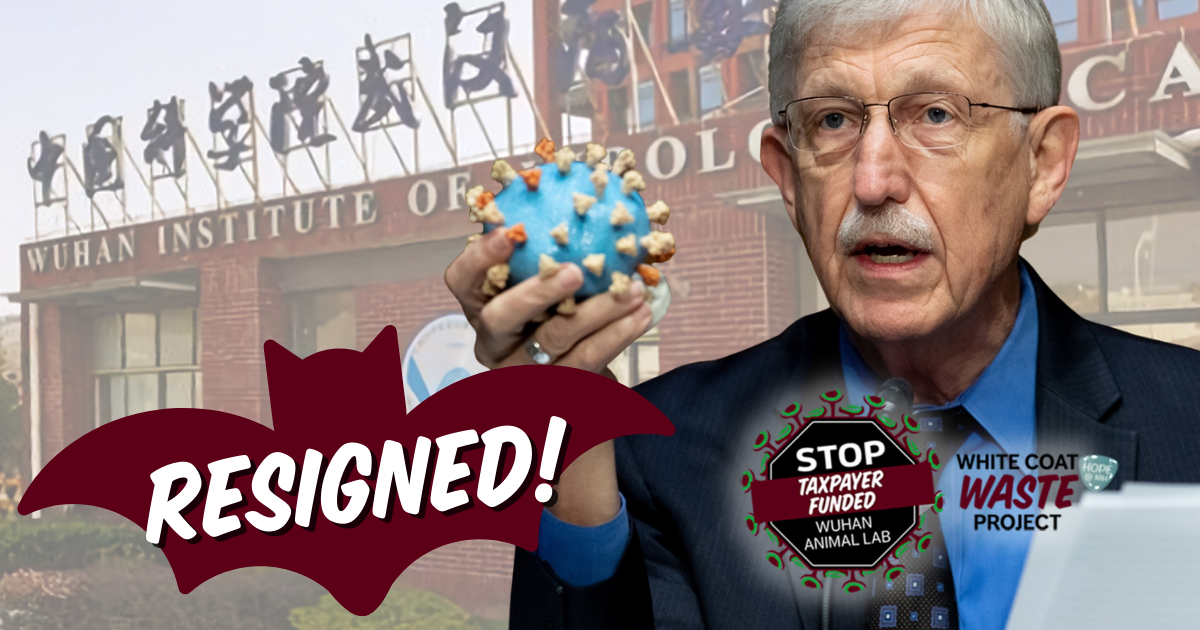 Collins (and Fauci!) supported GoF for a long, long time. But, NIH denied it. 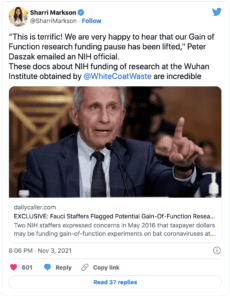 Yes, Virginia, there is GoF research at the Wuhan lab. You paid for it. And WCW just defunded it.

So in July, WCW launched a brand new investigation, Worldwide Waste, along with a new campaign to CUT NIH FOREIGN AID — because we think it’s ludicrous that U.S. taxpayers waste $140 million (!) every year on pointless and dangerous animal experiments all around the world. 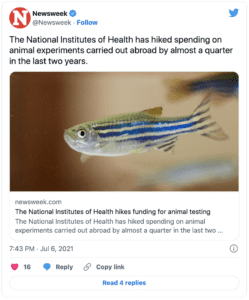 Shortly after the release of Worldwide Waste, the House Appropriations Committee included a WCW-backed measure in the NIH’s 2022 spending bill requesting information about oversight of animal experiments in foreign countries.

WCW worked with 14 lawmakers who wrote to the NIH, demanding information on these international expenditures: 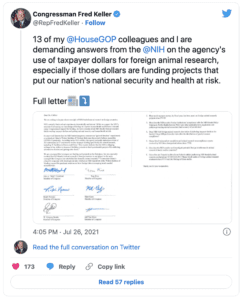 WCW also worked with Congresswoman Lisa McClain (R-MI) to introduce the AFAR Act which would prohibit your paycheck from being shipped to animal labs in foreign countries like Russia and China.

We thought so, too.

WCW is waging an unceasing WAR on WASTE — wasteful spending, wasteful experiments, and the cruel, unnecessary waste of life.

But we’re not just fighting, we’re WINNING — and the reason we’re winning is because of grassroots advocates like you.

Our average donation in was just $30.47. Unlike big groups, we didn’t take one dime of PPP bailout money either.

We couldn’t do it without you. We mean it.

Now, with your support, we’re going to make 2022 one for the record books!

All animal abuse and testing needs to stop NOW!!!! it’s barbaric and disgusting, to say the least! These poor defenseless animals.

we need to pick our knuckles up off the floor & STOP these useless, old ways of research – organ on a chip and many other ways actually work and are humane – when only greed influences a study and cruelty to animals is the results, people need to pay and our laws need to change NOW

Fauci has proven himself to be a heartless monster who spends OUR TAX DOLLARS to torture animals in useless, painful experiments on beagles, monkeys and other animals. Fauci should be in prison!!

Horrible. Why can’t they use computer models instead of animals?