FOIA TO FREEDOM: How WCW Saved Bob from the VA’s “House of Horrors” Lab in LA 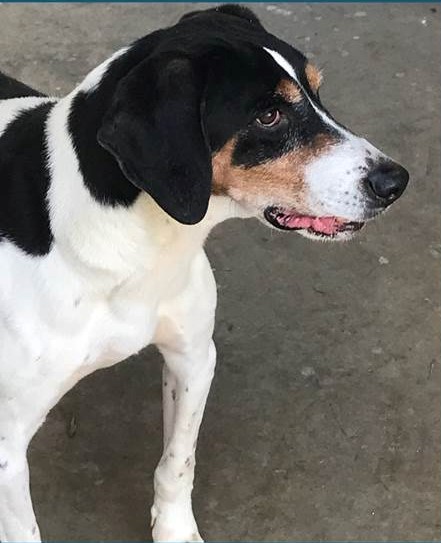 Allow us to introduce you to Bob.

Bob is a happy hound with a loving family. But Bob’s life wasn’t always so happy. Bob’s path here was long and difficult, but White Coat Waste Project is proud that we helped take Bob from FOIA to freedom.

Bob was born in February of 2008. Before his first birthday, he was shipped to Los Angeles…but he wasn’t going there for fun in the sun.

Instead, he was shipped to a secretive Department of Veterans Affairs (VA) laboratory, where we learned his name was officially CZNIAF. (Doesn’t really roll off the tongue).

WCW used the Freedom of Information Act (FOIA) to expose the Los Angeles Department of Veterans Affairs’ (LA VA) cruel and wasteful dog tests for the world to see. Bob was being subjected to experiments to test medical devices. 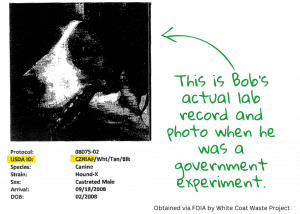 After learning about Bob and the other dogs imprisoned at the LA VA, we were fortunate to meet a whistleblower who lived at an adjoining VA facility, where he was able to see dogs being led out into a concrete lot behind the laboratory. This brave individual, an Iraq veteran, didn’t know what the VA was doing with Bob and these dogs — until he read about our campaign. The whistleblower was shocked to learn what was going on behind closed doors at the VA, calling their dog lab a “house of horrors.” 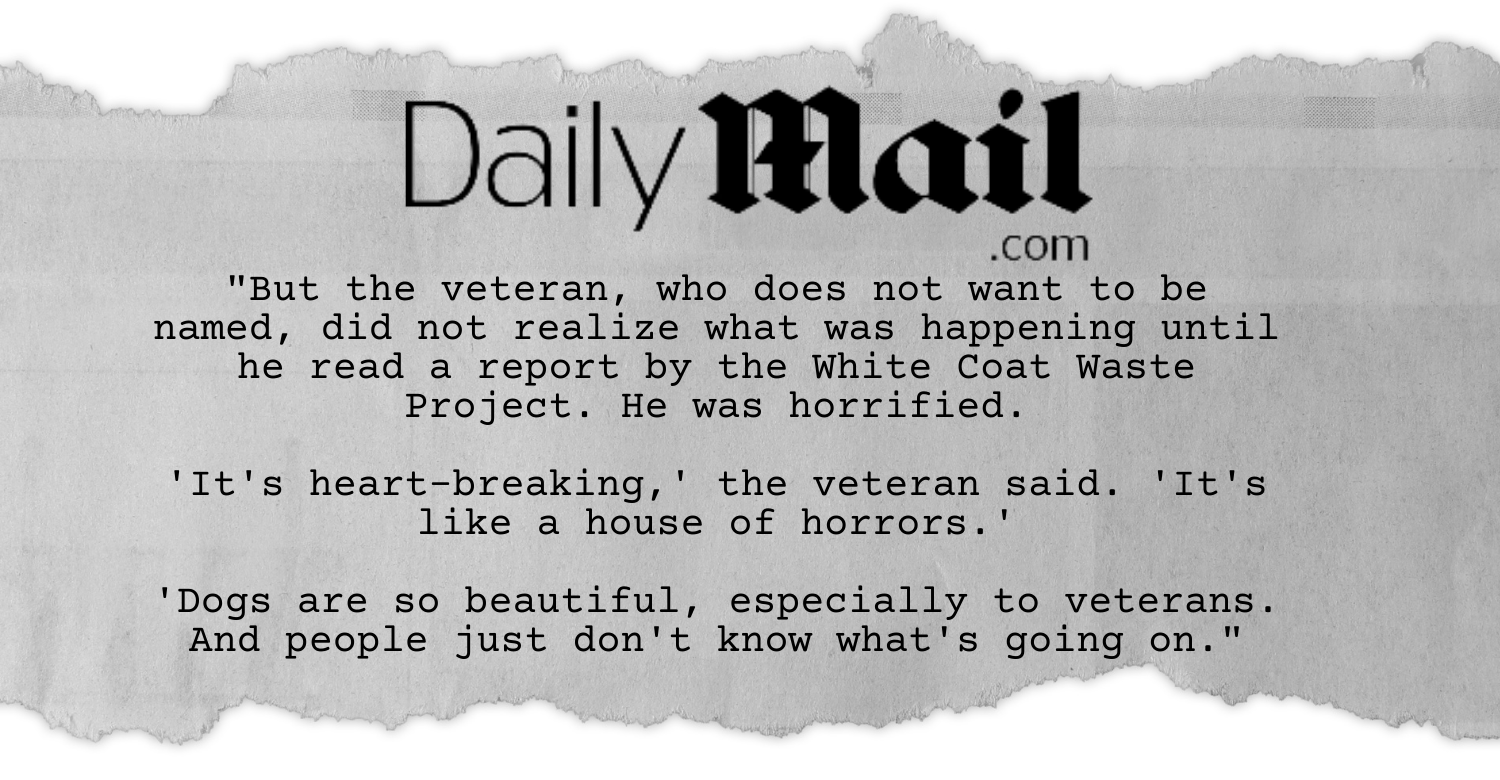 The whistleblower was able to snap a few photos of the dogs he saw, including Bob:

Public outcry was swift and fierce. After WCW whipped up a maelstrom of bad press, mobilized an army of angry taxpayers, and rallied Republicans and Democrats in Congress, the VA announced it was shutting down some of its dog experiments, and canceling future experiments it had planned.

The experiments Bob was used in were ended, too, and he was spared from death. 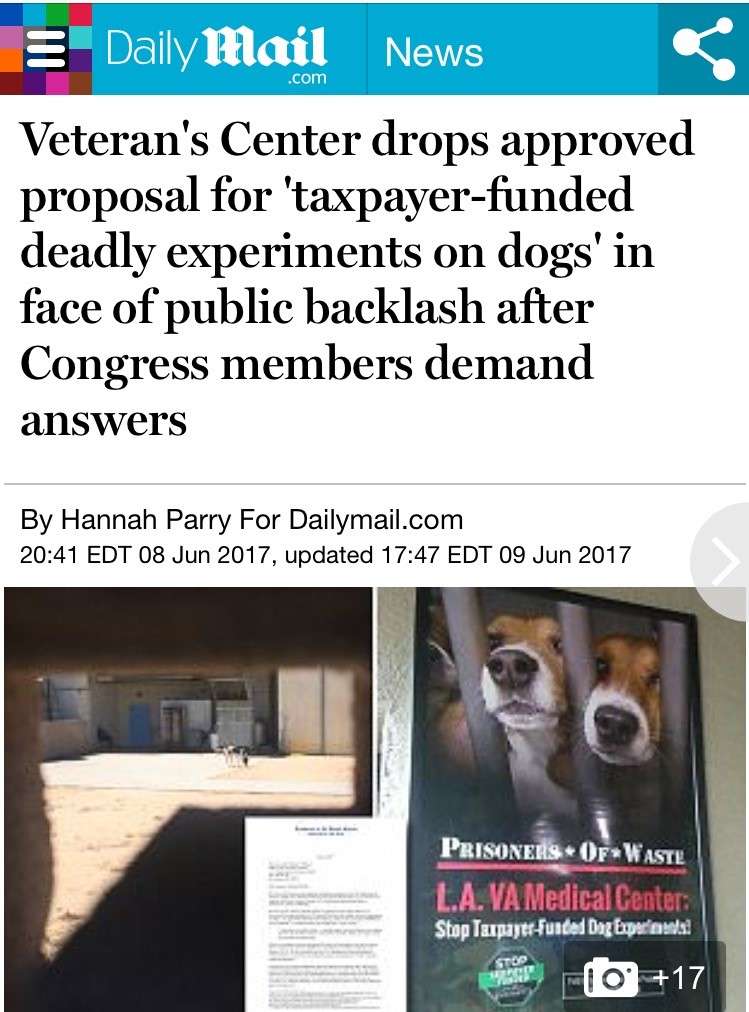 Following WCW’s campaign, the VA has also cut its dog testing by nearly 80 percent and ended its primate experiments in Minnesota and in Connecticut. We also ended the VA’s kitten experiments at the same lab in Los Angeles, as well as its “cat-stipation” experiments in Cleveland, too.

🐵 In 2018, WCW shut down the FDA’s $5.5 million nicotine addiction lab…then we retired and released these 26 squirrel monkeys to a warm Florida sanctuary.

😻 In 2019, WCW closed the USDA’s $22 million “Kitten Slaughterhouse” lab…then we adopted out Delilah, Petite, and the 14 cat survivors. Check out their Capitol Hill field trip to meet the legislators who helped save them!

🐰 And, in 2020, WCW exposed and ended the EPA’s taxpayer-funded animal testing program…then we got Administrator Wheeler to pardon the bunny survivors.

Your tax dollars purchased these animals. So after WCW finds, exposes, and defunds the abuse, government white coats should #GiveThemBack. Survivors deserve a second chance to live out their lives in peace and happiness…like Bob.

Thanks to @WhiteCoatWaste for helping me & my colleagues expose how the LA VA drugged & killed dogs in experiments. https://t.co/EiCXmMiNE9

Violet’s Law would ensure that USDA and all government labs develop an adoption policy for its animals, just as the VA, the NIH, and the FDA have already put in place.

Take action! Urge your Members of Congress to cosponsor the AFTER Act — aka Violet’s Law — to provide a second chance to animals abused in wasteful government experiments!

Vile and despicable people work at these alleged research facilities where their alleged professionalism amounts to caging, torturing, brutalizing and killing animals. Can you imagine the kind of people whose careers result in such horrors? They should be banished from society — in the harshest manner possible!

why a second chance, should not happen to begin with, so if they are keeping and allowing animal lab torture to continue, what’s the purpose, this is ongoing from government. so you want money to help help animals after the torture is stupid. shut it all down

I agree completely!!!!! This needs to be stopped all together!!! These dogs should never have to go through such stupid testing for stupid reasons for stupid people!!!!!!!!

So True!! It is pitiful!

” Bob is Avery beautiful Treeing Walker Coonhound” all of these animals should be rescued and saved from all of this torture!!!!!!! Thank God for u’se getting him out!!!!! He can actually have a live. How bad was he when you’se got him & the others out of there ???? We love you ” BOB !!!!!! “

John Hopkins university has an ongoing dehumane with animals right now…i read it in an article about a week ago. Sad that dogs, cats, n others are being tested on but this article was just too much. On the other hand, the article i just read above gives me hope now that these cruel people are being stopped,but we have much more work to do.

I agree, we all have to stay on there butts about this. These poor innocent defenseless animals don’t deserve this. God didn’t put these precious animals on earth for these sick vile lowlife pathetic disgusting POS to torture and kill for their own demented satisfaction and money!!!😡🤬

I cannot think of one reason to not giving these innocent, tortured animals their chance for a new life with someone who would actually have compassion, love and would be willing to treat these animals with the respect they deserve. Please seriously consider closing all the experiment labs & allowing every animal, no matter what species, a peaceful, rest of their life experience. Thank you for considering this request.

Enough with the animal testing already. It must stop now!
Incredibly cruel as well as ineffective.
Please find alternatives.
Thank you.
Suzanne

Enough with the animal testing already. It must stop now!
Incredibly cruel as well as ineffective.
Please find alternatives.
Thank you.
Suzanne

I hate what WCW uncovers but i love what they do. The links in your testimonials show real results and that’s why i never mind chipping in albeit a meager amount. Please please please don’t stop. Keep fighting for both animals and our tax dollars.

If some of these poor, deluded people really believe that they are advancing the cause of science, their formal education wasn’t comprehensive enough (I use the term ‘education’ advisedly because nowadays, people confuse academic qualifications with true ‘education’). Although this might have been the case in the past – nowadays – pah.. !! Either memory regurgitation and/or multiple-choice questions that don’t remotely stretch the brain’s processes are what pass for the ‘examination’ procedure and then the award of a degree or certificate.

However, there are also some who genuinely have no compassion and who subscribe to Descartes’s view of animals as not really being sentient creatures; they would probably have been right at home in Hitler’s Nazi Germany and other contemporary totalitarian regimes around the world..

How they can possibly justify their senseless experiments – that more often than not do not work and have no bearing on helping mankind – is beyond me.

They are a disgrace to the human race; if indeed, they are really human; often wonder if people like them actually have souls..??

You know that Faucci was also behind this, right???!!! But he’s such a big deal now, he’s letting Collins take the fall for them both!😡

Abusing animals is a crime, a very serious crime.

Thank you! Any chance we can aim our sights on pharma companies too? Some of them in our area pay ppl to round up ‘stray’ cats..

Stop all animal abuse and neglect. Stop all experiments and let’s institute laws in all areas of animals that protect them from harm.

Please stop these useless experiments on these poor innocent animals.

Just stop torturing poor animals. It’s just ridiculous and cruel. These people that do this need to rot in hell

Use horrible monsters who are on death row!!! Not innocent creatures

SAVE these animals at all costs! They deserve to be respected & protected always!!!

These are all feeling, fearful, warm beautiful living creatures. No one, no place, no research has a right to torture innocent, helpless animals, EVER.

Animals are angels sent down. They are loving and loyal animals that are only here to do us good and love us. They deserve nothing but love at the very least. So let’s do everything possible to keep them safe and loved.

Please stop the abuse on all of these helpless animals!!

Please stop this horrible cruelty to God’s animals!
God did not put those precious dogs or cats on earth to suffering from experiments. Experiments and testing on animals are the most cruel, abusive, horrific and unethical situations for animals on the planet. No animals deserve to be locked up in a lab and torturing them for medical reasons or junk science. The Lord is coming to judge everyone to convict all the ungodly acts they have done to tortured these poor innocent defenseless animals.
All God’s animals matters!! Read God’s words Proverbs 12:10