Waste of the Week: Edible Arrangements

This edition of Waste of the Week is called “Edible Arrangements.”

We’re not talking about the chocolate-covered fruit baskets you send when you have no idea what to give someone. Nope — we’re talking about cannabis edibles.

‘Edibles’ are foods or beverages infused with marijuana. They’re frequently used by medical cannabis patients, as the dosages are standardized, and they don’t need to be smoked. They’re also popular among the usual suspects: college students, music festival aficionados, and libertarians.

They’re also popular among animal experimenters. White Coat Waste Project (WCW) has discovered a suite of experiments at Oregon Health and Science University (OHSU) in which macaques, both male and female, are given edibles, in order to assess the effects of THC on the primates’ reproductive health.

In the first experiment, 8 female macaques were given a THC edible daily, for up to four months, to see whether THC affected their menstrual cycles.

In the second experiment, 6 male macaques were given a THC edible daily, for up to seven months, to see whether THC affected their fertility.

You’re paying for these experiments — and the price tag is so high, even Snoop Dogg would blush: the project received over $14 million in 2021 alone.

But you wouldn’t know how much you were paying for these experiments, even if you dug deep and searched for OHSU’s press releases about them. (We did it for you: they’re available here and here). Even though the releases do indicate that the experiments were “supported by National Institutes of Health grants,” they fail to include three specific elements:

Including these three data points in press releases isn’t just good for transparency — it’s federal law. Called the “Stevens Amendment,” these pro-taxpayer transparency requirements have been included in government funding bills for over thirty years. 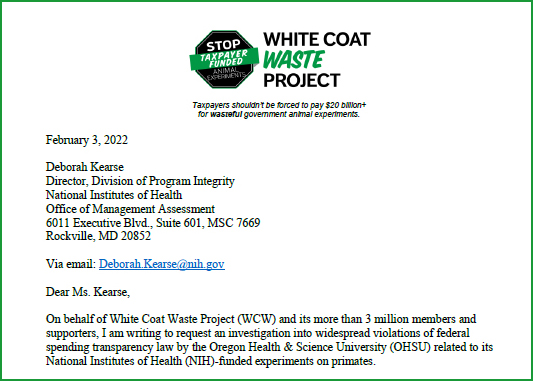 Read the entire letter below

OHSU’s ‘edible’ experiments broke the law…so WCW made ‘arrangements’ to hold them accountable. We filed a complaint to the National Institutes of Health (NIH), outlining OHSU’s Stevens Amendment violations. (Read it below!)

Maybe experimenters were embarrassed to disclose the costs of their monkey business to the public…especially since, because cannabis is legal for recreational and medical use in Oregon, studies with human volunteers would have been easy to arrange.

Is this how you want your money spent?#AddictedToSpending

This is why the COST Act, introduced by Rep. Ralph Norman (R-SC) and Sen. Joni Ernst (R-IA), is such important legislation. The COST Act would strengthen enforcement of transparency law, making it possible to withhold funds from institutions that don’t comply.

With so many universities flouting the law, it’s long past time for a #RogueLabRollback.

Take action — contact Congress and tell them to pass the COST Act today!