WCW Has The Proof: NIH Buys Puppies From Envigo “Puppy Mill”; Kills Them

Shortly after Christmas 2021, The Washington Post broke the story that Envigo, one of the largest lab beagle breeders in America, was cited in July by the U.S. Department of Agriculture for widespread animal welfare violations in its Cumberland, Virginia facility. During a seven-month period, over 300 puppies died. Dozens of beagles were found with fight wounds; others were severely diseased. Nursing mothers were deprived of food for nearly two full days.

Unfortunately — though unsurprisingly — Envigo received no fines or penalties for their misbehavior.

Knowing Envigo’s horrible track record, one question comes to mind: who on Earth would purchase animals from this company?

If you’re an American taxpayer, the answer is simple and sad: you did.

White Coat Waste Project (WCW) has obtained exclusive documents via Freedom of Information Act (FOIA) requests revealing that one National Institutes of Health (NIH) lab has purchased over seven dozen beagles from Envigo since 2019 alone, some as young as one year old, at a cost to taxpayers of between $1,000 and $1,500 per dog. 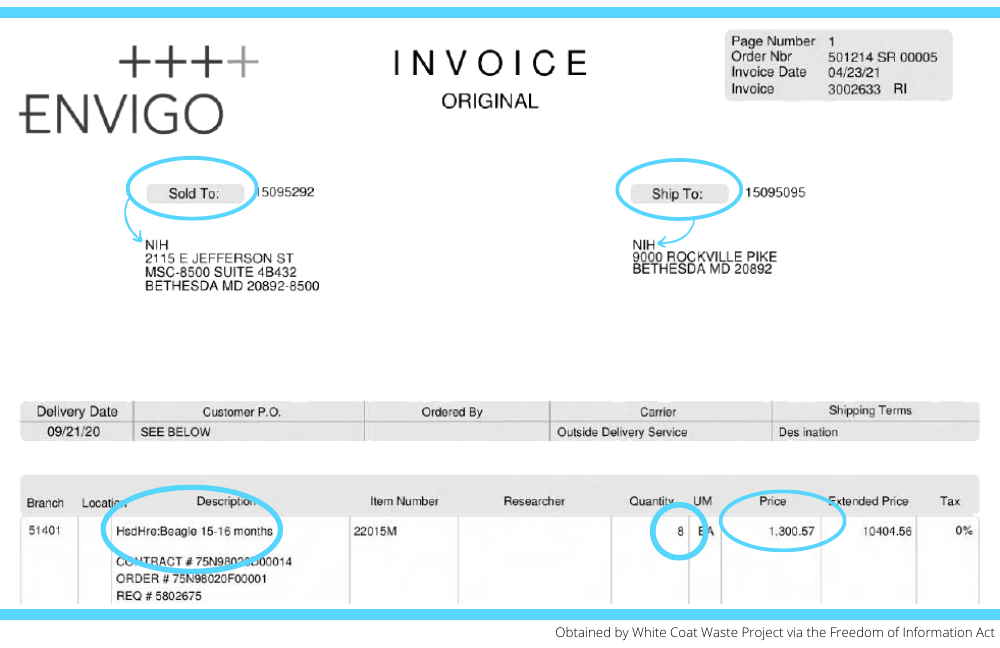 These dogs have a dismal life in Envigo’s breeding facilities. Sadly, it does not improve once the NIH takes ownership of them — because that’s when the painful, cruel experiments begin.

The NIH purchases these dogs in order to use them in deadly “toxic shock” experiments. The experiments are categorized as “Category D,” meaning they involve significant pain and/or distress.

Based on the details of the experiments, that’s an understatement. Experimenters take the young dogs, cut their throats open, and implant pneumonia-causing bacteria directly into their lungs.

Then they wait to see how quickly the dogs die.

Any dog who survives 96 hours is considered a “survivor.”

The reward for “surviving” is immediate euthanasia.

It’s tragic that taxpayers are forced to foot the bill for these outlandishly cruel experiments.

Making matters even worse, these experiments have been done before. One particular experiment that your taxes are funding has been active for over 12 years, while toxic shock research in dogs has been funded by taxpayers for two decades. Each year brings new purchases of dogs, and new deaths; these experiments are not just painful and cruel, but duplicative and wasteful to boot.

What happens to some of the Envigo dogs? Taxpayer funded research exposed @8NEWS https://t.co/XX50yx3FSf

The recent violations aren’t Envigo’s first misstep. The company’s subsidiary that deals dogs to labs was formerly named Hazelton Research Products, a firm with a long and troubled history. In 1989, several dozen macaques died at one of their facilities in Reston, Virginia. When attempting to discover the cause of the monkeys’ death, scientists were horrified to find that the monkeys had contracted the Ebola virus — and that four workers at the facility had been exposed to the deadly virus. While most Ebola cases have a fatality rate of 90%, this particular strain of Ebola was, amazingly, not harmful to humans. The workers were unharmed, and a dire pandemic was narrowly avoided.

All 450 monkeys at the facility, however, were killed.

Do you think the company learned their lesson? Not even close — because the same thing happened in Texas in 1996.

No wonder they changed their name!

It’s time to tell Uncle Sam that enough is enough.

Take action — contact Congress and tell them you don’t want your tax dollars wasted on abusing dogs in cruel experiments!

Why and how can this be stopped? How can anyone do this to precious defenseless puppies? This is pure evil! And fir tax payers to oay for this is unfathomable! God help thus world! 😭😭😭