Posted by MaryAnn Hussey
Nothing moves faster than the speed of light. It’s the universe’s speed limit. There are some things that come close, however, like cosmic rays and subatomic particles…

…and shady nonprofit EcoHealth Alliance’s ability to slurp up taxpayer money whenever it becomes available. 😡🤬😡

If you need a quick refresher on EcoHealth Alliance (EHA), they’re the group whose dangerous and wasteful experiments at the Wuhan Animal Lab may have unleashed the coronavirus pandemic on the world. We were the first to reveal that U.S. tax dollars funded their risky animal experiments in Wuhan. We caught them violating federal transparency law and also admitting to sending bat samples from Laos to the Wuhan Institute of Virology, so the coronaviruses the bats contained could be studied. We also published emails from EHA’s president, Peter Daszak, calling it “terrific” that “our Gain of Function research funding pause has been lifted.”

In other words, we caught them red-handed, admitting to gain-of-function research.

Our findings were so explosive that they helped force the resignation of longtime NIH Director Francis Collins.

Given EHA’s extremely dubious track record, the House and the Senate have both voted to defund them. At the end of 2021, Congress banned EHA from receiving any money from the Department of Defense for experiments in China.

And yet, despite all that…they’re back at the trough.

Worse still, the $4.7 million project (paid for by you!) began LESS THAN A WEEK after the National Institutes of Health revealed that EHA did indeed perform gain-of-function research at the Wuhan Animal Lab… and then didn’t report it, in violation of the terms of their grant.

We knew that Congress and the media would be VERY interested to hear about USAID’s recent largesse with EHA. We thought they might be a little angry that these bad actors have continued to receive taxpayer funds.

We quickly shared the news…and our prediction was right. Congress was DEFINITELY mad.

On February 7, 2022, Congressman Guy Reschenthaler (R-PA), who has been leading the charge to defund EHA, along with 25 fellow Members of Congress, sent a letter to USAID Administrator Samantha Power. Their letter, which you can read in full below, demanded information about USAID’s recent grant.

Rep. Reschenthaler’s letter pulled no punches, asking questions we all want answered, such as “Did USAID consider EcoHealth’s collaboration with the WIV and compliance failures, as well as the troubling conduct of Dr. Daszak, when awarding the organization $4.7 million in taxpayer dollars?”

So did Fox News:

EcoHealth Alliance has repeatedly prioritized the agenda of the CCP over the interests of the American people.

And soon it was everywhere:

I joined @GReschenthaler in DEMANDING answers on USAID’s continued use of taxpayer dollars to fund EcoHealth Alliance, the group that funded gain-of-function coronavirus research at the Wuhan Institute of Virology prior to the pandemic! https://t.co/CRPx3RQIMH

It all comes back to our motto: F.E.D. 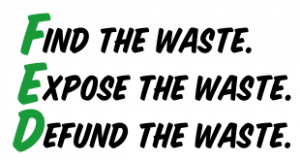 We Found the waste.

We Exposed the waste.

If bad actors like EHA refuse to follow federal law, they should stop getting federal money. Sound sensible? We think so, too.

You can help make this happen — contact Congress, and tell them to pass the COST Act today!