They say good things come to those who wait. It’s a cliché, for sure, but that doesn’t mean it’s wrong — at least not when it comes to this year’s federal budget. After months of waiting, the federal spending bill for 2022 was passed by Congress and signed into law on March 15, 2022. The gigantic federal spending bill — called an “omnibus,” because it combines all 12 spending bills into one huge package — contains many crucial WCW-backed provisions that protect animals and slash wasteful and cruel animal experiments.

Throughout 2021, our millions of taxpayer advocates spoke up and reached out to Congress — and the message seems to have been received loud and clear. Thank you!

Back in July, White Coat Waste Project’s “Worldwide Waste” report uncovered that, in 2020, the NIH spent an estimated $140 million on animal experiments in foreign countries — where there’s little transparency and accountability about how animals are treated and how the money is spent. Shockingly, these countries include nations deemed “adversaries” by the U.S. State Department, including China (Wuhan, anyone?).

When our report was released, Congress was shocked:

Iowans & Americans deserve to know how their hard-earned tax dollars are being spent. My COST Act would do exactly that. https://t.co/5AOKoBVEqZ

We’ve found and exposed wasteful spending worldwide. Next up: defunding it.

The Wuhan Institute of Virology — aka the Wuhan Animal Lab — does horrible things to animals with your tax money. And, as we all know by now, its BATSH*T CRAZY animal experiments may have been the origin of the coronavirus pandemic.

Given all this…why is it still eligible to receive your tax dollars?

Apparently, Congress wondered the same thing. The omnibus spending bill prohibits the Department of Defense from spending any of your money at WIV.

It’s a good start — a great one, in fact — but there’s still more work to do, and we’re not going to stop until every single government department and agency is prohibited from spending your tax money at the Wuhan Animal Lab.

Way back in 2019 — which feels like AGES ago — we shut down the USDA’s $22 million “Kitten Slaughterhouse.” In the process, we got over a dozen cats adopted out from the lab into loving homes.

Since then, we’ve been working nonstop to get the U.S. Department of Agriculture (USDA) to join other federal agencies in creating a retirement policy for the animals in its labs.

Every time we asked, however, USDA said no.

But Congress has other plans.

The FY22 federal spending bill includes WCW-backed language, directing the agency to establish a retirement policy for lab animals when they are done being used in experiments. 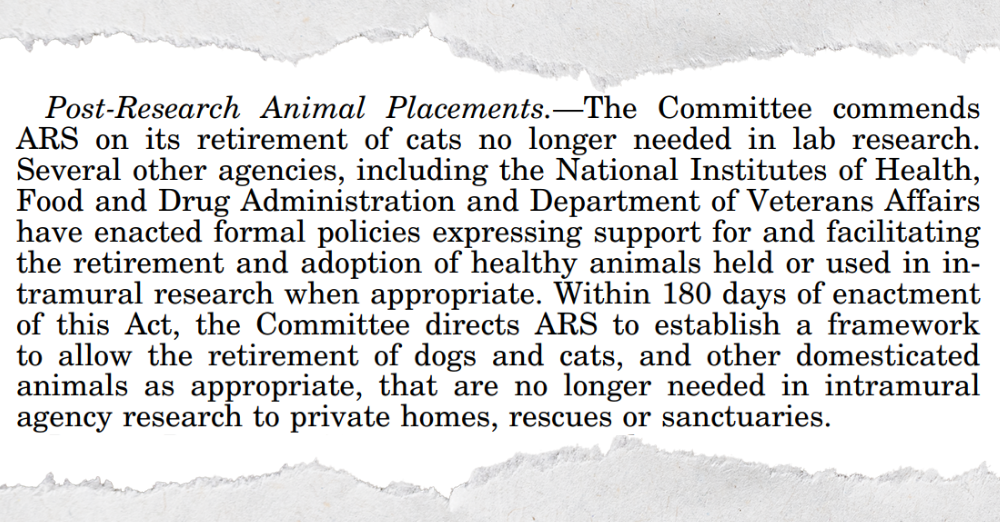 Poll after poll has found that Americans are supportive of adopting out animals after experimentation, instead of cruelly (and wastefully) killing them. We’re glad Congress agrees.

A bipartisan array of Members of Congress and Senators, recognizing the Broken Bureaucracy at the FDA, have spoken out about the need to cut FDA red tape…and save a whole lot of animals in the process.

The just-passed federal spending bill is a huge step forward, because it includes WCW-backed language directing the FDA to report on its efforts to allow drug makers to avoid wasteful, slow, and costly dog (and other animal) testing mandates, and use alternatives instead.

There’s still work to do, and still progress to be made…but this is a giant leap in the right direction. 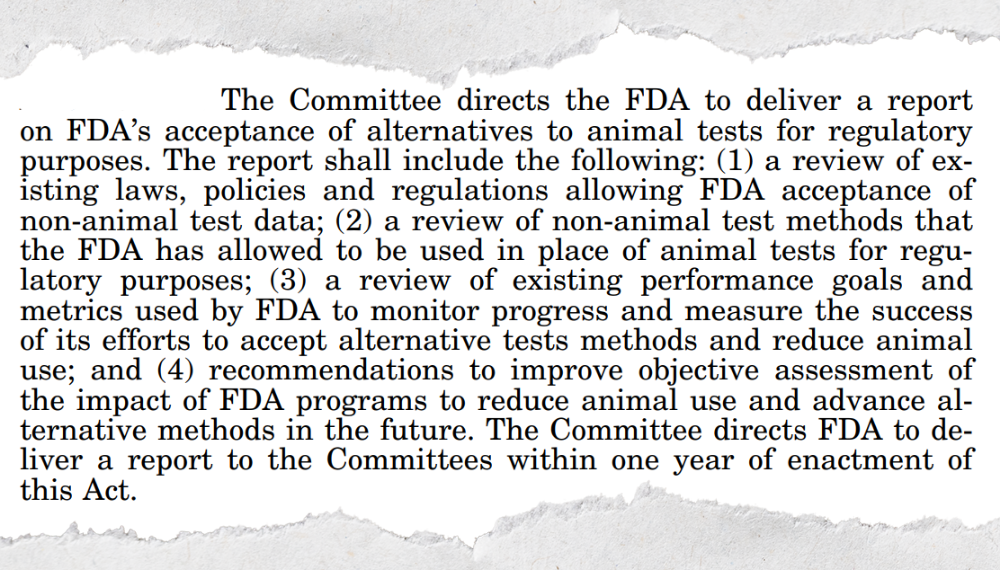 For years, WCW has been working to cut government monkey business. And if we can pat ourselves on the back for a moment…we’ve been wildly successful at it. We’ve exposed the NIH Fear Factory, revealed the horrors of Monkey Island, shut down the West Haven VA’s cruel primate lab, and much more.

We’re particularly proud of what we’ve accomplished at the U.S. Food and Drug Administration (FDA). In late 2018, 26 baby squirrel monkeys were released from an FDA lab, after White Coat Waste Project successfully shut down a wasteful $5.5 million nicotine addiction experiment.

Working with lawmakers on both sides of the aisle, as well as famed primatologist Dr. Jane Goodall, WCW helped ensure that these primates would spend the rest of their years in peace and happiness. We successfully convinced the FDA to relocate the surviving monkeys to a sanctuary.

That was the first time in FDA history that primates had been retired to a sanctuary…and Congress is making sure it’s not the last. The just-passed spending bill contains language directing the FDA to “prioritize alternative research methods to relocate primates to sanctuaries.”

This is great — but you know what’s even better than retiring primates to sanctuaries? Not doing experiments on primates to begin with.

That’s our goal…and, with your help, we’re getting there!

For the last several years, thanks to WCW’s lobbying, federal spending bills for the Department of Veterans Affairs cracked down on wasteful dog, cat, and primate testing. The bills have also contained historic language directing the VA to formulate a plan to phase out testing on dogs, cats and primates by 2025.

This year’s bill keeps the momentum going strong, once again preventing any new experiments on dogs, cats, or primates at the VA without the express, written consent of the Secretary. This restrictive language has effectively prevented new experiments from starting in years. 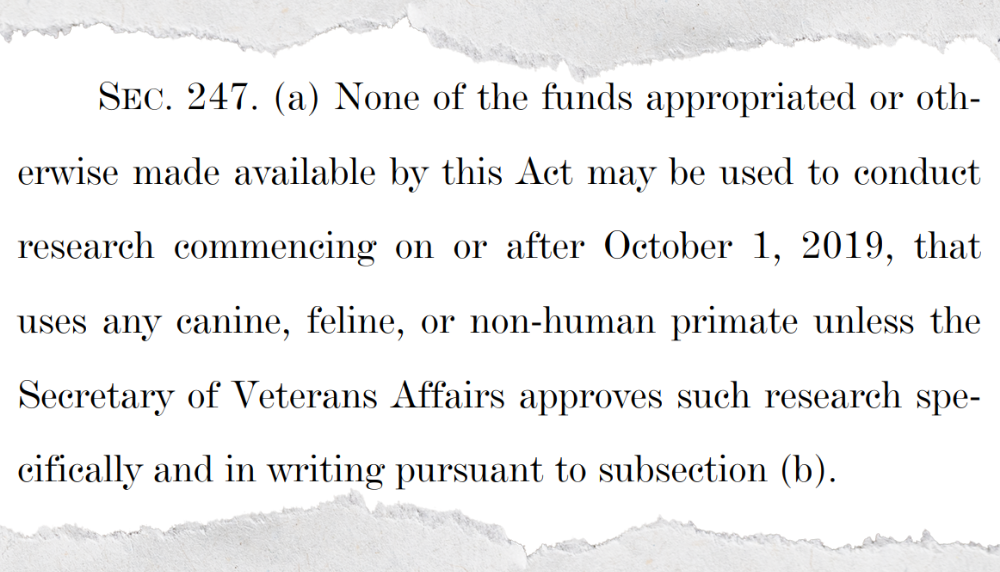 Last year, five dozen (bipartisan!) Members of Congress called for an end to experiments on dogs and cats at the VA. While this spending bill doesn’t completely ban VA animal experiments, it makes it harder and harder for the VA to experiment on animals. And with WCW’s tremendous success at shutting down wasteful and cruel VA experiments on dogs, cats, and primates nationwide, we’re hopeful that there won’t be any left by 2025!

We’ve said it before, and we’ll say it again: taxpayers shouldn’t be forced to pay $20 billion per year for wasteful and cruel animal experiments. Every year, we make progress — but we couldn’t do it without your help.

Just a question, I thought the VA exists to provide health care to our veterans. Why are they doing animal experiments at all.

There is absolutely no excuse for the inhuman experiments carried out on any animals that live in this planet. None! It’s really quite simple would you allow your innocent child to be put through what some of these poor animals go through? Enough said, we all share this planet together, so stop the brutality and sick experimentations now!!!

You are so right. I am with your statement all the way. People never have the right to torture animals for any reason. Our domestic animals and wild animals are not human and we have no right to test, torture or mutilate them for any “human” solution to disease. In fact some diseases and unhealthy conditions are probably caused by such torture.

Abusing animals is a serious crime, also in science.