We’ve been finding, exposing, and defunding wasteful government spending on animal experimentation for years. It’s what we do. It’s our “thing.”

But sometimes, we find something so egregious that it’s hard to fathom. It doesn’t happen often, but it happened recently, when we discovered that U.S. taxpayer dollars were funding monstrously cruel experiments on kittens in labs…in Russia.

Our exposé made the front page of the Washington Times — our second front-page story in six weeks.

We were shocked at this waste of money  — and when we shared our findings with our friends in Congress, they were, too. 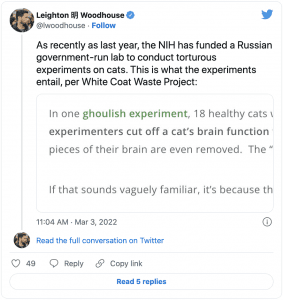 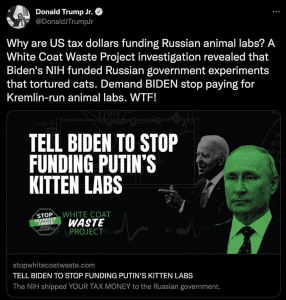 So did Chris Plante on WMAL:

And news outlets — local and national, left and right, small and large — all covered the story:

Congress is continuing to press President Biden to end these grants:

Naturally, if the White House responds — or, better yet, stops funding Putin’s experiments — we will let you know right away.

But until that happens, money that should be in your bank account is slowly making its way to Moscow — and people, pundits, and policymakers are all talking about it.