Wasteful. Cruel. Unnecessary. Hidden from public view. In the case of the St. Louis Dept. Of Veterans Affairs (VA), one of only two VA facilities still experimenting on dogs, their experiments can be categorized as “all of the above.” 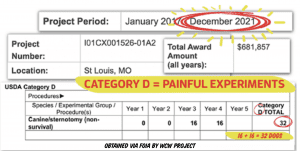 But thanks to White Coat Waste Project’s (WCW) campaign — which generated widespread public opposition to animal experiments — the horrific puppy experiments at the St. Louis Dept. Of Veteran Affairs are finished!

Late in 2019, WCW filed a major transparency lawsuit against the St. Louis VA. We had to do it, because the white coats in charge of the lab REALLY didn’t want taxpayers to know how their money was being wasted.

As we detailed, government bureaucrats openly discussed how they could break federal law, and hide important information about ongoing puppy abuse at the St. Louis VA. 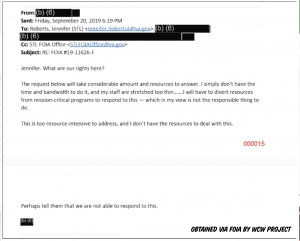 After a lengthy legal process, we won! The St. Louis VA was finally forced to turn over their records. We could see why they tried so hard to keep them hidden from public view. The details were horrifying: after being starved overnight, 32 six-month-old puppies would have inflammatory agents injected into their veins. The puppies’ hearts were then cut out, leaving the poor dogs to die from “exsanguination” — more commonly known as bleeding to death.

You paid well over half a million dollars for those experiments, which were slated to last until 2021…and if they were renewed, they’d go on even longer than that.

When we exposed these ghoulish and grotesque experiments, Congress was outraged. Combat veteran (and Waste Warrior!) Rep. Brian Mast (R-FL) had this to say:

I’ve been working closely with the White Coat Waste Project to expose painful experiments on animals being conducted by the federal government. We have made great progress to make these practices illegal, but we must do more to end them once and for all!https://t.co/SM7rmhviGt

Congress was right to be mad. In 2019, following WCW’s campaign, the Office of the Inspector General at the Department of Veterans Affairs launched an investigation into dog experiments at the VA.

In a scathing report, the IG found that the VA’s ongoing dog experiments “undermine[d] congressional intent and [were] unresponsive to the public’s concerns.”

In other words, by continuing to perform unnecessary and wasteful experiments on puppies, the St. Louis VA was breaking the law.

With the VA set to phase out experiments on dogs, cats, and primates by 2025, many VA facilities across America have been ending their cruel animal experiments. By the end of 2021, only two facilities doing experiments on dogs were left: the St. Louis VA and the Richmond VA…which brings us back to the beginning of this blog.

WCW has just received confirmation that the St. Louis VA has ended its ‘puppy heart removal’ experiments once and for all. Their funding ended at the end of 2021, and they have NOT been renewed.

Ending dog experiments at the VA by 2025 is a wonderful goal. You know what’s even better? Ending them even sooner than that.

We’re getting there — thanks to your help.

Take the next step! Tell Congress to urge Dr. Fauci to follow the VA’s lead, and end his dog experiments!

End the VAs cruel and barbaric animal experiments. I do not want my tax payer money funding animal tortures

Cruelty to animals is barbaric especially when tests are the cause

YAY!!!! CONGRATULATIONS TO YOU GUYS!!!! I’m so proud of you and THANK YOU for making this a ‘thing of the past’. I really don’t care WHO’s doing these things to animals, it JUST NEEDS TO STOP NOW!!! Federal agencies or government or private —- IT NEEDS TO STOP! Thank you – keep up the good work.

YOU HEARTLESS BLOOD GUILTY SCUM OF THE EARTH FAUCI HOW DARE YOU SUBJECT INNOCENT ANIMALS TO YOUR BARBARIC USELESS EXPERIMENTS YOU ARE ONE SICK HEARTLESS SCUMBAG IM LOOKING FORWARD TO THE DAY WHEN YOU GET YOURS YOU DONT MESS WITH JEHOVAH GODS INNOCENT CREATIONS LIKE THIS ANIMALS ARE HERE FOR OUR ENJOYMENT NOT TO BE USED ABUSED TORTURED EXPERIMENTED ON SHAME ON YOU YOU BLOOD GUILTY HEARTLESS IDIOT IT SAYS IN PROVERBS 6:16,17 THAT JEHOVAH GOD HATES HANDS THAT SHED INNOCENT BLOOD AND VENGEANCE IS MINE SAYS JEHOVAH I WILL REPAY YOUR DAY IS COMING YOU HEARTLESS BLOOD GUILTY SCUMBAG YOUR A DISGRACE TO THE ITALIAN AND HUMAN RACE AND ALSO IT IS A MORE THAN KNOWN FACT ANIMAL EXPERIMENTS DONT AND NEVER WORK EVERY ANIMAL LOVER IS FED UP WITH YOU AND YOUR HEARTLESS GARBAGE YOU HEARTLESS IDIOT LETS EXPERIMENT ON YOU YOUR FAMILY FRIENDS AND CRONIES YOUR A REAL PIECE OF CRAP TO DO THIS AND PICK ON OUR CREATORS PRECIOUS CREATIONS YOUR DAY WILL COME YOUR DAYS ARE NUMBERED IM LOOKING FORWARD TO WHEN JEHOVAH SAYS ENOUGH AND ENOUGH IS WAY PAST ENOUGH YOU SICK PIECE OF WORK

Animals do not consent to anything, nor are born to be tortured, therefore must be protected at all times.

Animal experiments all need to be stopped now.

The injustice of the innocent & voiceless’

Congratulations to the White Coat Waste Organization for their tireless investigations and successes in permanently stopping these atrocities inflicted on animals. When I think about this horrific animal abuse and wasteful exploitation of tax dollars, it makes me furious. This wasteful use of tax dollars allowed by our government makes me furious. I used to completely support and respect our government and now I don’t. This wasteful and abusive waste of hard working Americans is an outrage. Inflicting such cruelty in animals destroys my confidence in our government. This exploitation has been and will continue to be scrutinized and permanently stopped.

Stop the murder and torture of animals.! Animals are not ours to exploit, murder torture, eat, abuse or murder! Stop the governments goulish experiments now. Hold the abusers accountable by fining, and jail time. Also abusers should be banned from ever being close to another animal! Evil walks among us everyday!

No more taxpayer funded animal experiments – the drug companies and NIH along with Fauci are behind this cruel practice.

this is unbearable. Thank you for taking action but can’t help but think of all the victims that suffered till the end.

Clearly we can do better. Animal testing is cruel and yields meaningless results. Let’s figure out a kinder way!

so happy this has ended – it is horrific

Thank you White Coat Waste for helping to end animal testing No animals deserve to be tested on those tests are useless, so is Fauci!!!! All he is a horrible animal abuser that uses our tax dollars to fund these sick tests!!!! The tests should be ended now, not by 2025!!!!!?!

As a former U.S.Marine and Vietnam Veteran I can think of a few experiments I’d like to introduce to that LITTLE SCUMBAG and after November real American PATRIOTS will be closer than ever

Stop the unreasonable killing of dogs.

Thank you, WCW!! I’m so happy to see my donations working because of your hard work. The cruelty has to stop!!

I just get so angry that our government gives them this money and allows this to go on for tests that have nothing to do with anything. These people should be put on trial because all they were doing is having fun which these people need to be in prison for murder. Yet agencies that are trying to stop something that never should have been started are begging for money to support their efforts! What the hell!!!!