At the core of White Coat Waste Project (WCW) is a belief: taxpayers deserve to know how our money is being spent.

Our strategy to shut down government labs has always been F.E.D.. Using the Freedom of Information Act, we FIND wasteful and cruel taxpayer-funded animal experiments. Then we EXPOSE them to the press and to the public — because taxpayers have a right to know how their money is being spent. Finally, we work hand-in-hand with elected officials to DEFUND the waste.

But it has to go in that specific order — we can’t defund white coats if we can’t expose them. That’s why the First Amendment is paramount: it’s what allows WCW to save animals from wasteful government labs.

But what happens when government white coats don’t want to let us share how your tax money is being wasted?

We take them to court.

But before we all start celebrating, let us fill in some quick background for you.

Back in 2017, we tried to run this advertisement on city-owned buses in Richmond, VA to expose a notorious Department of Veterans Affairs puppy experimentation lab that, among other things, injected latex into puppies’ arteries to induce heart attacks:

Here’s the original ad WCW tried to run that got censored.

The Greater Richmond Transit Company (GRTC) — the City of Richmond’s public transportation system — refused to run the ads, claiming they violated the agency’s ban on so-called ‘political’ speech. To us, this appeared to be an unlawful attempt to protect Richmond’s white coats from public scrutiny over taxpayer-funded puppy abuse.

So we sued, claiming that the ban was arbitrary and a violation of our First Amendment rights. At the time, Matthew Strugar, a civil liberties attorney representing WCW Project in this case (and many others), told the Richmond Times-Dispatch “The policy against so-called political ads allows the government to pick and choose what views people can express.”

Now, after a l-o-o-o-o-o-n-g time litigating (and a WCW win and subsequent appeal), we finally got good news: the U.S. Court of Appeals for the Fourth Circuit found that GRTC’s ad policy blocking WCW’s ads was unconstitutional. The court’s opinion stated: “When taken together, Richmond Transit’s vaguely defined policies and even vaguer unwritten rules make it impossible for a reasonable person to identify what violates their advertising policy and what does not.” 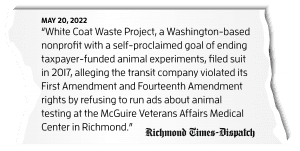 Officials with Richmond’s local bus system will continue evaluating how to restart its advertising program after a federal appeals court last week affirmed that its decades-old ban against political ads is unconstitutional. https://t.co/ntCSfR5JWe

You love to see it!

We’re proud of this major victory for taxpayers, animals, and for free speech.

We’re also proud of all of the progress we’ve made since 2017 to shut down the VA’s dog testing in Richmond and elsewhere!

“Democracy Dies in the Dark”

it took 5 years and the judgment was confined to only richmond times. we need a much broader judgment that makes all communication that exposes these secret closed govt contract meetings of cdc nih open to the us pblic. we are being robbed of our money for these attacks on animals that are unnecessary,w asteful and robbing us blind

After WCW Push, Congress Tells FDA and USDA to #GiveThemBack
For years, White Coat Waste Project (WCW) has been pushing federal departments and agencies to retire animals when their experiments conclude. (After all, taxpayers paid for the animals, so Uncle...
1 LikesLeave a comment