When we recently started seeing media headlines like “Gene-editing experiment turns cute hamsters into ‘aggressive’ beasts,” we knew that only taxpayer-funded white coats and government bureaucrats would conceive of (and bankroll) such wacky waste and animal abuse.

Sure enough, we were right — and we have the receipts. And now, thanks to a new White Coat Waste Project (WCW) investigation, we have the videos too:

Our review of government spending databases found that white coats at Georgia State University (GSU) received over $1.5 million of your money, via the National Institutes of Health (NIH) and the National Science Foundation (NSF). How did they spend your money? Maximum-pain experiments. First, they genetically engineered hamsters, then they drilled into their skulls, and finally, they pitted the hamsters against one another in staged, scored fights. 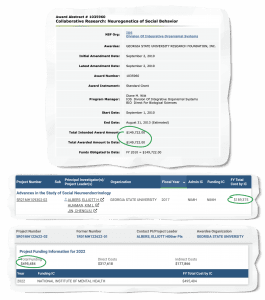 Hard to believe, right? Well, thanks to WCW, you can see for yourself. Because when we requested more details via the Georgia Open Records Act, we obtained these troubling videos of GSU’s hamster fight club:

In the taxpayer-funded experiments, Syrian hamsters were genetically modified and bred to have a nonfunctional gene that controls, among other things, aggression. These ‘knockout’ hamsters (pun intended?) were placed alongside non-genetically modified hamsters, and their behavior was studied.

The experimenters expected the genetically-modified hamsters to be bullied, but they turned out to be the bullies instead. (As usual, the white coats were wrong). The engineered hamsters exhibited more aggressive behavior than their peers. They were “scored for aggressive behavior” by placing them in an “arena” with other hamsters and measuring how much time they spent “chasing, biting, and pinning” them. The engineered hamsters marked their territory more frequently, too. 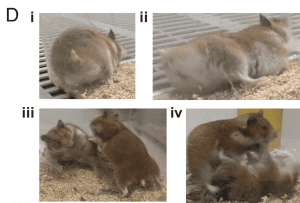 Photos of hamsters fighting from the taxpayer-funded, published study.

The experimenters also drilled holes in the hamsters’ skulls, screwed devices into their heads and implanted tubes in their brains.

Was this worth two grants from the NIH (here and here) and one grant from the NSF? We don’t think so.

Whether genetically-modified or not, there were no winners in the hamster fight club: 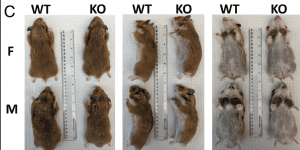 Hamsters were anesthetized for this photo, published in the Proceedings of the National Academy of Sciences — but that doesn’t mean that the white coats let them survive.

Federal reports submitted by GSU show that these experiments were classified in Pain Category E — meaning they were painful, and pain relief was deliberately withheld from the suffering animals. 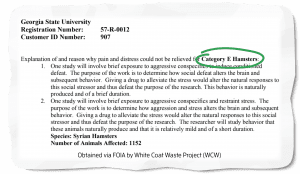 Upon the conclusion of the experiments, all the hamsters were killed.

Unfortunately for taxpayers (once again), you wouldn’t know that your tax dollars paid for these experiments. GSU’s press release about the ‘hamster fight club’ experiments makes no mention whatsoever of taxpayer funding, meaning the press release violates longstanding federal transparency law known as the Stevens Amendment. Sadly, as we have detailed many times, most recently in our ‘Up In Smoke’ report, Stevens Amendment violations by rogue labs are incredibly widespread. Although the federal government is aware of the problem, reform has been very slow.

‘Hamster fight club’ is not an unusual experiment for taxpayer-funded white coats. In fact, this was far from the first animal ‘fight club’ paid for with your tax dollars.

In 2016, we exposed that Harvard experimenters received $890,663 from NIH to breed aggressive mice and force them to fight one another in scored matches. (They even called their experiment “Fight Club” — no subtlety here!)

Congress has also uncovered that the National Science Foundation (NSF) ‘shelled’ out over $700,000 to Duke University in 2015 so white coats could study the “punching power” of shrimp. Experimenters pitted Mantis shrimp against one another in videotaped fights, concluding that “it wasn’t the shrimp who hit hardest who won the bout, but the one who hit the most frequently.”

#EXCLUSIVE: A study that purported to find the gene behind aggression in hamsters is now under fire for unnecessary cruelty, according to a watchdog organization.

Taxpayer-funded animal fight clubs have you seeing red? The solution is the COST Act — bicameral, WCW-backed legislation to make rogue labs like the Hamster Fight Club disclose how much they’re spending, or risk having their cash withheld. Contact Congress, and tell them to pass the COST Act today!

NIH as usual. Fauci sucks! Get these bastards! Go after Stevens violation, too. Run it up the flagpole. Taxpayers deserve to know 1.5 million of their hard earned dollars are funding hamster abuse. GSU needs to be publicly embarrassed, too! Hurt their alumni donations!

I read about this on Twitter. All I read is that they “accidently” (If I remember the tweet right – and I can’t seem to get on to check.) made them more aggressive. I didn’t know about the rest, but I can’t say I’m surprised. Thanks for bringing this to light!

I am trying not to lose all hope in the goodness of mankind. You are my heroes, & May God continue to bless you & all your endeavors to stopping the white coats from harming one more innocent animal. I donate to this most important cause when I can & with as much as I can. Keep the good fight going & don’t stop until every last precious is animal is freed .

These people are spreading the message of violence. Stop this madness!

How low can you go, apparently lower than low, how about we put you in a ring and make you fight against your will for your life.

All animal cruelty makes me sick. Why do so many feel the need to experiment with the
lives of these little animals. Stop animal cruelty. Millions are paid each year and I think
this is wrong. Animals were put on the earth for the enjoyment of people. Stop this violence. Close down all animal torture labs. Too many lives lost, too many millions paid.

I don’t understand WTF is going though the minds of these sickos that come up with cruel & pointless experiments on animals. What’s even worse is the federal government funding these unimaginable tests. Our country should be using all that money on saving animals from cruelty, not intentionally & legally abusing them. How do they justify such STUPIDITY? Why don’t the same laws apply to them as they would for citizens that aren’t involved in governmental testing? The government needs their heads examined if they think these inhumane experiments are entertaining
to watch.

I hesitate to send $$$ via the internet, old school. I shall continue to send checks via regular mail. I did type up, & distribute 6 little snippets of a brief paragraph about your work, & distributed them at the dog park. Your work is wonderful. Our strength is in numbers. The more I learn the more I appreciate the work you do.

As a co-op high school student from 1975-78, I worked as a holographer, the company sharing space with a gov’t lab called Randomline. We were intermingled. The experiments sound the same except using pure white rats. The rats fought to the death close to my desk. Then their brains were frozen and sliced thin enough for slides. I cried every night.

Hamsters? Everytime I think I have heard of every animal cruelty thing in the world something else to be cruel. They need to use that money for climate change. Makes me sick to my stomach. We should only be helping animals not using them for their sick jollies. So many starving and sick animals that need our help That is why I prefer dogs to humans anytime. I will always be social distancing when it comes to humans. Most have been useless to me. Please Humans Help Only No Harm to any living thing or climate either. Very upsetting. No use for these horrible people!

Cruelty to animals is the first sign of human depravity. It doesn’t stop there.

Cruelty to animals is the first sign of human depravity. It never stops there!

After WCW Push, Congress Tells FDA and USDA to #GiveThemBack
For years, White Coat Waste Project (WCW) has been pushing federal departments and agencies to retire animals when their experiments conclude. (After all, taxpayers paid for the animals, so Uncle...
1 LikesLeave a comment