Since 2019, White Coat Waste Project (WCW) has been leading the fight to defund the barbaric and wasteful practice known as “live tissue training” (LTT) — stabbing, shooting, burning, and dismembering pigs and goats as part of law enforcement officers’ medical training at the Department of Justice (DOJ).

Records we obtained through a successful lawsuit against the DOJ detailed how the agency  wasted over $130,000 of your money to hire white coats to inflict “traumatic injuries” in “live animal models.” Based on WCW’s investigations, Congress has repeatedly pressed the DOJ to end this waste and abuse and adopt human simulators that are more effective and cost-efficient.

U.S. Government Live Tissue Training. You paid for this.

Now, thanks to WCW advocacy and lobbying, calls and emails from our grassroots supporters, and the tireless work of Congressional champions like Congresswoman (and WCW Waste Warrior) Madeleine Dean (D-PA), we’re closer than ever to defunding and ending LTT at the DOJ.

Following a request from Rep. Dean (Vice-Chair of the House Judiciary Committee, which has oversight over DOJ) and 31 bipartisan colleagues, the House Appropriations panel that funds the DOJ has included language in the agency’s 2023 spending bill that prohibits the use of taxpayer money for LTT — because it’s wasteful, and because a majority of Americans, regardless of political party, oppose it. (Read the full request letter at the end of this blog!) 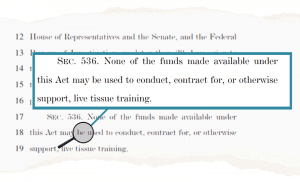 While the bill still has to be passed by the full House and Senate, we are optimistic that this will be the year that DOJ live tissue training is defunded once and for all.