Ever since White Coat Waste Project (WCW) first exposed that dangerous coronavirus experiments on animals at the Wuhan Institute of Virology (WIV) were funded by U.S. taxpayers, the idea that the coronavirus accidentally leaked from the lab and caused the COVID pandemic has gained international traction. Even the World Health Organization (WHO) — which once dismissed the theory — now says that the lab leak hypothesis deserves “further investigation.”

Congress recognizes the threat posed by funding risky animal experiments at the notorious Wuhan lab, too. On Wednesday, June 22, the powerful House Appropriations Committee, which sets the budget for federal agencies, approved a White Coat Waste Project-endorsed amendment from Rep. Guy Reschenthaler (R-PA), banning any Department of Defense (DOD) funds from being spent at the Wuhan Institute of Virology. The DOD, along with the National Institutes of Health (NIH) and State Department, funded dangerous animal experiments at the Wuhan lab. 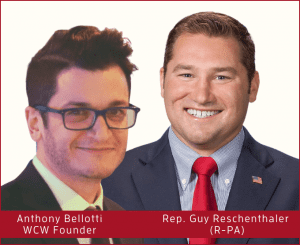 The committee also approved a second WCW-backed amendment from Rep. Reschenthaler, barring the DOD, for the second year in a row, from funding any work in China performed by the white coats at shady nonprofit EcoHealth Alliance, which funneled tax dollars to the Wuhan lab. A majority of Americans, as well as the FBI and other experts, believe their gain-of-function experiments on animals could have caused the pandemic.

Because EcoHealth Alliance has had contracts with many different federal departments and agencies, Rep. Reschenthaler also offered an amendment to prevent the Department of State from funding EcoHealth Alliance, which was approved by the Appropriations Committee. It seems that Congress is rapidly becoming aware of the very real dangers posed by EHA’s risky animal experiments!

Rep. Reschenthaler, a Waste Warrior, has been a long-time ally of WCW, recently penning a joint op-ed in Newsweek with our founder and president Anthony Bellotti about our work together to investigate the lab leak hypothesis and hold government bureaucrats accountable.

The bill will soon head to the House for a vote, then the Senate. As it progresses, we will keep you posted; in the meantime, thank you to Rep. Reschenthaler, and other members of the Appropriations Committee, for protecting taxpayers, animals and public health!

House appropriators adopt an amendment by @GReschenthaler to bar State and Foreign Ops funds from going to EcoHealth Alliance for work in China. The nonprofit did work with Wuhan Institute of Virology under an NIH grant. Reschenthaler also added this text to the Defense bill.