FOIA to Freedom: How WCW Saved the Stokes Sisters

The CDC issued its “15 Days to Slow the Spread” order. The COVID lockdowns began.

And the “STOKES SISTERS” were born:

They’re called “blotched tabbies.” The name comes from the pretty swirl pattern on their fur.

The Stokes VA Medical Center (VA) in Cleveland purchased these kittens for experimentation. So, the ‘Stokes Sisters’ spent their lives in a government lab.

Well, MOST of their lives… 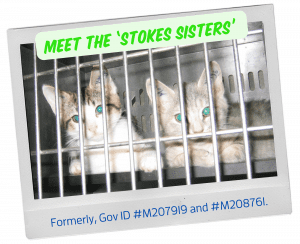 Here at the White Coat Waste Project (WCW), we have a proven strategy to follow the money, cut wasteful government spending, and end animal experiments.

THEN, we retire as many survivors as we can to the taxpayers who pay the bills.

It’s called FOIA to Freedom. Here’s how we did it for the Stokes Sisters.

WCW launched a Freedom of Information Act (FOIA) investigation to find out how white coats at the Stokes VA were wasting our tax money.

And what we found was terrible: a $3.4 million payout for experiments on kittens, some as young as six months old.

Photos, videos, and lab documents we obtained revealed painful and mutilating surgeries on kittens, with electrodes implanted to remotely stimulate their bladders or colons.

Other kittens had artificial stool made from “bran, potato flour and saline” inserted into their anuses. 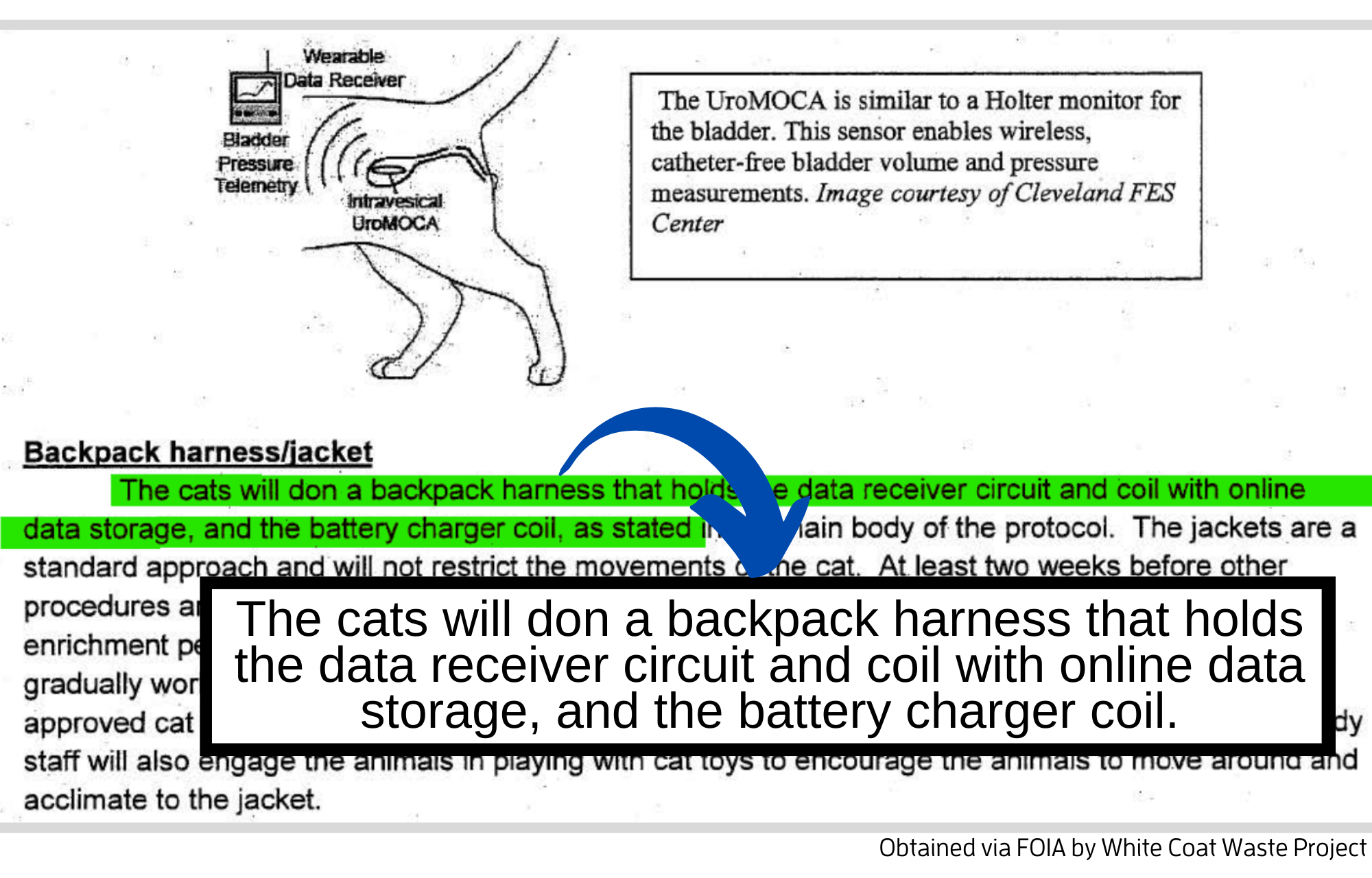 Some of their spinal cords were severed while they were still alive.

Some had already been killed and dissected, like Odie:

Here’s an actual video of Copper, filmed just before Stokes white coats killed him on October 21, 2019

Once the checks cleared the bank and the experiments finished, the Stokes protocol explicitly called for all kitten survivors to be destroyed.

The odds were against us.

We campaigned hard to beat the clock and free the imprisoned Stokes Sisters before it was too late.

Bottom line: the Stokes Sisters were P.O.W.s — prisoners of WASTE!

To free these federal hostages, we took a page from our own playbook: F.E.D.

Step 1: Find Gov’t Waste. You’ve seen why FOIA is so important. Nobody knew what was happening at Stokes. 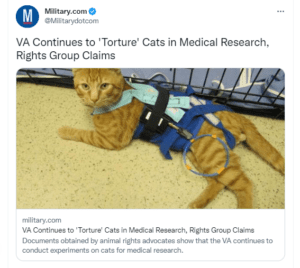 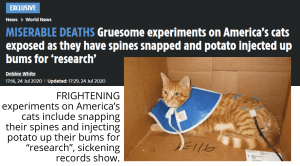 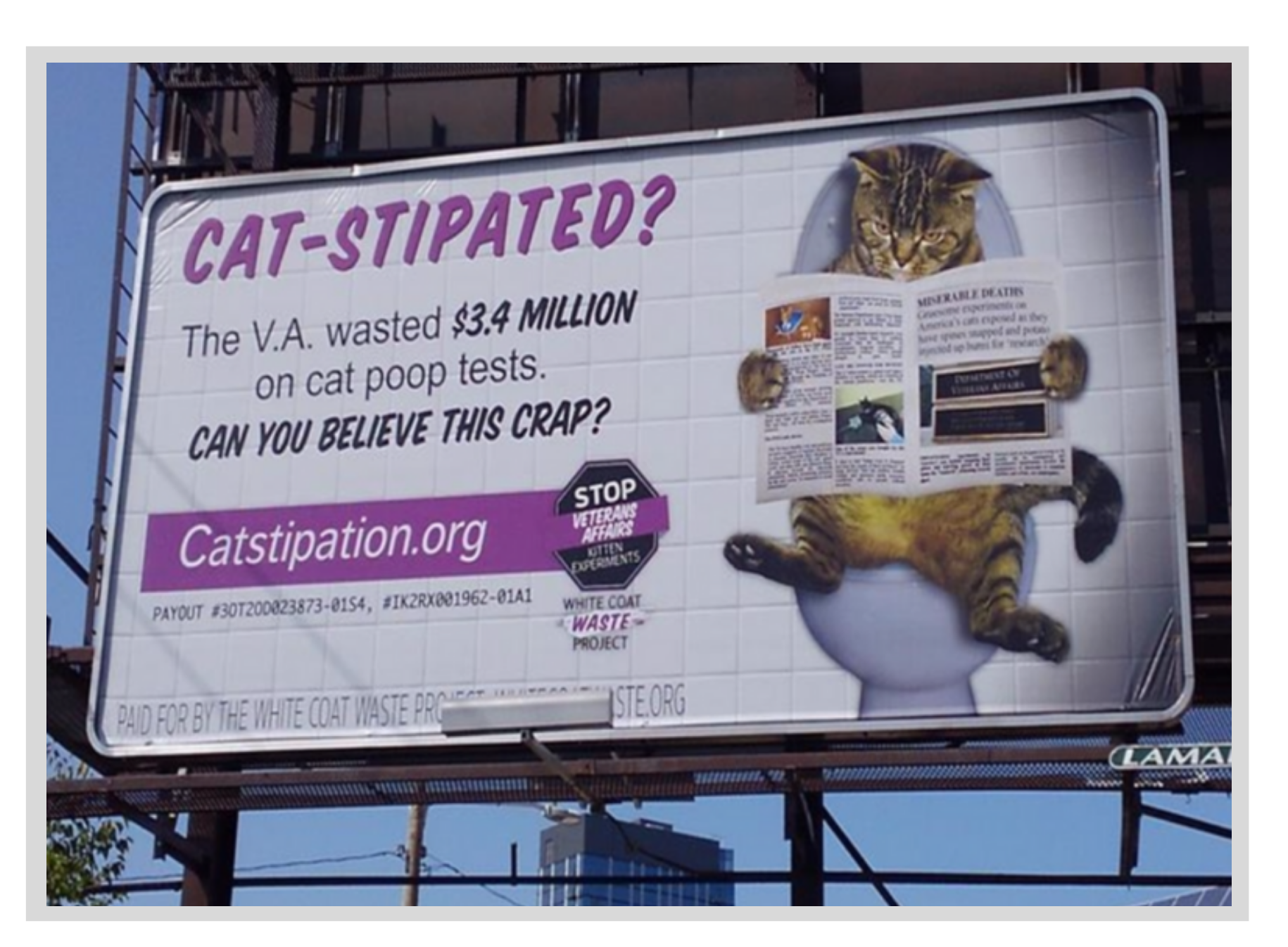 We got celebrities, too: 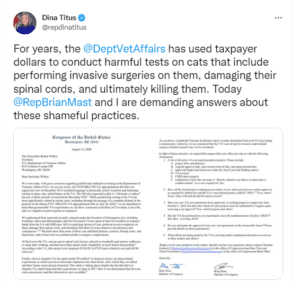 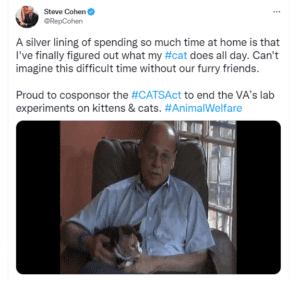 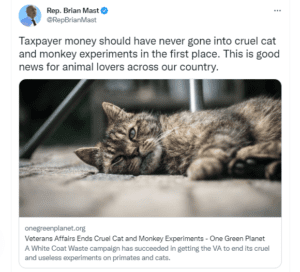 FROM LAB CATS TO LAP CATS

Taxpayers bought the Stokes Sisters. We demanded the government #GiveThemBack! 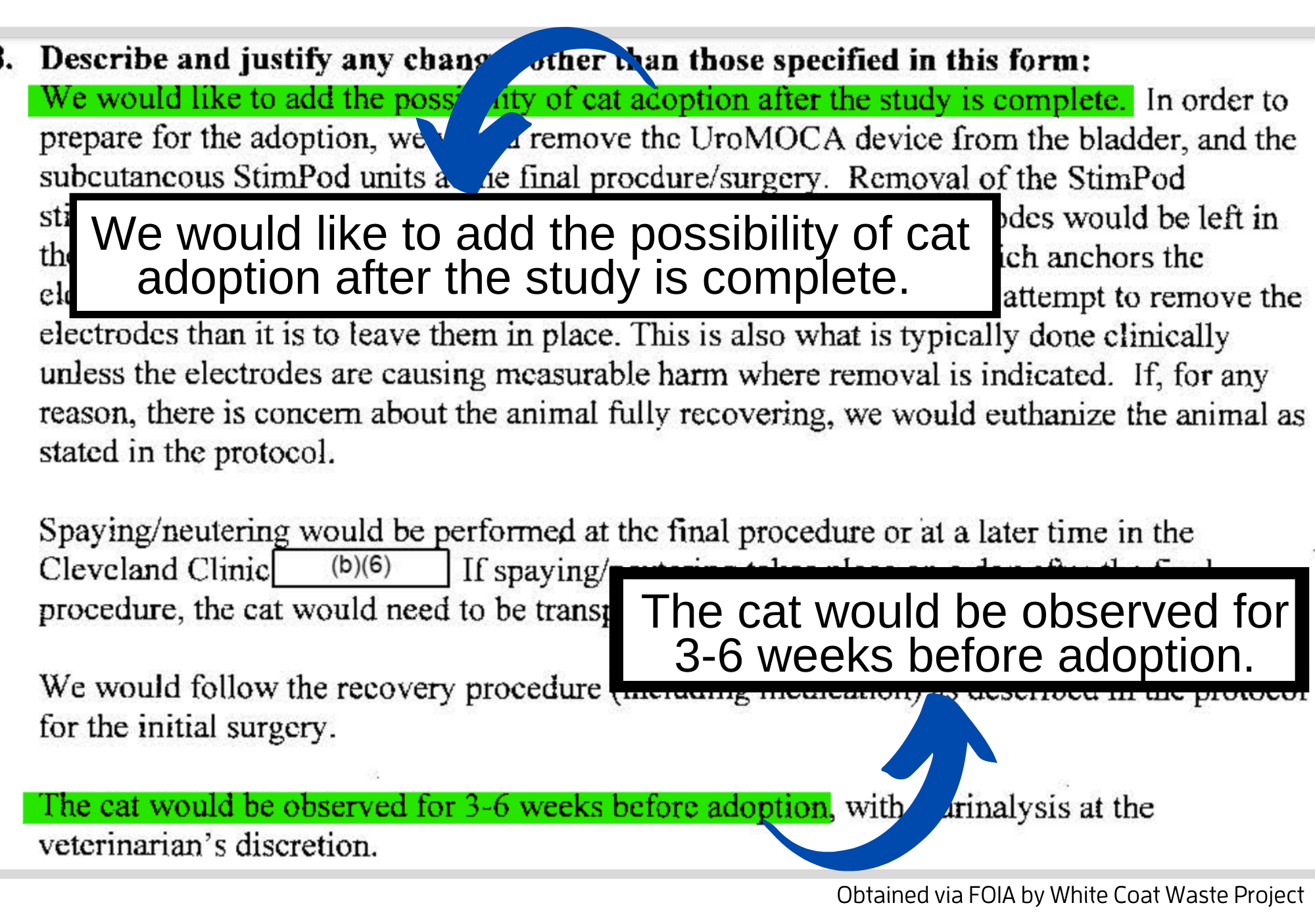 WCW made the VA change policy to permit taxpayer adoption of the Stokes Sisters. 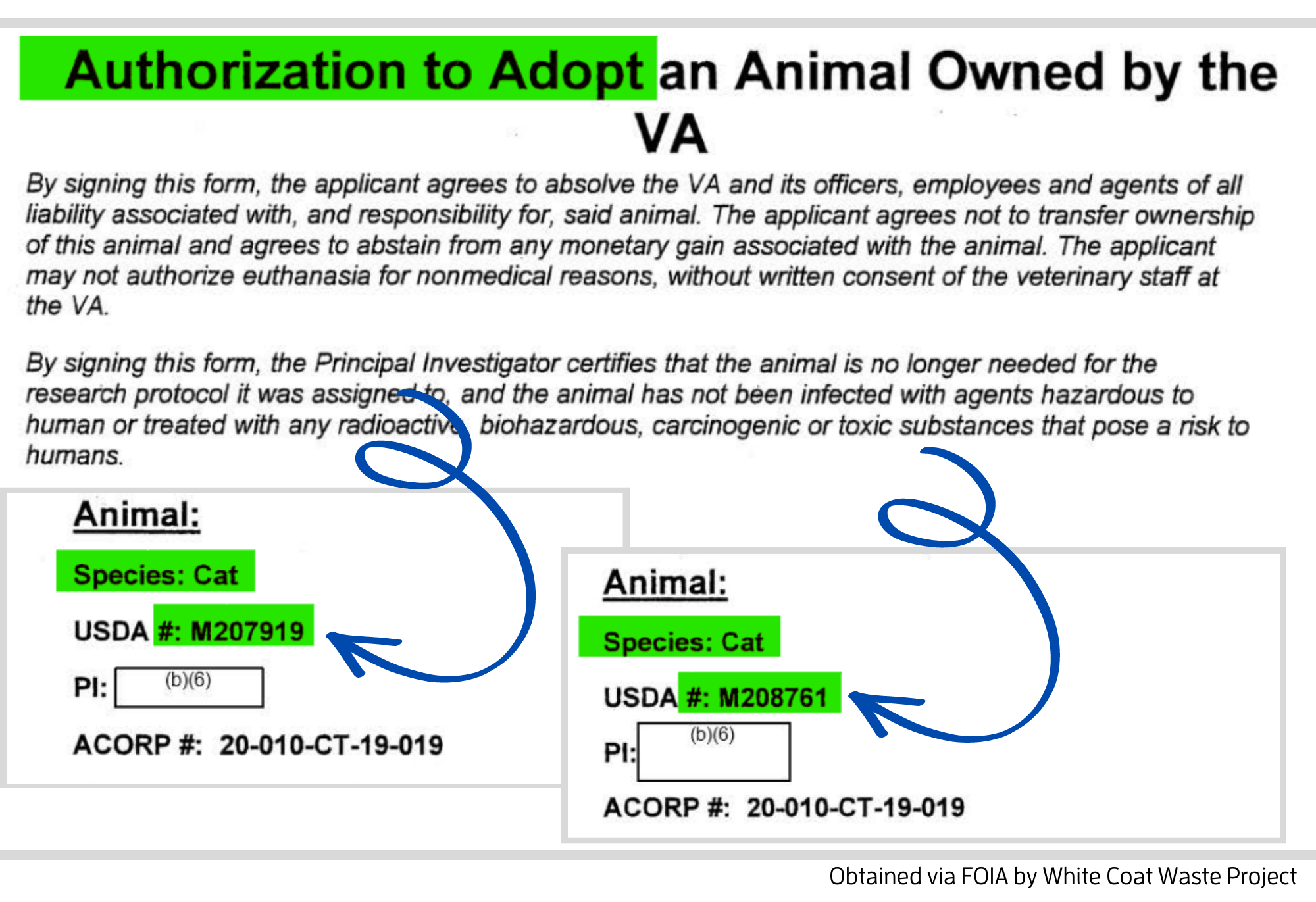 WHY IT MATTERS
Every ‘FOIA to Freedom’ story is a tremendous victory — and tremendously rare.

Labs rarely shut down. Survivors rarely get out.

So, when we discover individual animals via FOIA, close their labs, and ALSO succeed at getting survivors retired…it’s a very BIG deal.

Yet we’ve done it time and time again. WCW has:

And now the Stokes Sisters.

Every FOIA to Freedom story shows why Violet’s Law is so important.

WCW’s bipartisan, bicameral legislation — named after the most famous of all lab survivors — will make retirement a requirement across the entire federal government.

Please tell Congress to pass Violet’s Law (A.K.A., the AFTER Act) NOW!

Please pass the violets Law so that all these innocent cats monkeys, and dogs will have a second chance at life. They should be adopted to good home with loving families. No animal
should be used for experiments. There is modern medicine and the government should not allow any animal to be tested on period!!!!
STOP wasting Tax payers for unwanted wasteful experiments…. They are precious babies that need to be loved…. Like we do as human beings.

all these horrendous and useless animal tests have to be stopped FOREVER!

Thank you for freeing animals stuck in cruel lab experiments. End animal testing it is barbaric. I don’t want my tax payer money supporting this.

Let’s stop unnecessary spending on tests that can be, much of the time, computer generated with no need for live victims of a study. At the very least, let’s give these animal victims a chance at a happy life or retirement.

It is time to utilize non-animal models for research purposes.

Please save God’s animals. God created cats, dogs and other animals for pets to give us unconditional love. No God’s animals deserve to be locked up in a lab and torturing them for medical reasons or junk science. Please save these poor innocent animals, and give them a second chance at a new and improved life!!!

Stop using cats, dogs, monkeys, bunnies, mice, or rats in lab experiments. Use computer models instead. Pass Violets law for those animal survivors in labs. Close the labs where animals are used in experiments.

God didn’t create animals so humans could use them for experiments or toeutue. He made them for us to love and cherish and to take care of them. Humans are suppose to use their brain to figure what works. Not torture God’s gift to us.