“They started that #BeagleGate and well, we got some good news: we cancelled Dr. Fauci’s taxpayer funded dog tests.” –@jimmy_dore

The victory was a team effort! From our initial exposé, to criticism from Rep. Nancy Mace (R-SC), to Senator Joni Ernst’s (R-IA) pointed letter to Dr. Fauci, to Fauci’s cancelation of his white coats’ experiments, the dedicated efforts of our supporters helped shut down this boon-doggie before it even started.

WCW is proud to be the ONLY GROUP to close a government dog lab in 2022. In fact, we’ve already shut down two: this one, as well as the St. Louis VA’s “blood-draining” puppy experiments.

In the days following Dr. Fauci’s announcement that his experiments would NOT use dogs after all, Congress and the media have been buzzing with delight about the good news — and WCW’s accomplishments.

Here’s what Pulitzer Prize-winning journalist Glenn Greenwald had to say: 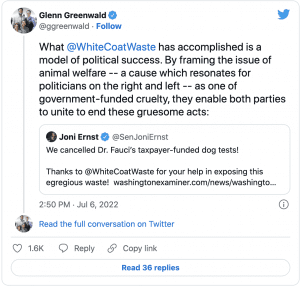 It seems that other journalists are waking up to the fact that more animal experiments are funded by Uncle Sam than any other entity: 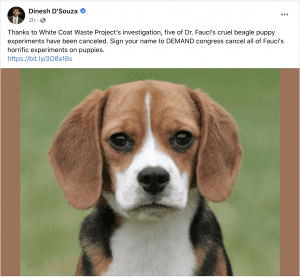 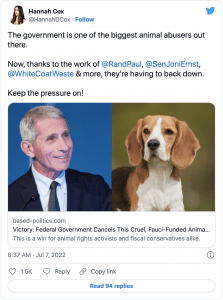 While others are pointing out the hypocrisy of the media for ‘covering’ for Fauci in the past. 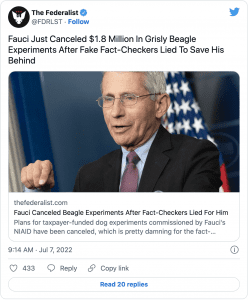 Members of Congress are happy to see that tax money isn’t being used to torture puppies. 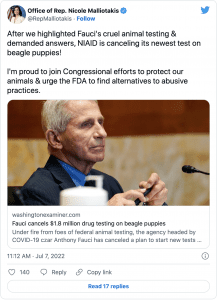 The press seems exuberant, too:

From newspapers to the internet, to TV, the coverage was widespread. Our SVP, Justin Goodman, spoke with Eric Bolling on Newsmax’s “The Balance” to discuss the news:

We’re thrilled, of course, and we’re also deeply grateful for your support. It’s been a good week, a good month, and a good year…and with you in our corner, we’re going to keep our momentum going strong, in 2022 and beyond!