“Gain of function” (GOF) studies are experiments in which viruses are intentionally engineered by reckless white coats to become more transmissible and more deadly. Experts at the FBI, lawmakers, scientists around the world, and most Americans believe that the Wuhan Animal Lab’s dangerous taxpayer-funded coronavirus GOF experiments — first exposed and defunded by White Coat Waste Project (WCW) — caused the COVID pandemic. 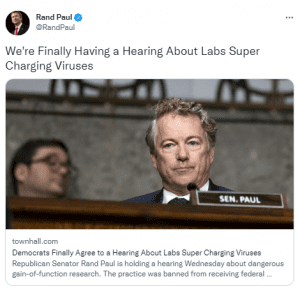 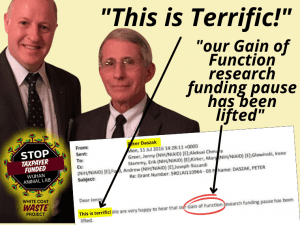 This Wednesday, August 3, a lot more people learned about the dangers of gain-of-function experiments and what we can do to stop it, thanks to the efforts of Senator (and Waste Warrior!) Rand Paul (R-KY). At Paul’s urging, the Senate Homeland Security and Government Affairs Committee’s spending oversight subcommittee—which is run by Sens. Paul and Maggie Hassan (D-NH)—held a hearing entitled “Revisiting Gain of Function Research: What the Pandemic Taught Us and Where Do We Go From Here.”

A majority of taxpayers oppose funding for GOF and want to see US-led investigations into COVID’s origins, and this is the first ever Senate hearing on GOF. Kudos to Senator Paul for getting it on the books! 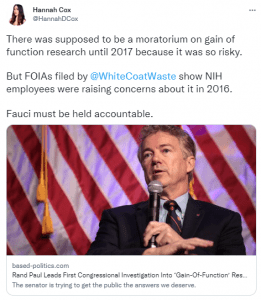 There were fireworks aplenty at the hearing, including these gems: 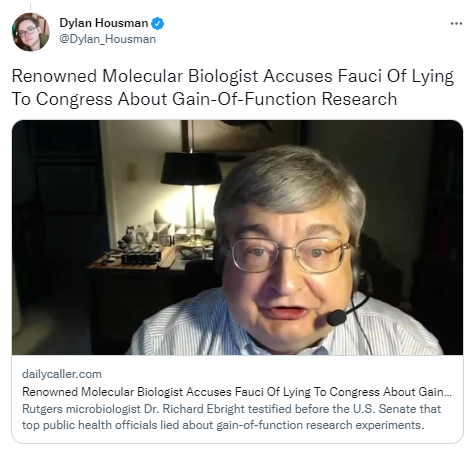 Could poor U.S. oversight of high risk gain-of-function research have caused the pandemic?

More notably, there was a lot of agreement on the dangers of GOF experimentation and that it needs to be banned, or severely curtailed — which is precisely why we wrote to the Biden administration in February of 2021, asking him to reinstate President Obama’s moratorium on these 🦇💩 crazy experiments. We’re also backing bipartisan legislation in the House and Senate to halt taxpayer funding for GOF experiments, which are opposed by a majority of Americans. 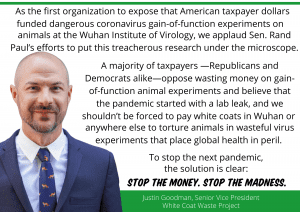 In the meantime, if you’re fed up that your tax money is funding dangerous animal experiments at labs all over the world, take action! Tell Congress to pass the AFAR Act today!

Seeing this hurts my heart. I love dogs so much! I am heart broken !

Please, please, please defund any and all labs that are performing cruel, painful, and barbaric experiments on animals. This must stop.