Originally published as a DailyCaller Op-ed.

A wise man once said: “when you’re in a hole, stop digging.”

Similarly, when the country is in a recession, with inflation continuing to soar … stop spending. While many proposed budget cuts may be controversial, one federal expenditure has attracted criticism from both sides of the aisle, from the Freedom Caucus to the Squad: taxpayer-funded experiments on dogs. It’s time to stop our government’s barbarity and waste once and for all. Defunding dog abuse will save puppies’ lives, protect taxpayer dollars, and improve public health, and the Protecting Dogs Subjected to Experiments Act will do just that. 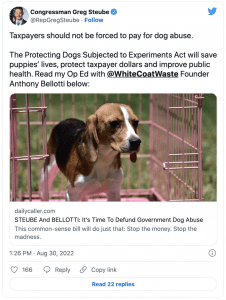 Nearly half of the National Institutes of Health’s (NIH) $40 billion budget is wasted on inefficient government animal experiments, many of which involve cruel, expensive and unnecessary testing on dogs.  Heartbreakingly, the dog of choice for NIH-funded experimenters is the beagle, because their “convenient size and docile nature,” according to a government website, makes them easy to abuse. 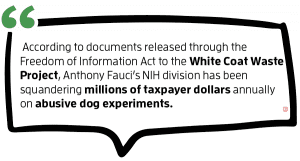 According to documents released through the Freedom of Information Act to the White Coat Waste Project, Anthony Fauci’s NIH division has been squandering millions of taxpayer dollars annually on abusive dog experiments. Some of the Fauci-funded projects exposed as part of #BeagleGate entail covering beagles with hundreds of hungry biting flies and infectious ticks, cutting puppies’ vocal cords cut out so they can’t bark in the lab, and making dogs inhale and ingest massive doses of experimental drugs. 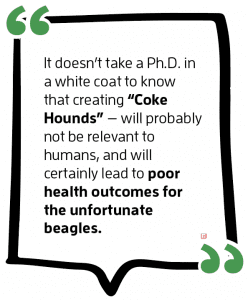 Another NIH division, the National Institute on Drug Abuse, wasted over $2 million of taxpayers’ money to inject puppies with cocaine to test a new anti-drug-abuse treatment, even though the Food and Drug Administration states that dog testing is unnecessary, according to White Coat. It doesn’t take a Ph.D. in a white coat to know that creating “Coke Hounds” will probably not be relevant to humans, and will certainly lead to poor health outcomes for the unfortunate beagles.

Or consider the NIH’s long-running in-house “septic shock” tests. In these gruesome experiments, also paid for with your tax dollars, puppies’ throats are cut open, then infectious bacteria are implanted directly into the dogs’ lungs, causing them to develop pneumonia, White Coat documents show. Experimenters then bleed out the dogs, give them transfusions, and wait to see how long the dogs who survive surgery live.

Any dog that survives longer than 96 hours is then killed. Internal NIH records show that for years NIH white coats purchased beagles for these experiments from the notorious breeder Envigo, which was recently shut down by federal authorities for widescale abuses and violations of law.

Fortunately, Congress has found common cause and common ground on efforts to end wasteful government spending on dogs at the NIH and other federal bureaucracies. Both parties in Congress have probed the NIH about its questionable spending on dog testing.

Language in federal spending bills defunding painful dog testing at Department of Veterans Affairs facilities has passed for five years running, under Republican and Democrat-controlled Congresses alike. The amount of VA dog testing has dropped by over 87.5% as a result, and the VA has stated to Congress that “VA is completely aligned with Congressional calls to reduce the use of sensitive species (canine, feline, non-human primate).”

Taxpayers across the political spectrum want to see the same thing happen at the NIH too, with a July 2022 poll of 1,000 adults finding that 73% of taxpayers across all parties support congressional efforts to cut NIH dog experiments.

Taxpayers should not be forced to pay for dog abuse. We are working together to pass the Protecting Dogs Subjected to Experiments Act, which would zero out the NIH’s budget for dog experiments. It’s time to break this vicious cycle of fiscal irresponsibility and animal cruelty. Taxpayers will benefit, and thousands of puppies will be spared from death every year. 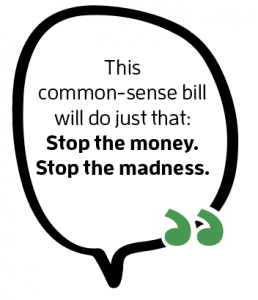 This commonsense bill will do just that: Stop the money. Stop the madness.

The views and opinions expressed in this commentary are those of the author and do not reflect the official position of the Daily Caller News Foundation.

This is so inhumane. Needs to stop

Money spent on this sort of activity seems at best unwarranted, and at the least nothing but an attempt to rationalize their cash stream. Yes, some times there may be appropriate use for specific and well monitored use of live participation. But sadly it is the “well monitored” aspect that is dropped. This forces the public to has less confidence in the outcome. It appears that human subjects are the best and most articulate lab responders.

it is wrong and needs to stop plenty of people in prison to do stuff to .

The abuse to Animals (dogs) in this case should be defunded and stopped. It is against all that we were raised to believe that Animals have souls and should be treated with love, kindness and respect. This is morally and ethically UNACCEPTABLE. STOP ALL ANIMAL ABUSE IN EXPERIMENTS AND QUITE WASTING OUR TAX DOLLARS.

it is wrong and needs to stop!!!

NIH Russia Cat Lab Progress
Coffee…nicotine…sugar…whatever it may be, an addiction is hard to break. And no addiction is harder for the National Institutes of Health (NIH) to break than their addiction to wasteful spending...
1 LikesLeave a comment 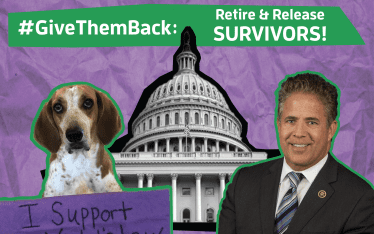