Originally published as an Op-Ed with The Daily Caller.

“Government waste” is a popular term used to describe a multitude of government missteps. It’s now widely believed that the U.S. National Institutes of Health’s (NIH) reckless spending at a Wuhan lab likely caused the COVID pandemic that has killed more than 6 million people and crippled the U.S. economy. Despite the many grave concerns about NIH spending overseas, dozens of suspect animal labs in China—and Russia—are still eligible to receive U.S. taxpayer dollars. Thankfully, Congress is beginning to recognize the dangers of untrammeled-spending by NIH bureaucrats in white lab coats and is taking concrete steps to restore some long-overdue fiscal sanity.

Last month, Senator Rand Paul (R-KY) and the Senate Homeland Security Committee held their first hearing on gain-of-function research. The matter on hand was NIH funding of dangerous animal experiments at the Chinese Communist Party-run Wuhan Institute of Virology (WIV).  The research was meant to supercharge bat coronaviruses and make them deadlier and more contagious to people via “humanized mice” — all part of a $3.7 million grant first exposed by White Coat Waste (WCW), but paid for by the American taxpayer.  Scientists around the world, the Federal Bureau of Investigation, and a majority of Americans now believe this taxpayer-funded animal lab to be“ground zero” for COVID-19.

The world, however, may never conclusively know the origins of COVID-19. The WIV and the CCP have refused to cooperate with investigators and have not turned over important records and data related to the U.S. government’s animal experiments.

Yet, as of today, WIV and 28 other animal labs in China are still eligible to receive American taxpayer money from the NIH for animal testing, even though the Department of Commerce has listed China as a “foreign adversary.” It has also listed Russia as a foreign adversary, but despite that designation and a White House directive to end federal support for Russian research, three Kremlin-run animal labs still remain eligible for taxpayer-funded NIH grants.

Earlier this year, WCW also discovered that the Pavlov Institute of Physiology received nearly $550,000 from the NIH in 2021. Americans’ hard-earned money was spent torturing cats in a Kremlin-run lab. In one particularly horrifying experiment, 18 healthy cats had their brains damaged, electrodes implanted into their spines and were then forced to walk on a treadmill before being killed. The same cat-abusing Russian lab received another $221,000 from NIH in 2018.

What’s worse is that the NIH — seemingly in violation of the law — exempts these and all other rogue foreign animal labs from critical oversight that is legally mandated in taxpayer-funded U.S. labs to prevent waste, fraud, and abuse. 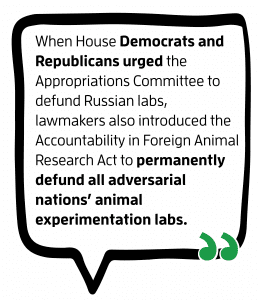 Congress has begun to recognize the dangers (and the waste) of NIH’s international adventurism. Earlier this year, when House Democrats and Republicans urged the Appropriations Committee to defund Russian labs, lawmakers also introduced the Accountability in Foreign Animal Research Act to permanently defund all adversarial nations’ animal experimentation labs. Thankfully, in a moment of clarity, the House Appropriations Committee voted unanimously to defund all labs in China, Russia, and all other countries deemed “foreign adversaries.” The proposal is deeply popular with the public with 66% supportive of such action.

In Washington, wasting your tax dollars is an art form (mostly a comedic tragedy). But it shouldn’t take another pandemic or a war for Congress to crack down on NIH’s worldwide waste in our foreign enemies’ animal experimentation labs. It should just be common sense. It’s time to stop the money and stop the madness. 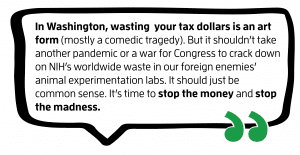 Justin Goodman is the Senior Vice President of Advocacy and Public Policy at government watchdog White Coat Waste Project. David Williams is the President of the Taxpayers Protection Alliance. 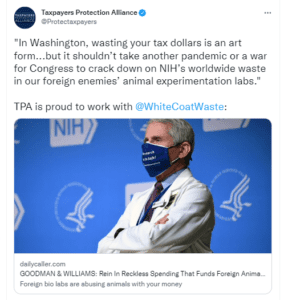