Remember when we exposed how the National Institutes of Health (NIH) was wasting your tax money to purchase dogs from disgraced breeder Envigo?

Envigo may have been shut down, but a new White Coat Waste Project (WCW) investigation has uncovered that the NIH has been bankrolling another disturbing colony of canine cruelty with your tax dollars for over 75 years! 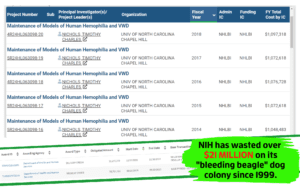 As first reported by POLITICO, Recent records we obtained through the Freedom of Information Act (FOIA) have revealed that since the Truman Administration the NIH has been wasting your tax money to fund an entire breeding colony of severely sick puppies for use in deadly experiments. The colony alone–not including the experiments on the diseased dogs–has cost taxpayers over $21 million just since 1999.

Since 1947, the NIH has funded a colony that intentionally breeds puppies to suffer from hemophilia and other bleeding disorders at the University of North Carolina-Chapel Hill (UNC). According to documents we received via FOIA, the dogs being bred include Irish Setters, Old English Sheep Dogs, Beagles, Mountain Curs, Keagles, Basenjis, Scotties, Kooikerhondjes, and Great Pyrenees.

Actual photos of the ‘bleeding beagle’ colony. Since 1947, NIH white coats have wasted your tax money to breed sick dogs including Irish Setters, Keagles, Scottish Terriers, and beagles as “walking blood banks.” This government program is still being funded.

The records we received show that at least “120 to 150 dogs” are bred each year in the colony and many are characterized as “severe bleeders.” These dogs are so fragile that they require frequent blood transfusions — so the NIH also breeds dogs without bleeding disorders to be used as a “‘walking blood bank’ of resident normal canine donors.”

According to an April 2021 report submitted to NIH by UNC and obtained by WCW, 114 of these dogs were used in experiments “largely supported by the NIH/NHLBI” in 2020. Sadly, the dogs are killed upon the conclusion of the taxpayer-funded experiments, with UNC noting that “necropsy will be performed on dogs, experimental or control, after completion of the planned experiment.”

Actual notes written by UNC white coats about the cruel and wasteful experiments. (Full documentation below)

Thankfully, Congressmembers (and Waste Warriors) Dina Titus (D-NV) and Brian Mast (R-FL) are on the case. In a September 28, 2022 letter to the NIH based on WCW’s new investigation, which you can read in full below, Reps. Titus and Mast demand more information — including the number of dogs currently confined in the breeding colony, what’s being done to them, and how much money has been wasted experimenting on them.

What are they hiding? (Other than 75 years of wasteful taxpayer funding to a colony of bleeding beagles, that is). 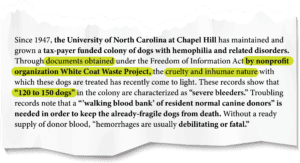 Seventy-five years is long enough. Help us end this massive government boon-doggie by taking action! To defund ALL NIH-funded dog experiments once and for all, tell Congress to pass the Protecting Dogs Subjected to Experiments Act today!

THE WORLD IS NOT A FACTORY AND ANIMALS ARE NOT PRODUCTS FOR OUR USE.
– Arthur Schopenhauer, German philosopher ( 1788- 1860)