Remember EcoHealth Alliance (EHA)? EHA is the shady group that, as we first revealed in April of 2020, funneled tax dollars to dangerous coronavirus gain-of-function experiments at the Wuhan Animal Lab that experts believe caused the COVID pandemic. Our investigations prompted the White House to cut EHA’s funding for the Wuhan Animal Lab back in 2020. We have since uncovered that EHA white coats violated federal spending transparency law, conspired with NIH to bypass a federal gain-of-function funding ban, and recklessly shipped “samples of bats and other high-risk host species” from places like Burma, Vietnam, Cambodia, and Laos to the Wuhan Animal Lab.

Despite all of this, EcoHealth Alliance is still getting millions in new taxpayer-funded grants and contracts from the National Institutes of Health (NIH), National Science Foundation, and others. 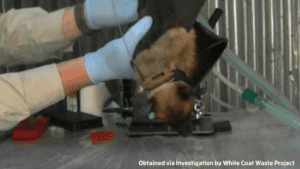 Photo of a bat being used for cruel and wasteful experiments by EcoHealth Alliance white coats.

One involves “experimental bat infections in a BSL 4 lab” using the extremely deadly Nipah virus. The NIH is also forking over tax dollars to EHA to continue collecting dangerous coronaviruses from wild bats around the world and ship them off to labs for dangerous animal experiments. Because absolutely, positively nothing can go wrong there. Where have we heard this story before?

We’ve been working with Congress to crack down on federal funding for EHA, and now lawmakers want to cut off funding to EHA, for good!

As first reported by Daily Caller, Waste Warrior Senator Joni Ernst (R-IA) has just introduced the Defund EcoHealth Alliance Act (S. 5056). The WCW-backed legislation would prohibit funding for EHA and require a report on how much taxpayer money EHA shipped to labs in China.

You can read the bill below!