White Coat Waste Project (WCW) is the only organization that has shut down any government primate experimentation labs in over half-a-decade. Our F.E.D. approach—finding, exposing and defunding wasteful taxpayer-funded animal labs—is tried and true. Case in point: WCW’s effective campaigns and lobbying have cut the Food and Drug Administration’s (FDA) abuse of primates by nearly half in recent years. 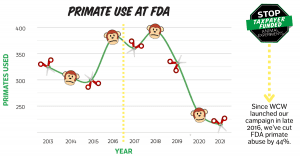 Back in 2016, we discovered that the FDA was addicting baby monkeys to nicotine in abusive and wasteful experiments that cost taxpayers $5.5 million.  WCW filed a lawsuit against the FDA to obtain documents about the testing, including videos.  We also rallied a diverse coalition including Dr. Jane Goodall and Students for a Sensible Drug Policy to press the FDA to cancel the wasteful tests that Dr. Goodall called “taxpayer-funded torture” in a pointed letter to the agency. Lawmakers from both sides of the aisle also joined WCW in criticizing the FDA’s senseless spending and called for reforms.

Following WCW’s campaign, in early 2018, the FDA announced it was canceling the tests and—for the first time in agency history—retiring the surviving primates to a sanctuary.

But that wasn’t the end because we knew there were hundreds more monkeys still locked up at the FDA.

We continued to investigate and uncovered even more waste and abuse inside the FDA’s primate labs, and rallied Congress to take action.

Following our investigations, grassroots campaigns and lobbying, in 2019, WCW worked with Congress to pass and enact bipartisan legislation directing the FDA to reduce primate testing, prioritize alternative research methods, and relocate primates to sanctuaries. We have successfully lobbied for the language to be included in every federal spending bill since.

We’re happy to report that our efforts are making a major impact.

In 2020, the FDA enacted its first-ever lab animal retirement policy, allowing primates and other animals who survive FDA experiments to be relocated to rescues and sanctuaries. 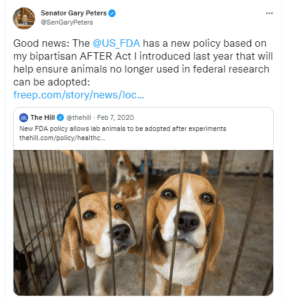 More importantly, federal records show that since our campaign began, the FDA has cut its abuse of primates in experiments—which was on the rise—by a staggering 44 percent! 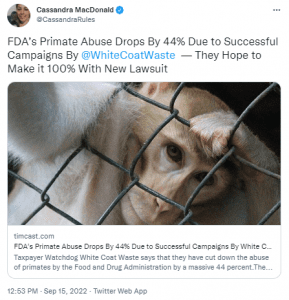 In direct response to the legislation WCW helped pass, the FDA recently told Congress that it “shares the nation’s interest in reducing the need for non-human primates (NHPs) in FDA intramural research.”

We’re incredibly proud of the progress we’re making to save animals and tax dollars from abuse by government white coats, and we’ll continue to unite liberty lovers and animal lovers to stop wasteful primate experiments at the FDA, Department of Veterans Affairs, National Institutes of Health and other federal agencies.

No animals should be experimented on. It is simply torture.

Do not spend one more cent of my taxpayer money on these cruel uneeded experiments!

Thank God for you !

Scientists are the cruelest form of life alive

stop testing on all animals asap 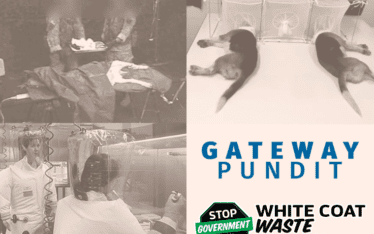