Senate Report: Lab Leak “Most Likely” Cause of COVID Pandemic

The FBI, a majority of Democrat and Republican taxpayers, and scientists and intelligence experts around the world believe that an accident at the taxpayer-funded Wuhan animal lab leak caused the COVID-19 pandemic.

Now, an authoritative new U.S. Senate report has reviewed the evidence and concluded the same: 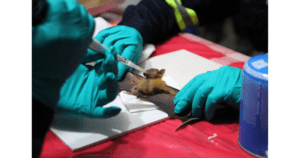 As WCW first exposed back in early 2020, a shady non-profit called EcoHealth Alliance secretively shipped taxpayer dollars to the Wuhan lab for dangerous and cruel coronavirus gain-of-function experiments on animals. Our investigations have since uncovered how EcoHealth conspired with the National Institutes of Health to bypass federal rules prohibiting these reckless animal experiments so that they could spend U.S. tax money in Wuhan to supercharge coronaviruses and make them deadlier and more contagious.

The Senate report described this scary spending and details the many grave biosafety concerns that have been documented at the Wuhan lab:

As we’ve told reporters, lawmakers, and the public, animal lab accidents are common and taxpayers shouldn’t be forced to fund dangerous, cruel, and wasteful animal experiments that can easily spark another pandemic.

Despite all of the damning evidence for a lab leak in Wuhan, the Wuhan animal lab, EcoHealth Alliance, and other dangerous and unchecked animal labs in enemy nations are still being bankrolled by taxpayers. But we’re leading efforts to stop this waste and abuse!

may the good citizens of this Nation always protest the labs that use cruel torture on animals especially dogs and cats. And it’s not much of a leap to protest also the human baby’s torture and death in the womb, Think and pray people.

thank you I have

Continue to work on this