The White Coat Waste Project (WCW) has been leading a historic campaign to end wasteful spending at the Dept. of Veterans Affairs (VA). 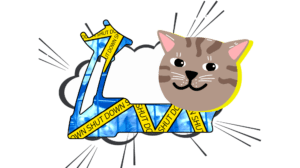 We exposed how the Louisville lab bought dozens of healthy female kittens for $881 apiece. 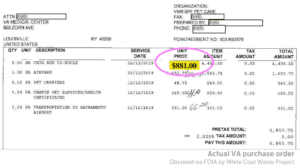 VA white coats damaged their spines and forced the disabled cats to navigate obstacle courses like this:

…while the cats were still alive.

“Decerebration” is a fancy term for severing a living cat’s brain stem and turning her into a zombie.

After that, the decerebrated zombie kittens were forced to run on treadmills. (Here’s a video of a decerebrated cat on a treadmill, to give you a sense of what it looks like.) 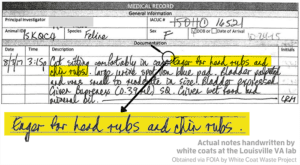 WCW united Republicans and Democrats to put the Louisville lab on the hot seat:

In August 2020, we rallied 30 bipartisan Members of Congress to demand answers from the VA.

This big win also follows our hard-hitting campaign, which:

Over the last 40 months, WCW shut down the VA’s $5 million Los Angeles kitten lab, ended $4.9 million experiments at the VA’s Cleveland lab, and secured the release of some survivors.

This win puts us closer than ever to sending all of Uncle Sam’s wasteful cat labs to the litter box of history.

What excuse do any of these labs use for their awful experiments? What do they claim they are trying to learn? Why were they not accountable to some agency to keep going.

This must be stopped!

Disgraceful no disregard for animals stop profiting from animals

Thank you for your work.

stop using our money from taxpayers for torture animals.

Good for you, WCW@!!! I’m so thankful for all you’ve done! Keep it up until no animal is used and abused in any lab anywhere! I’m with you all the way!!!

Thank you for continuing to fight for cats and kittens in these horrible, sadistic labs that continue to torture innocent. helpless cats and kittens. These innocent animals shouldn’t be sent to these nightmare labs!!!!!

You are heroes for cats and kittens!!!!!

Forty years of Congressional oversight indifference to the suffering of innocent cats just illustrates how much the Congress has abdicated all of its Constitutional budget/oversight authority to the executive branch. This indifference is just a back door path for run-away deregulation by the corporatized federal gov’t. The gov’t is not protecting the vulnerable in society.

Please, we must all continue the fight against these heinous acts of animal abuse and do what we can to shut down this waste of taxpayer’s money and, more importantly, to save the lives of these beautiful animals!

Stop the abuse ,torture, and murder of innocent animals !

Thank you to WCW for shutting down facilities who test on animals!

I DEMAND ALL LAWS PROTECT ALL ANIMALS LIVES AUTOMATICALLY WITHOUT THE NEED FOR A PETITION! I DEMAND SWIFT AND SEVERE AND IMMEDIATE PUNISHMENT FOR ANY DESPICABLE DISGUSTING GREEDY SELFISH SUB HUMAN PIECES OF SHIT WHO HURTS MAMES ABUSES EXPLOITS OR KILLS ANY ANIMALS!

More people need to know what is going on.

It is beyond my comprehension to imagine how a member of the human race can abuse and torture animals so cruelly. Please, Lord, stop this cruelty to your beautiful and beloved creatures.

It’s beyond me how the “researchers” could torture the cats and dogs and not feel any empathy!

Hallelujah! Expressions of joy in my heart. Thank you to those who maned up and got the job done. The government has never protected the vulnerable. When you hear words like kitten slaughter house, spinal cords completely severed, some survivors, mutilated and death. The time has come to get these abusers and i hope they just don’t walk away. I hope they are charged with abuse. You hear how the experiments did nothing for research. I hope these animals didn’t die in vain. Those who did these experiments know who you are.

Barbaric and grotesque, intentional cruelty to animals in any form for any reason is the first sign of human depravity.