As first reported in the Daily Caller and covered by Breitbart, the NIH’s top lobbyist said at a June 2022 meeting that lawmakers working to crack down on dangerous animal experiments in foreign enemies’ labs are reacting to “conspiracy theories.” 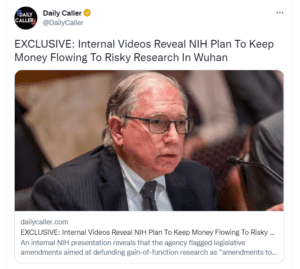 NIH flagged four “Amendments to Watch,” at the meeting. They were bills offered by Reps. Mike Burgess (R-TX), Darrell Issa (R-CA), Ronny Jackson (R-TX), Michael McCaul (R-TX), and Brad Wenstrup (R-OH) to defund GOF, the Wuhan Institute of Virology and other foreign enemies’ animal labs. NIH also warned that it expects the debate about this issue to continue in the next Congress.

As evidence continues to mount that NIH-funded GOF experiments on bats and humanized mice are the “most likely” cause of the COVID-19 pandemic that’s killed 7 million people to date, we promise it will! 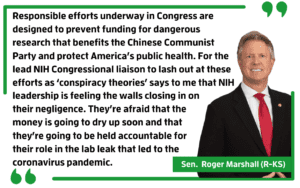 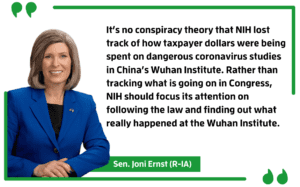 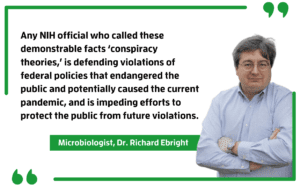 Our effective efforts are scaring the NIH! Their top white coats are now spreading misinformation and circling the wagons because their worst nightmare is coming true:  Democrats and Republicans in Congress. along with taxpayers across the country, have united to cut the purse strings on the agency’s wasteful, cruel, and dangerous spending on animal experiments.

The NIH is addicted to spending, so the solution is simple: