This past June, following explosive White Coat Waste Project (WCW) exposés of reckless government spending by the National Institutes of Health (NIH) in animal labs in Russia and Wuhan, we worked with Congress to pass historic legislation to cut taxpayer funding for 30-plus animal labs in these and other adversarial nations.

Despite action from White Coat Waste Project, taxpayers, Congress, and the White House, we recently exposed that the NIH is aggressively resisting reforms and wants to keep shipping your tax dollars to white coats in our enemies’ animal labs, including money to fund dangerous gain-of-function animal experiments at the notorious Wuhan Institute of Virology. 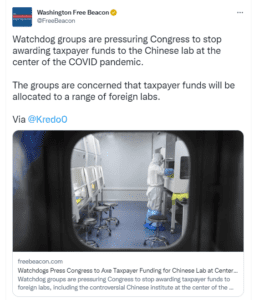 Now, lawmakers are finalizing a federal spending package for 2023, and WCW has assembled a diverse coalition that’s formed like Voltron to urge Congress to ensure no more taxpayer dollars are shipped to our adversaries’ animal labs (like this Kremlin-linked lab that recently tortured cats with over $700K of our money!).

As reported in Washington Free Beacon, WCW is proud to be joined in this vital effort to protect animals, taxpayers, and national security by our friends at Taxpayers Protection Alliance, FreedomWorks, American Conservative Union/CPAC, People for Liberty, Free The People, and Advancing Law for Animals. 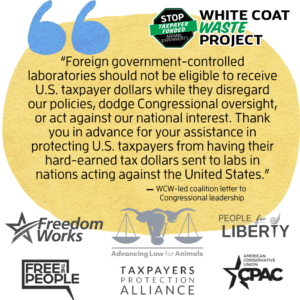 In a letter to Congressional leaders including Reps. Rosa DeLauro (D-CT) and Kay Granger (R-TX) and Sens. Patrick Leahy (D-VT) and Richard Shelby (R-AL), our coalition explains that “The National Institutes of Health (NIH), with little accountability to Congress or the administration, continues to authorize funding for animal experimentation laboratories directly controlled by foreign adversaries that act contrary to the national interest of the United States.” 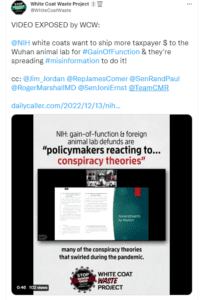 Polls show that 71% of taxpayers across the country—Democrats, Republicans, and Independents alike—want Congress to defund torturous and wasteful foreign adversaries’ animal labs. You can make your voice heard by urging Congress to pass the Accountability in Foreign Animal Research (AFAR) Act to defund these dangerous facilities! 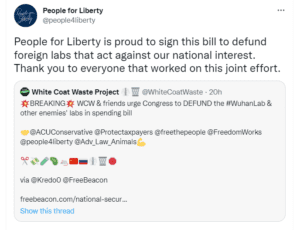 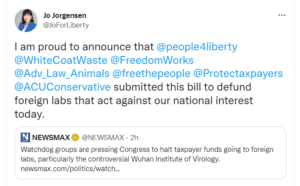 Read the full letter sent to Congressional leaders below: