It’s a Festivus for the rest of us! Famously inspired by Seinfeld, Festivus entails enjoying a nice meal of meatloaf on a bed of lettuce, staring longingly at the tinsel-free Festivus pole, and, of course, airing grievances.

And, boy, Sen. Rand Paul (R-KY) has plenty to complain about in his annual Festivus Report on government waste, with a little help from his friends here at the White Coat Waste Project. 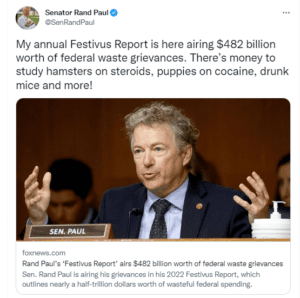 We’re proud that Sen. Paul’s 2022 Festivus report once again features wasteful taxpayer-funded animal tests uncovered by WCW, including an experiment from our Worldwide Waste investigation where white coats in a Chilean lab wasted over $1 million U.S. tax dollars to train mice to binge drink alcohol in the dark. 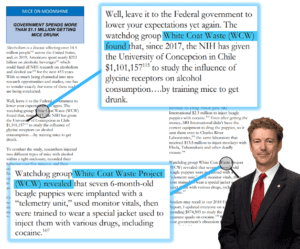 Sen. Paul’s report also highlighted our Coke Hounds exposé where we exposed how the NIH wasted over $2 million to inject beagle puppies with cocaine. 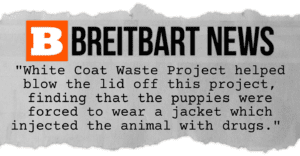 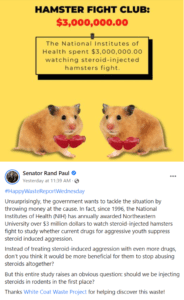 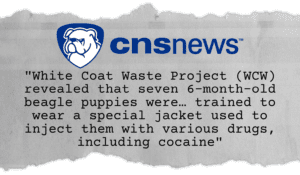 Waste like this is how taxpayers end up with a $20-billion-plus bill for cruel and pointless animal experiments each year.

You can read the rest of Sen. Paul’s Festivus report here.

For years, WCW has been proud to work with Sen. Paul to hold bureaucrats accountable for wasteful spending on animal experiments at home and abroad, including Fauci’s beagle tests in the US and Tunisia, addicting fish to nicotine in the UK, blowing lizards with leaf blowers, teaching pigeons to gamble, and spraying drunk rats with bobcat pee. We’ve also been working with Sen. Paul to defund the Wuhan lab and dangerous gain-of-function experiments. 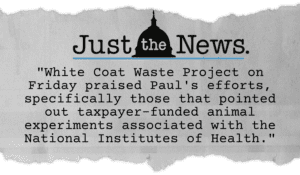 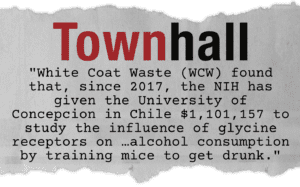 We won’t wait until next Festivus to cut down on this ridiculous wasteful spending. A growing majority of taxpayers—from Democrats to Republicans to Independents—oppose animal experiments and do not want to be forced to pay for them.