Rep. Titus & WCW Op-ed: Animals should be treated with care, not cruelty

Animals should be treated with care, not cruelty
NIH should follow VA example and end cruel experiments on dogs

In recent years, the National Institutes of Health (NIH) has been under fire for its wasteful, unproductive, and cruel experiments on dogs. Most recently, we exposed that for 75 years, the NIH has spent tens of millions of tax dollars to fund a dog colony that breeds up to 150 puppies a year, including beagles, Scotties, and Irish setters, to suffer from bleeding disorders. While other federal agencies have created plans to phase out wasteful animal testing, the NIH continues to lag in this effort.

In 2016, we worked together to roll out a landmark investigation called “Spending to Death” which documented the abuse of dogs at in-house labs, including the NIH and the Department of Veterans Affairs (VA).

At the time, we found that the VA was spending millions to conduct the most painful dog experiments inside the federal government. Records obtained by the White Coat Waste Project (WCW) through the Freedom of Information Act revealed cruel experiments at VA labs nationally where pain relief and anesthesia were denied to many puppies. In the wake of our campaign, people across the country, including a bipartisan coalition of Members of Congress, were rightfully appalled by the VA’s torturous actions.

Following our efforts, the National Academies of Science, Engineering, and Medicine conducted an independent two-year study concluding that most VA dog experiments were unnecessary. And a VA Inspector General report that we prompted found that the VA funded and conducted some of its dog testing illegally.

With a broad coalition of animal advocates, veterans, and lawmakers, we introduced and championed the PUPPERS Act to defund the VA’s heinous dog experiments. The bill attracted 125 bipartisan cosponsors, demonstrating that cutting wasteful government spending that hurts dogs is a common goal.

Additionally, we secured language in a government spending bill to prohibit funding for new VA dog experiments except in very rare circumstances that require personal sign-off by the VA Secretary. Since 2018, we have worked to ensure that this provision has been included in every VA spending bill. Beginning in 2019, the language was expanded to demand that the VA phase out dog experiments, as well as testing on cats and primates, by 2025.

The VA now says that it “is completely aligned with Congressional calls to reduce the use of sensitive species (canine, feline, non-human primate) in VA research studies.” The VA also enacted the first ever agency wide policy letting the public adopt survivors, going so far as calling lab animal retirement an “ethical obligation.”

Following a multi-year campaign, painful dog testing at the VA has been effectively ended. When we launched this fight, over 200 dogs a year were experimented on by VA labs. Now no dogs are being abused in painful VA experiments.

We are proud to have led the only public policy effort in U.S. history to successfully shutter dog experiments across an entire federal agency.

Now is the time for the NIH to follow the VA’s example. A July 2022 national poll of 1,000 Americans conducted by Lincoln Park Strategies found that over 70% of taxpayers want to cut funding for NIH’s puppy experiments. In response, bipartisan legislation has recently been introduced to do just that. Last Congress, we proudly backed bipartisan legislation to prohibit NIH from spending taxpayer dollars on dog testing. Similar bills are coming this year.

Taxpayers should not be forced to bankroll animal abuse. It is past time to hold the NIH accountable. 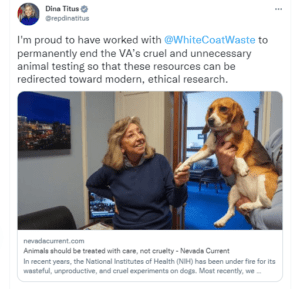