As we recently reported, after three years of White Coat Waste Project (WCW) efforts—and inaction and obstruction by Congress—the newly-minted House leadership is finally starting to investigate whether white coats in Wuhan wasted our hard-earned money on reckless animal experiments that sparked a devastating pandemic.

This can’t come fast enough for the millions of taxpayers in the great State of Texas who are rising up and demanding accountability! 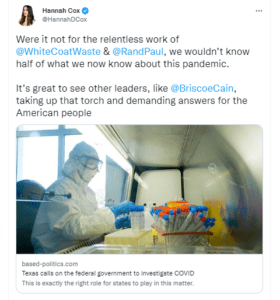 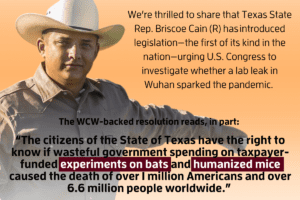 We applaud Rep. Cain for demanding that the feds finally investigate if a lab leak caused COVID, as Congress, the FBI, a majority of Democrat and Republican taxpayers, and experts around the world believe happened. 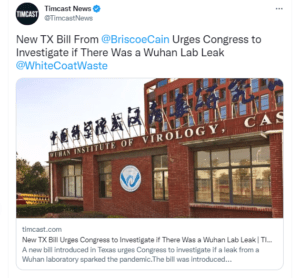 This effort is particularly timely given that Uncle Sam continues to make it rain millions on the shady and serially-noncompliant non-profit EcoHealth Alliance that funneled taxpayers’ money to the Wuhan lab for gain-of-function experiments on animals in violation of a federal ban.

Since early 2020, WCW has been leading the charge to urge the White House and Congress—and working directly with federal lawmakers—to investigate what went down in Wuhan.

Last year, we joined experts at the Hudson Institute to discuss what a Congressional probe should focus on: 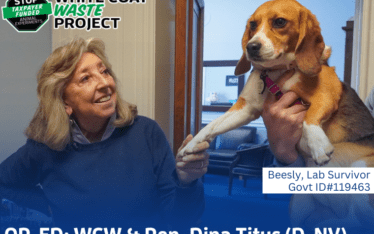