W.O.W., we call this week’s  Waste of the Week the Froot Loophole.

And it’s shocking what these “cereal killers” did to innocent victims using your money, behind closed doors.

Unfortunately… we mean that ⚡ literally⚡.

This is actual footage of the taxpayer-funded poisoned Froot Loop experiment. You can see the rat examining, then picking up and eating the poisoned cereal. The government lab initially tried to keep this video a secret. So we got our lawyer involved. And we got the video.

There, government white coats starved some rats so they would be extremely hungry.

They put *poison* on a single Froot Loop.

Uh huh, the children’s breakfast cereal, which you probably (hopefully!) usually associate with something a little more delightful than *this*.

Back to *this*: The government white coats gave the poisoned breakfast cereal to the starving rats, and filmed them eating the deadly food.

After that, they injected the rats with a drug, knowing the combination of the poison and drug would cause excruciating suffering.

For a full day, these sick white coats watched and took more videos while the rats had seizures and convulsed.

In this footage, a rat is experiencing convulsions after eating a poisoned Froot Loop and receiving an injection. The government white coats watched and filmed the rat in pain for as long as one full day, without administering any relief. Because of weak federal transparency laws, we do not know if this rat survived this stage of the experiment. The FACT Act would close what we call the “Froot Loophole” allowing government animal labs to avoid public disclosure.

Any rat who survived this part of the abuse was then placed in a dark torture box they couldn’t escape… where they were subjected to bright flashing lights, startlingly loud noises, and ELECTRIC SHOCKS, before being killed.

They didn’t film that part.

The government white coats knew these “maximum pain” experiments would hurt. By design, they gave the rats NO pain relief to alleviate their suffering.

And they reached into your pocket, to make you pay for it.

Yeah, this 💩 is being paid for with taxpayer dollars.

The thing is that under current law, the Dept. of Defense and other government agencies can take as much of your money as fits in their hands, but they are under NO obligation to tell you how much of it they’re using to abuse animals for what’s called “toxicity testing.” They don’t even have to tell you how many animals they’re abusing!

They’re allowed to keep their animal abuse secret even though these very same agencies are legally obligated to reduce the amount of animals used in toxicity testing, and replace the animal tests with non-animal alternatives which are cheaper, more accurate, and far less cruel!

We are fighting to close this Froot Loophole.

A new bipartisan WCW bill introduced by Waste Warrior Ken Calvert (R-CA) would do just that. 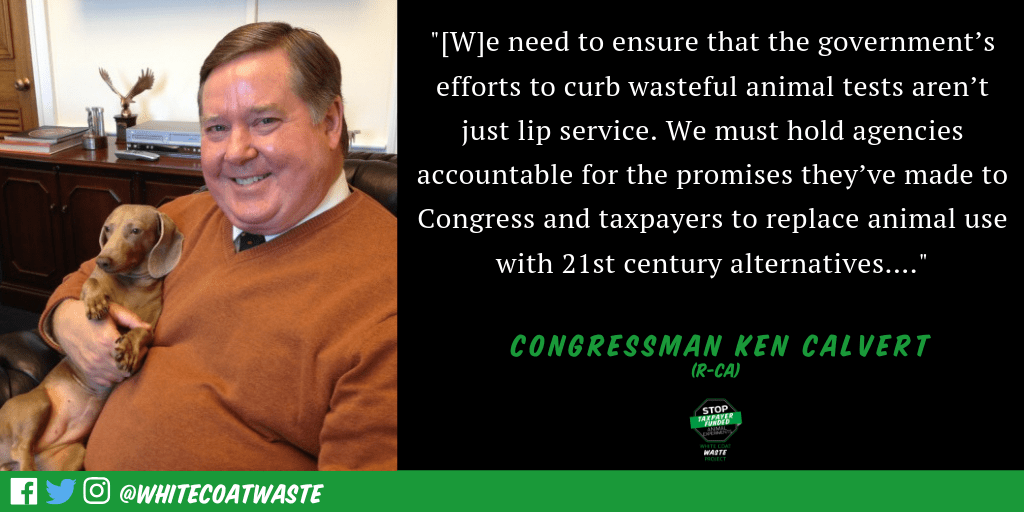 The Federal Accountability in Chemical Testing Act—the FACT Act—will require any federal agency that conducts or requires toxicity testing to report the details to the public and explain their federally-mandated efforts to curb this waste and abuse.

Abuse that, as Rep. Calvert notes,  WCW has exposed as heinous, expensive, wasteful, and all-too common: 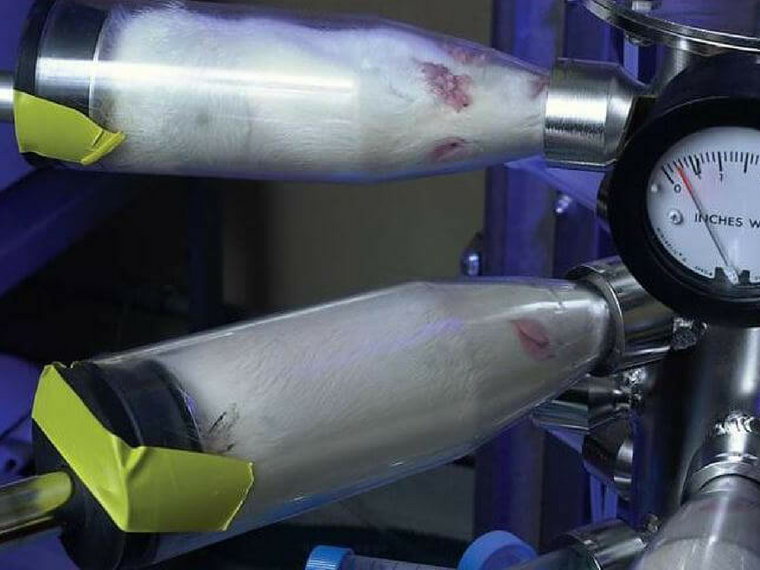 Tax dollars are used to force animals to breathe chemicals and other substances in inhalation chambers like these. Under current law, the agencies can keep the details of these tests a secret from the taxpayers forced to pay for them.

A supermajority of taxpayers from both parties agree that federal agencies need to be transparent and accountable, and they’ve been saying they want this change for a very long time now.

Even back in 2016, polling conducted by Lincoln Park Strategies showed 73 percent of Republicans and 68 percent of Democrats want federal agencies to disclose to the public how much taxpayer money they spend on animal experiments, and how many animals they use in the experiments.

Happy to help @WhiteCoatWaste pry these videos from the Department of Defense under FOIA. DOD is poisoning rats with Froot Loops for some horrific reason. https://t.co/13NgQ4nRkM

You can’t fight what you can’t see. You deserve to know how many taxpayer dollars these government white coats used to feed poison-laced Froot Loops to rats before torturing them with electric shocks, and killing them, and how many rats they did it to.

Just imagine what else they’re using your money to do to cats, dogs, and other innocent victims behind closed doors.

Please help by urging Congress to pass the FACT Act and improve transparency about taxpayer-funded animal testing and progress to END IT!

WHAT THE HELL IS WRONG WITH THESE HUMAN BEINGS ?! THIS IS HORRIFIC, BARBARIC TORTURE !!!