It’s truly scary how agencies from Veterans Affairs to the Environmental Protection Agency have been wasting your tax dollars to buy animal experimentation devices that wouldn’t be out of place in Dr. Frankenstein’s laboratory.

Just in time for Halloween, check out the list we’ve compiled using government data and open records to see what animal torture tools government laboratories have been purchasing with your money. 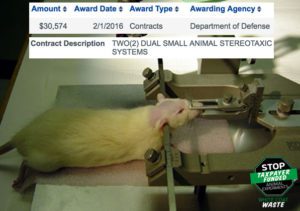 Just like Frankenstein’s poor monster strapped down to the table, stereotaxic systems are used to hold animals in place while they have their heads cut open and their skulls drilled into. We think the US Army can find better places to spend that $30,000.

Mice are locked into this system to be tattooed for identification in experiments. Yikes! Maybe the EPA should be focusing less on tattooing mice and more on preventing toxic waste from spilling into America’s rivers? 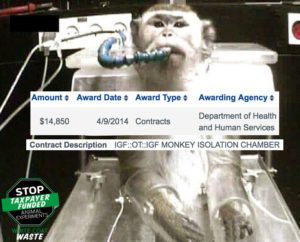 These tiny, dark isolation chambers are boxes where monkeys locked in restraint chairs are confined during addiction experiments at the National Institute on Drug Abuse. With piles of purchases like these, it’s not hard to imagine how the NIH racks up a $12 billion tab for wasteful animal experiments each year.

Considering how many problems the VA has been having providing services to veterans, maybe they should have spent this $58,000 on something other than a box to shock mice and blast them with loud noises and videotape the results. Or if they really wanted to terrify mice, maybe they could have them treated at one of their clinics.

The last torture device purchase on our list is the most expensive. Better known as Skinner boxes, operant chambers are used to restrain and often shock monkeys and rats to force their participation in experiments at FDA laboratories. Maybe agency chiefs need to undergo psychological studies so we can understand why they spent a quarter million dollars on these devices when FDA reports 9 out of 10 drugs fail in human trials because animal tests don’t accurately predict their safety and effectiveness?

What you can do

Horrendous treatment of innocent animals-you should be ashamed!

I am vegan and animal right activist from Poland. I have seen horrible things done on animals in my life. These, like all the others, are completely sensless and unimaginably cruel. A huge THANK YOU to all of you people who make these things transparent to the rest of the citizens in your country.

Barbaric! Disgusting! Enough is enough. Stop torturing and murdering innocent animals! With modern technology NONE of these tests are necessary.

These experiments are inhumane and wrong. Please for the love of God stop.

I am against testing of animals peroid. These tests in no way prove anything medically concerning correlation in humans. They are a different species. Human testing on anything other than humans is of no use, is blatently torture and a total waste of taxpayers dollars. We have, sick,hungry and homeless that can benefit from these wasted monies.

I admire the work your group does. Please look at the cover up UCLA vivisectors pulled on me via an under cover informant/agent from 1991 April/May Animals Voice magazine. FACEBOOK CORY CATS photo album [email protected] Represented myself against UCLA Vivisectors