As first reported in an Arkansas Democrat-Gazette cover story, White Coat Waste Project recently won a federal lawsuit that reveals why the Food and Drug Administration (FDA) took quick and decisive action to cancel its nicotine addiction experiments on baby monkeys after criticism from WCW.

After the FDA initially refused to do so, WCW’s lawsuit has compelled the agency to release dozens of never-before-seen videos of its taxpayer-funded nicotine tests on monkeys and more than 2,000 related documents. This is a major win in our ongoing campaign for more transparency and accountability about government spending on wasteful animal experiments. WCW was represented in the lawsuit by the Law Office of Matthew Strugar.

The troubling videos taken at FDA’s Arkansas facility show baby monkeys locked alone in small cages, wearing vests that contain catheters to infuse nicotine, exhibiting distressed behavior, and even being taunted by staff. Some of the videos depict the monkeys confined in dark experimental chambers and slumped over after receiving hits of nicotine. 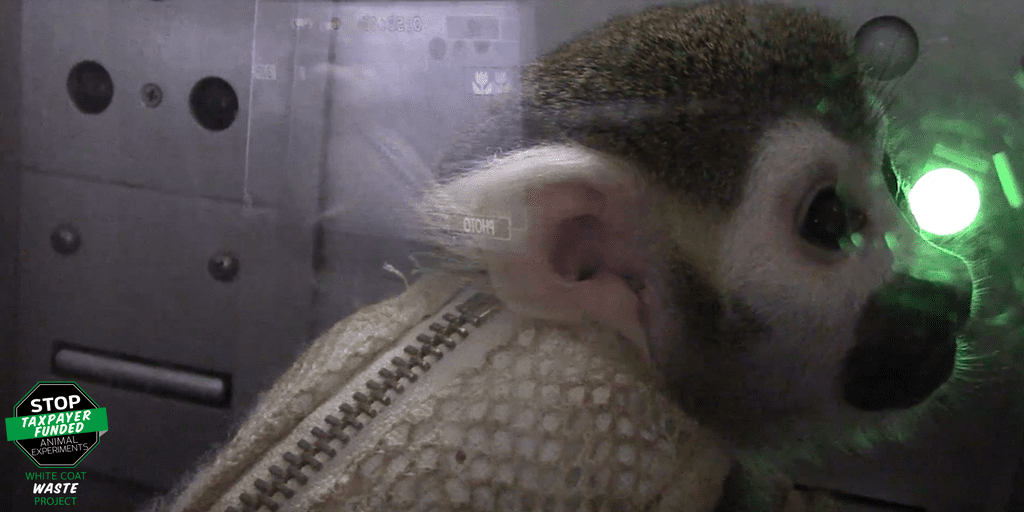 Squirrel monkey confined in a nicotine infusion chamber at the FDA.

Additionally, documents obtained by WCW through the lawsuit detail four monkey deaths that occurred on the project since 2015 and were not properly reported.  Records obtained separately by WCW detail other instances of waste and abuse at the same FDA facility, including animals killed by mishandling, unapproved procedures, and animals dying from starvation.

We applaud the FDA and commissioner Scott Gottlieb for cutting this waste and abuse and taking steps to review all of the agency’s animal experiments.

Next, tell Congress to stop the Department of Veterans Affairs from using your taxpayer dollars to fund “maximum pain” experiments on dogs. Urge your Congress members to support the bipartisan PUPPERS Act.

Amen!! I hope theses scumbags who did this never get to be around animals

Let’s face it this is HITLER ALL OVER AGAIN BUT IN THE USA….these heinous experiments are just one of the many, many ways that you and I are finding these HITLER HOLOCAUSTS!!!! May the sick creators of these horrific torture experiments and the perpetrators who car tdd y them out find out about how KARMA works!!! SHAME ON HITLERS ANIMAL CONCENTRATION CAMPS exist anywhere!!!