Fauci is addicted to spending on animal labs. But this time, WCW investigators have discovered that the ‘good doctor’ has been doing some VERY bad things…to MONKEYS!

This monkey was infected with a deadly disease in a Fauci-run lab and photographed by government white coats. Actual photo obtained by WCW investigators.

Off the southeast coast of South Carolina lies Morgan Island. This small, desolate marshland is uninhabited by humans, but home to a vibrant community of thousands of monkeys, earning it the nickname ‘Monkey Island’ from Atlas Obscura and others.

Don’t start making any travel plans, though. Unauthorized visitors are strictly prohibited from setting foot on the island’s swampy shores, because Morgan Island is home to one of the government’s darkest, most horrifying secrets. The island is not a sanctuary. It is not a wildlife refuge. It’s a flesh factory, where monkeys are born to suffer and bred to die.
Every year, around 500 monkeys are taken from their home on Morgan Island, and shipped to U.S. labs, where they’re subjected to batteries of extraordinarily painful experiments, and infected with the most dangerous and deadly diseases known to man. 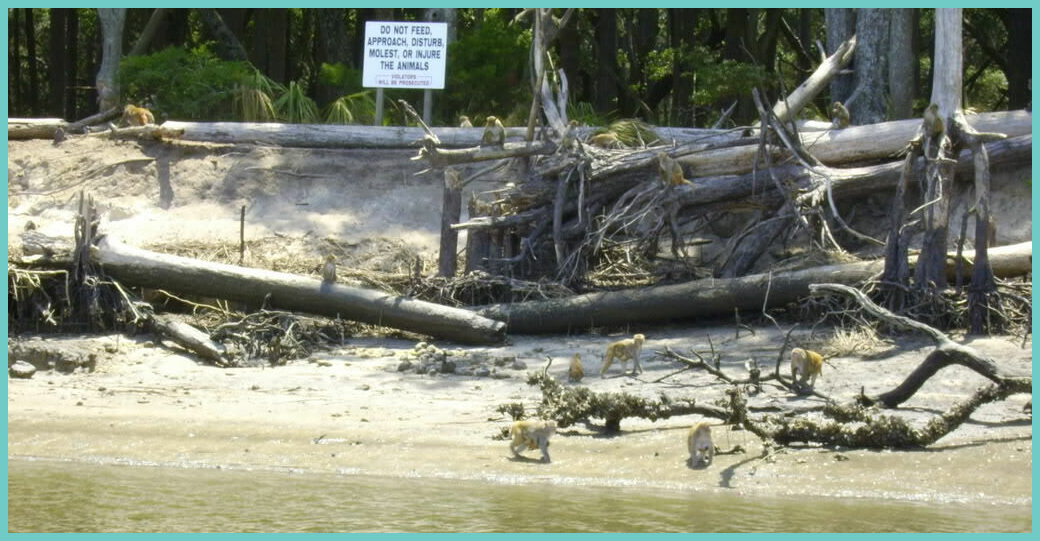 Photo by Cockytalk / CC BY

No monkeys ever return to Morgan Island…because if disease doesn’t kill them, Dr. Fauci’s white coats at NIAID will.

You see, the monkeys of Morgan Island are owned by the NIH. To be precise, they’re property of Dr. Fauci’s agency, the National Institute of Allergy and Infectious Disease.  Our investigators have discovered that Fauci is wasting a lot of tax dollars on this government monkey business — $13.5 million since March 2018, with $8.9 million coming directly from NIAID.

.@RepNancyMace on her efforts to spotlight the federal government’s experiments on dogs and monkeys: “Animals and animal experiments are not right or left. This is an issue that can bring both sides of the aisle together.”#NextRevFNC pic.twitter.com/GMcYZ16ek0

Update (November 29, 2021):
NIAID has confirmed it owns the monkeys of Morgan Island. In a statement provided to Timcast, a NIAID representative wrote: “The island is currently owned by the South Carolina Department of Natural Resources and leased by Charles River Laboratories, Inc., as part of a contract with NIAID. The nonhuman primates raised on Morgan Island are owned by NIAID.” 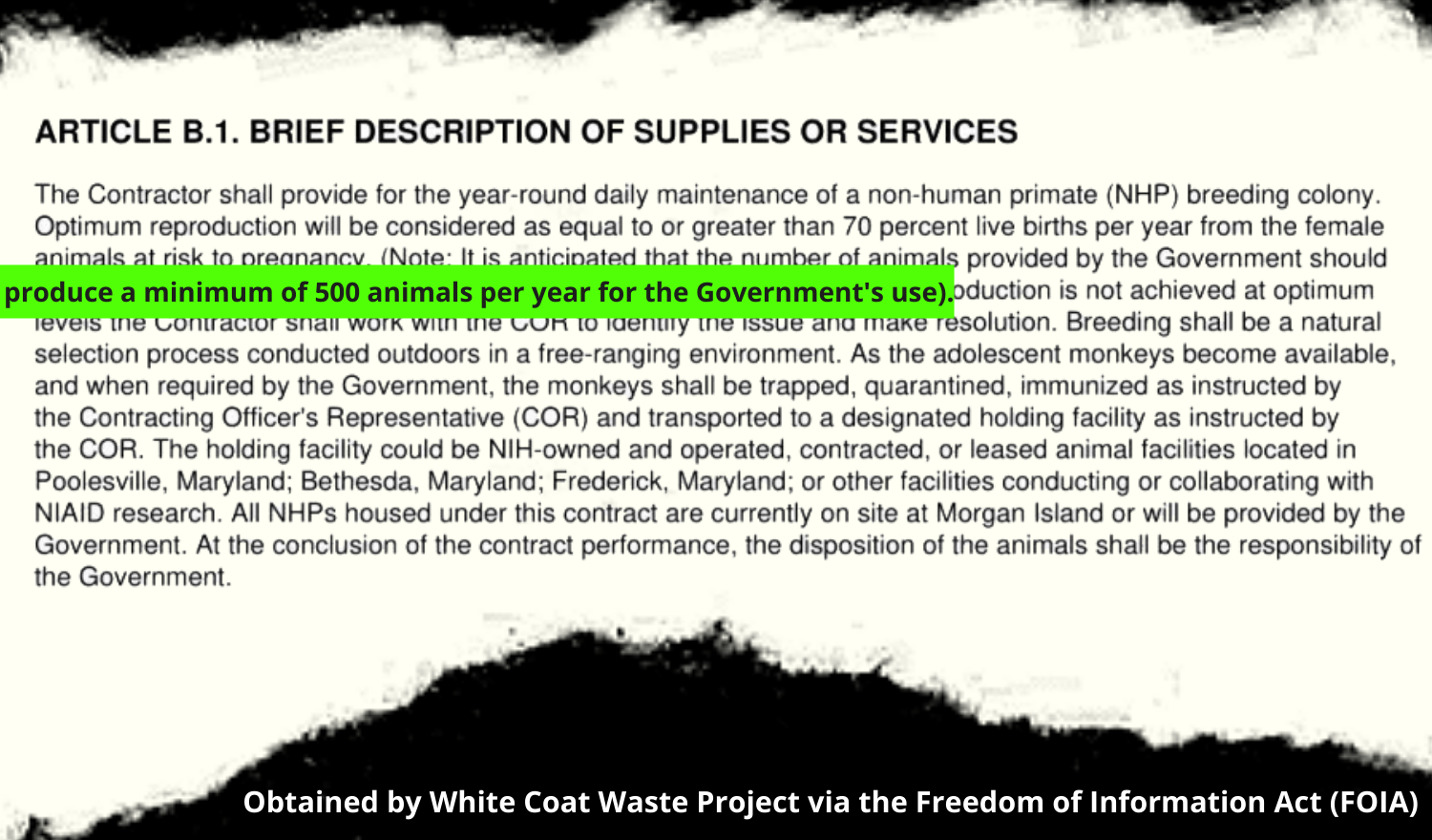 After being taken from their home on Morgan Island, the monkeys arrive at various laboratories.

Then the torture begins.

In one experiment, which the authors acknowledge was “funded by the Intramural Research Programme of the NIAID,” twelve monkeys were injected with deadly Crimean-Congo Hemorrhagic Fever virus (CCHFV). They developed fever, lethargy, and hemorrhages before they were killed — even the monkeys who survived the initial infection.

Other experiments that WCW unearthed are even worse. NIAID has funded extensive numbers of “maximum pain” experiments on primates where pain relief is completely withheld, including: 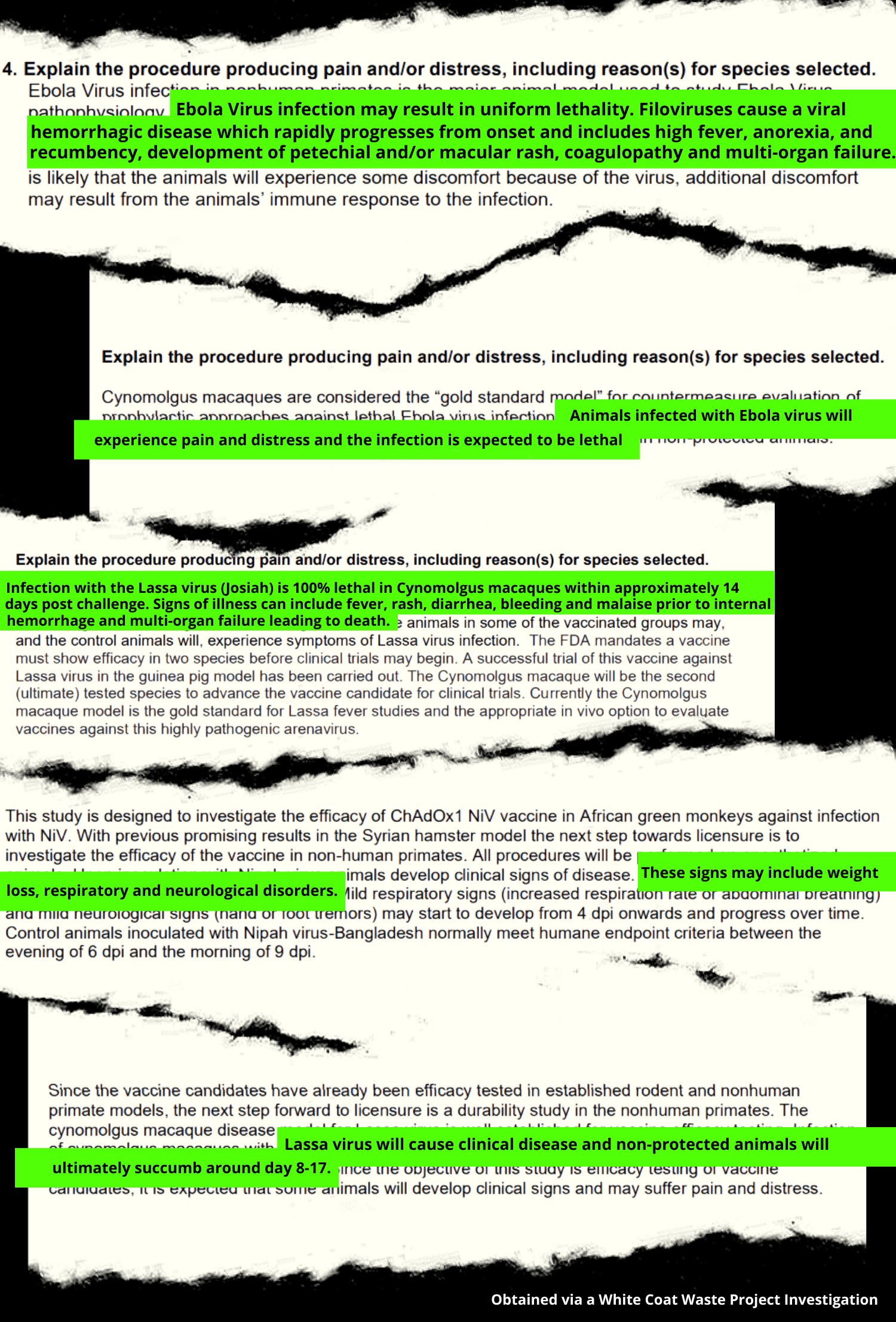 Ebola is a deadly, painful disease, which the NIH readily admits: “Animals infected with Ebola virus will experience pain and distress and the infection is expected to be lethal in non-protected animals.”

So too is the Lassa virus: “Infection with the Lassa virus (Josiah) is 100% lethal in Cynomolgus macaques within approximately 14 days […] Signs of illness can include fever, rash, diarrhea, bleeding and malaise prior to internal hemorrhage and multi-organ failure leading to death. The animals in some of the vaccinated groups may, and the control animals will, experience symptoms of Lassa virus infection.”
We’re speechless.

A “minimum” of 500 monkeys must be handed over to the government every year for experimentationhttps://t.co/67L3Ueh3Dz

“In many of these experiments, Fauci and staff intentionally withhold pain relief,” Goodman said.

A group that investigates taxpayer-funded experiments on animals has disclosed a document exposing the #NIAID‘s “excruciating experiments” on rhesus monkeys. https://t.co/n7Cd9Ul0ux

This sounds like a terrible movie: there’s an island off the coast of S. Carolina where Fauci’s NIAID has monkeys bred for animal experiments. NIAID has spent nearly $9M to breed monkeys to be injected with Ebola, Tuberculosis and other deadly viruses. https://t.co/vNlg6DgswX 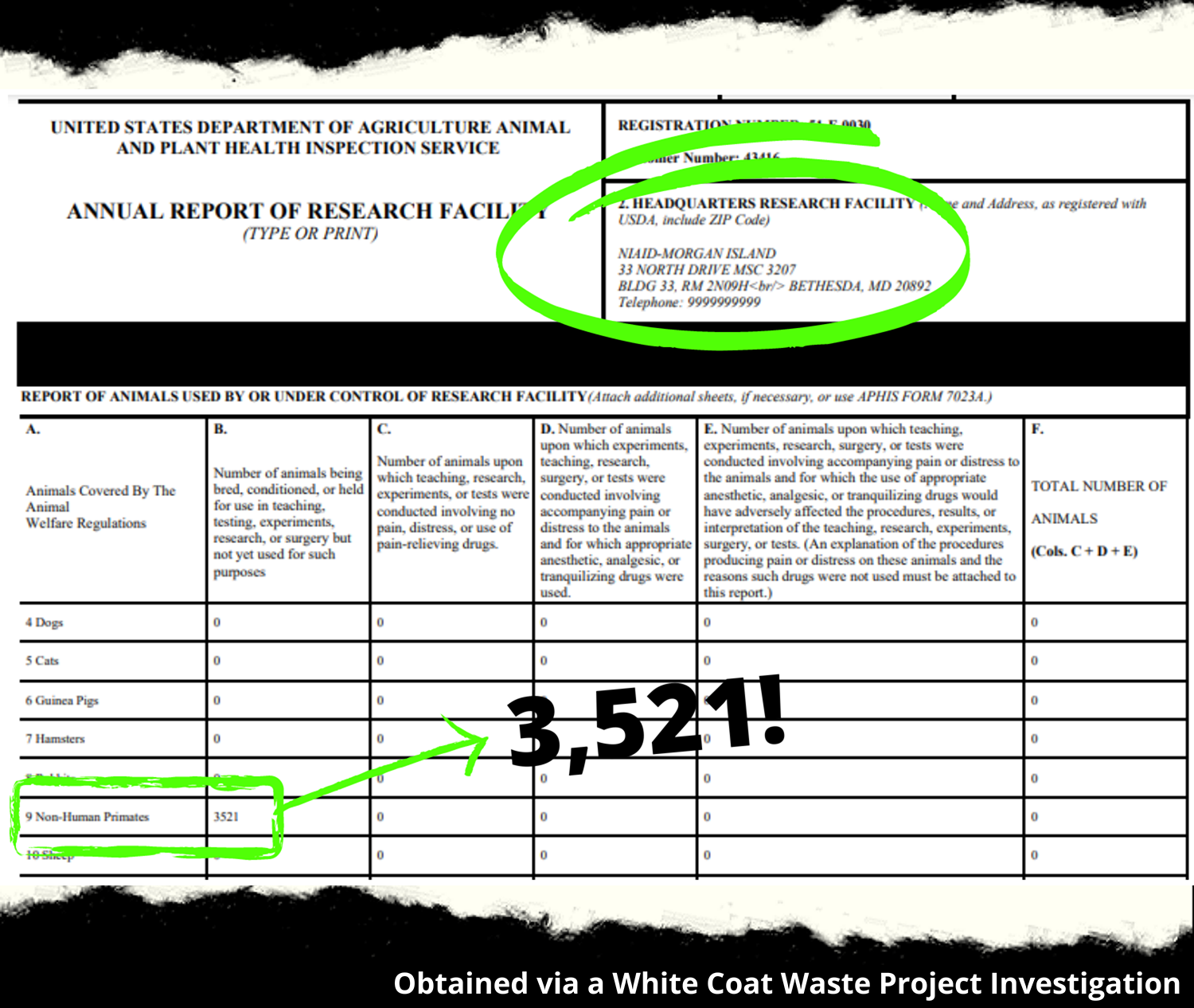 Primate testing is cruel and wasteful — which is why it’s being phased out from many government departments and agencies, including the Department of Veterans Affairs (VA), which has committed to phasing out primate testing by 2025. Thanks to WCW’s hard-fought advocacy campaigns, the VA has even ended some of its most wasteful experiments early, including its infamous “Angel Dust” and brain damage experiments in Minnesota, and its spine-severing ‘dexterity’ experiments in Connecticut.

But while the VA and others are phasing out their primate experiments, the NIH (and NIAID) are doubling down.

Is this how you want your tax money to be spent?

Take action! Tell the NIH to stop its monkey business, and stop all government experiments on primates!

How many public servants looked the other way? Nobody had any empathy?

Hell is truth seen too late.

Stop the unnecessary wasting of money and torture.

Stop wasting the taxpayers money for torture.Karma will get you in the end,Karma is real.You shouldn’t kill or torture God’s creatures.I don’t know how you people can sleep at night knowing all these animals are suffering and in pain constantly.A slow death.Damn you all!!

How does this get stopped????

Stop the funding, close Morgan Island, allow the monkeys to live, be happy.

Cruel , evil people doing these unnecessary experiments. I thought that island was a sanctuary. this insanity NEEDS TO STOP- “NOW” not 5 years from now!

I agree wholeheartedly, this needs to stop immediately, not even 1 year from now. All experiments on any animal are cruel and inhumane. They need to be stopped immediately!!!! I believe Fauci should be held responsible for this!!!!

All animal experiment labs should be shut down and the cruel, heartless people involved should be sent to prison.

Stop these unnecessary and EVIL experiments!! I hope Fauci and his monsters suffer Every evil they have influcted on these innocent creatures

Agree with you totally!

Is orribile experiment on animal, stop this cruelty.

Why do we call our self humans when we do this

Please stop that unnecessary practices
.those kind of people should be I. The jail