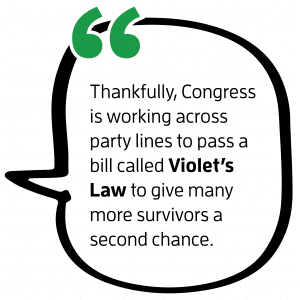 Four thousand beagles previously locked up an abusive facility that bred dogs for painful and wasteful experiments are being adopted out to loving homes nationwide, including in Michigan. Social media has been inundated with videos of these sweet puppy survivors enjoying their first toys, their first treats, their first baths, and even their first experiences walking on grass. Unfortunately, I know from personal experience that most dogs and other animals abused in our government’s laboratories are not as lucky. Thankfully, Congress is working across party lines to pass a bill called Violet’s Law to give many more survivors a second chance.

Back in 2018, when I was serving in the House of Representatives, my friends at the White Coat Waste Project (WCW) revealed stomach-turning and downright mad experiments on kittens performed at a U.S. Department of Agriculture (USDA) lab in Maryland. In this secretive government program, thousands of kittens were bred and purchased from places like Envigo, forced to eat infected raw meat, and finally killed by bureaucrats in white coats.

WCW even exposed cannibalism tests in which the USDA kittens were forced to consume cat meat purchased from disease-ridden ‘wet markets’ in China. Beyond their jaw-dropping cruelty, these experiments were exorbitantly expensive — running continuously inside the government and on the American taxpayer’s dime for nearly five decades, while wasting over $22 million. 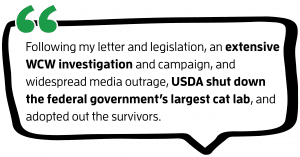 I immediately demanded answers, then introduced new legislation with colleagues on both sides of the aisle, the KITTEN Act, to defund the USDA’s “Kitten Slaughterhouse.” Following my letter and legislation, an extensive WCW investigation and campaign, and widespread media outrage, USDA shut down the federal government’s largest cat lab, and adopted out the survivors.

To be more precise, USDA tried to adopt out the survivors. Unfortunately, USDA had no policy in place for the retirement of lab animals upon the conclusion of experiments, so it actually had to sell the surviving cats as “excess property,” just like old desks or office chairs, at the cost of $1 apiece.

There’s a word for this: bureaucracy.

Had there not been so much media interest in USDA’s taxpayer-funded kitten experiments, what would have happened to the survivors? Sadly, you already know the answer: they would have been slaughtered and incinerated. According to documents obtained by WCW’s Freedom of Information Act investigation, around 3,000 kittens had already been needlessly killed by white coats at USDA, even though they were healthy enough to adopt.

To this day, USDA still does not have a retirement policy for its surviving lab animals, despite a recent Congressional mandate for them to do so. Many bureaucrats in white coats at other federal animal testing agencies still refuse to let families adopt survivors — even though hard-working Americans foot the $20 billion annual bill to purchase and experiment on our furry friends.

Bottom line: taxpayers ‘bought’ these lab animals; Uncle Sam should give them back! 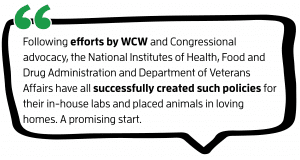 Following efforts by WCW and Congressional advocacy, the National Institutes of Health, Food and Drug Administration and Department of Veterans Affairs have all successfully created such policies for their in-house labs and placed animals in loving homes. A promising start. 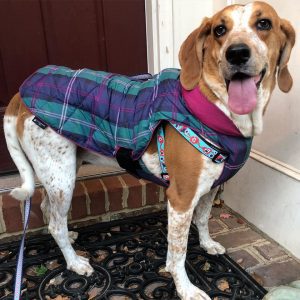 However, adoption must be an option in all of the federal government’s animal labs. The bipartisan, bicameral Violet’s Law (also known as the AFTER Act) would require all agencies that experiment on animals to develop a retirement policy for their healthy survivors. It’s a common-sense, life-saving bill that helps shift power from the administrative state to families — hence its tremendous support from Democratic and Republican members of the House and Senate.

Passing Violet’s Law is simply the right thing to do, both for the animals, who deserve a second chance at happy lives, and for American taxpayers. Until then, our message is clear: Stop the money. Stop the madness!

Mike Bishop represented Michigan’s 8th Congressional District in U.S. Congress from 2015–2019. He previously served in the Michigan House of Representatives and as the majority leader in the Michigan State Senate. Bishop is a volunteer member of the advisory board of non-profit government watchdog group White Coat Waste Project. 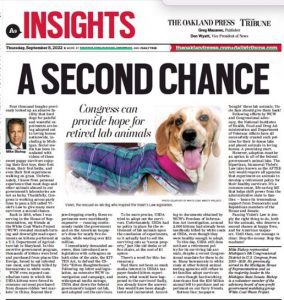 NIH Russia Cat Lab Progress
Coffee…nicotine…sugar…whatever it may be, an addiction is hard to break. And no addiction is harder for the National Institutes of Health (NIH) to break than their addiction to wasteful spending...
1 LikesLeave a comment 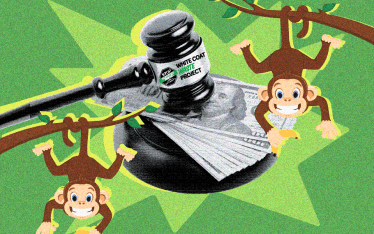