It’s tax season, and CBS News is reporting, “Tax refunds so far this year are down by $6 billion from 2018.”  Taxpayers have a right to know how their missing refunds are instead being spent by Uncle Sam, and White Coat Waste Project’s new ad campaign aims to do just that.

WCW billboard running near the Cleveland VA in conjunction with tax season.

For the next month, WCW’s new billboards will alert taxpayers in Cleveland and Milwaukee that their local Veterans Affairs Medical Centers are two of the last VA facilities in the country still forcing them to pay for puppy abuse. 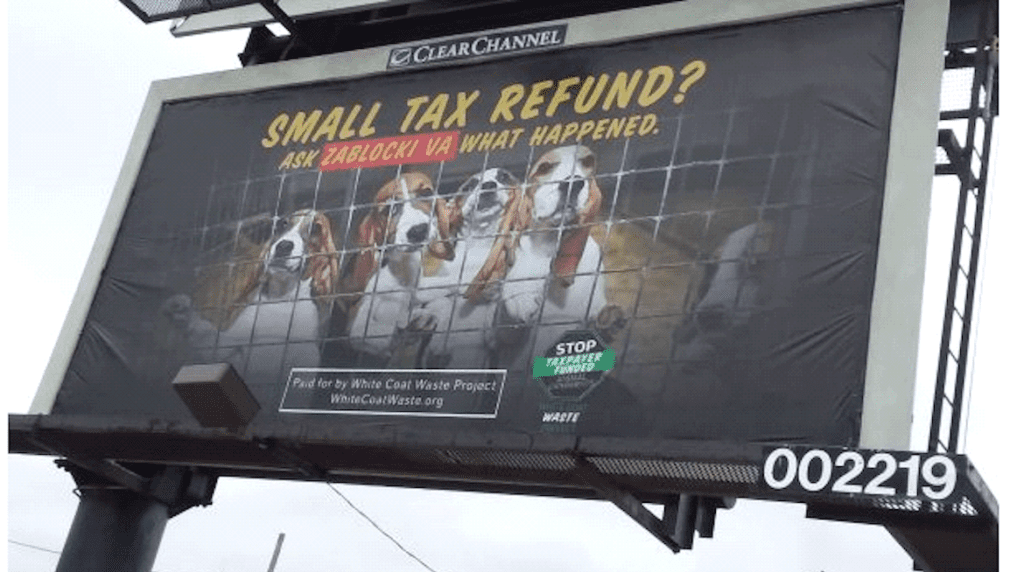 WCW billboard running near the Milwaukee VA in conjunction with tax season.

Additionally, to reach taxpayers who don’t see the billboards in Cleveland and Milwaukee, the WCW TV ad below is running over 1,000 times on cable TV channels–including Fox News, TLC, A&E, NatGeo, Animal Planet, and more–in the cities.

Since 2017, the Cleveland VA has spent nearly half-a-million taxpayer dollars to buy puppies–including “friendly” and “shy” dogs–and damage their spinal cords for invasive and deadly experiments. Documents obtained by WCW show that its most recent shipment of three ill-fated hound puppies arrived in early April.

In Milwaukee, the VA has been drilling into dozens of 6-month-old puppies’ skulls, collapsing their lungs and damaging their brains. Your bill for these wasteful and irrelevant experiments? $357,000 just last year.

Tell Congress you’re fed up with funding this waste and abuse! Urge your Members of Congress to support the bipartisan PUPPERS Act (HR 1155) to permanently cut federal funding for all painful VA dog experiments.

Stop the senseless torture. I work with quadriplegics and ALS patients. These experiments are not only cruel and inhumane but completely a waste of tax dollars for many reasons. A little research will support what I say.

This government can’t help a person going through a rough patch but you can fund this useless suffering. Experiment on politicians!!!

VA in Virginia , The torture that you have inflicted on these “shy” ” friendly, ” dogs IS NOT SCIENCE ! It is evidence of your GREED , SADISM and IGNORANCE . I hope that the terrified screams of pain of these dogs and the thousands of dogs you have murdered haunt you for the rest of your days. CLOSE THAT TORTURE CHAMBER that you call a LAB or volunteer to be a subject in one of your “experiments” No huh ? CLOSE THE LAB and END THE NIGHTMARE FOR THESE DOGS. Release them to a NO -KILL SHELTER NOW !

Omg I had no idea this is horrible.