Over 1.1 million White Coat Waste Project (WCW) advocates have spoken up for our #GiveThemBack campaign and Congress listened!

Proud to introduce the AFTER Act yesterday. All animals who suffer through government testing deserve a loving home, not a death sentence.https://t.co/jv5JwpmQrM

As first reported by CNN, Reps. Brendan Boyle (D-PA) and Jackie Walorski (R-IN) have introduced the Animal Freedom from Testing, Experimentation and Research (AFTER) Act (HR 2897). The bill–which WCW is calling Violet’s Law after the rescued ex-lab dog who inspired it–requires that all federal agencies have policies allowing for the retirement of animals after experiments end in government labs. 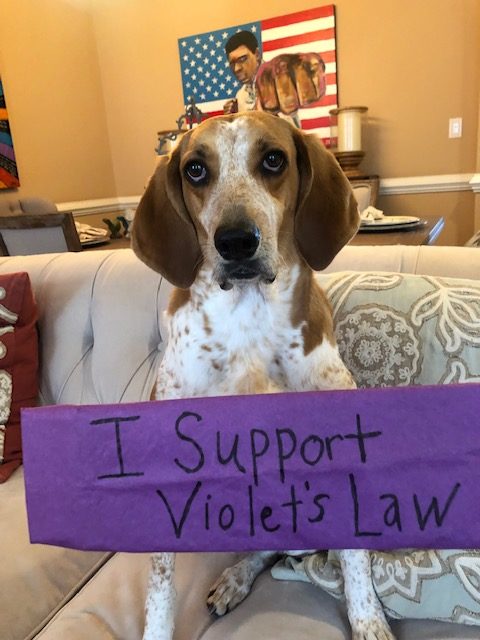 Violet, a hound rescued from a taxpayer-funded lab by a member of the WCW team.

Taxpayers bought these animals and we want Uncle Sam to #GiveThemBack!

Currently, federal government labs experiment on about 50,000 dogs, cats, primates, rabbits and other regulated animals each year (which excludes mice and rats). Virtually all of these animals will be killed, even if they’re healthy at the end of testing.

Of the ten federal agencies that experiment on regulated animals, only one–the Department of Veterans Affairs–has a policy promoting lab animal retirement. The VA policy, which was enacted last year following WCW advocacy that started in 2017, calls the practice an “ethical obligation.”

Yet, other agencies are still lagging behind. Last year, WCW exposed that the USDA killed over 3,000 adoptable kittens in its “kitten slaughterhouse.” Thankfully, the lab was shut down last month following WCW’s campaign and pressure from Congress, and the remaining cats are being adopted out, which is an agency first.

In 2018, we also convinced the FDA to end nicotine addiction tests on monkeys and retire them to a sanctuary. But, the FDA, like the USDA, has no formal policy encouraging or allowing this across the board.

Urge your Congress members to cosponsor Violet’s Law to provide a second chance to animals abused in wasteful government experiments!

Thank you White Coat Waste. This is great news, even though none of this non-science should ever be occurring in the first place. The data from animal experimentation cannot be extrapolated to humans, or even other animals, due to species specificity. The first humans to be subjected to a drug or procedure are the real experiments. The vivisectors know and admit this in their own journals.

So so true. These researchers are true monsters. They just want to see what would happen if….and their sick little minds call it science

All testing is unnecessary is the whole point. They already know that diesel and gas is poison and the chemicals are poison. The poison symbol has been removed from all products. Over the counter iodine used to have the poison symbol. These tests are so unreasonable. I don’t understand how they can keep doing this. The ways they test is so unreasonable. Grinding the skull off and poking wires in the brain. This is satanic. They replace one experiment with another experiment. They have to be stopped. They need prosecuted for being criminally insane.

Please consider these animals feelings and stop unnecessary testing and give these innncoent animals a second chance of life and let us prove to them that not all humans are evil monsters , some of us , love them and want to protect them from the horror going on in test labs.

All these animals labs that people are working in are sick , disgusting , twisted, hatefull, mean and sick from doing horrible agony to little animals who can’t protect themselves, I think you sick people get to enjoy yourselves being so cruel and government allows you to do these insane acts. This is the highest cruelest crime that government allows for sick twisted evil people who are allowed to be this evil by law from the government.

Although of course, ending animal testing altogether is my prayer and goal, supporting Violet’s Law is a great step in the right direction! Please support this bill to end animal suffering!!!

The government has NO RIGHT to use animals for testing & experimenting!

Please stop the experiments and slaughter of these animals!

There is no need to test on animals – if you need to do testing then do it humanly.

This is barbaric, cruel, and inhumane. Let’s not just not kill the ones that are being released from a lab, let’s not have the animal testing labs at all.

Free all animals. This is torture. There are other methods not involving living beings.

What a cruel life these lab animals suffer! They need loving homes.

Please Pass Violets Law. Only thing is these animals are still going to be experimented on, and then release afterwards. A better Law would be to Close all these horrible, cruel labs down NOW…BEFORE they cause them to have heart attacks, and cut animals open again and again. Or put mice in water and watch to see how long it takes to see them DROWN.

Why put poor innocent animals in these horrible labs to begin with, then after years of torture on a daily basis..release them….these horrible people in these labs are forcing a liguid into a dogs veins , causing them to have heart attacks, dogs cut open, sewed up, then cut open again. Running test tubes up monkeys noses. Mice being watched to see how long it takes for them to drown. This is nothing but animal abuse. CLOSE THESE TERRIBLE LABS COMPLETELY DOWN NOW.

Whoever comes up with a mechanical robot to take the place of living animals should get a medal of honor.

There is no excuse to torture and experiment on animals nowadays. There are more accurate and humane ways to test a product.

Please make these labs against the law!!!

Unnecessary experiments on animals is, both, wrong and cruel

It’s a moral and ethical issue for the animals!

The poor innocent animals should never be in labs to be experimented and tortured to begin with. Thank God for small miracles, though. It is my hope that every animal on earth is free from the hands of abuse!

2019 stop testing animals. It is a money maker. Better ways. An improvement. Wonderful. Face it. The pet market is flooded. STOP BREEDING. SPAY NEUTER. STOP ANIMAL USE AND ABUSE. WE ALL LIVE TOGETHER. ALL SPECIES. LETS BE FOR EACH OTHER. KINDNESS MATTERS. THEY ARE GIFTS TO US. LETS TREAT THEM THIS WAY.

Has this law actually been past and now being applied ?

this bill will be approved. We have a president with more compassion than any other (if he was willing to give a second change to criminal Mueller he will be willing to help rescue those animals). Unfortunately ,the media gives no coverage for such a project and I believe that any American citizen, any human being would vote to rescue those animals. Besides no research doing on those animals will give a reliable results, most of those can be done by a variety of means. This cruelty is one more nail on the American land, that is becoming a coffin. We must fight cruelty everywhere and animals and children are one of the most vulnerable victims.

THEY SHOULD STOP ALL TESTING ON ANIMALS. 99% OF IT IS INHUMANE!