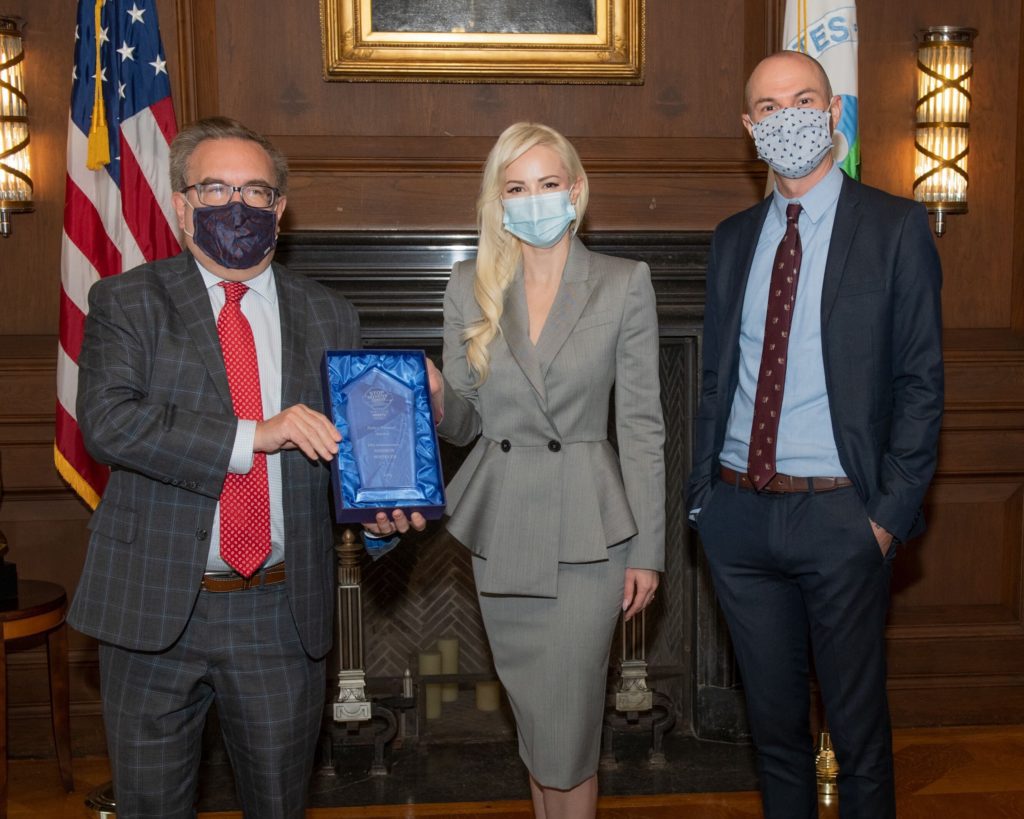 “I want to thank the White Coat Waste Project for this inaugural Policy Pioneer award,” said Administrator Wheeler. “Scientific advances and improvements in technology have made using animals in toxicity tests increasingly unnecessary. EPA is on a path to completely eliminate animal testing by 2035, and I’m happy to have chartered this course with the creation of this policy.”

Our award to Administrator Wheeler was reported on by Federal News Network:

EPA Administrator Andrew Wheeler received an award from an unusual source. Wheeler apparently has a soft spot for critters. A year ago, he signed a directive to start reducing animal testing at the EPA, and five university grants to develop alternate methods to reduce or replace testing on vertebrae. The plan is to eliminate it by 2035. Now Wheeler’s been recognized by a group called the White Coat Waste Project, which opposes animal testing. It gave Wheeler what it calls the Greenbaum Policy Pioneer Award — its first ever.

And (charmingly!) recognized by American Greatness:

A lot of animals, and a lot of taxpayer dollars, will be spared by Administrator Wheeler’s bold plan. A WCW exposé uncovered how tax dollars have historically funded EPA tests on more than 20,000 rabbits, mice and other animals annually that include forcing them to eat lard and then inhale diesel exhaust and smog. These tests cost taxpayers millions of dollars, without producing results that keep humans safer from harmful chemicals.

Ending taxpayer-funded animal testing has been a life-long effort of Administrator Wheeler’s, whose concern for animals runs in the family: he has one sister who is a veterinarian, and another who is a zoologist.

As he told the Washington Post, Administrator Wheeler’s mother discussed “the ethical problems” with animal testing with him when he was young. The lessons stuck.

In 1987, while a student at Case Western Reserve University in Cleveland, Administrator Wheeler wrote a great op-ed for the student paper titled “Animals are not guinea pigs”—in which he argued for a reduction of animal testing, on the grounds that it is unethical to experiment on animals merely to meet government demands.

“The crime comes in the needlessly repeated process which produces information used only by bureaucratic studies,” he wrote. 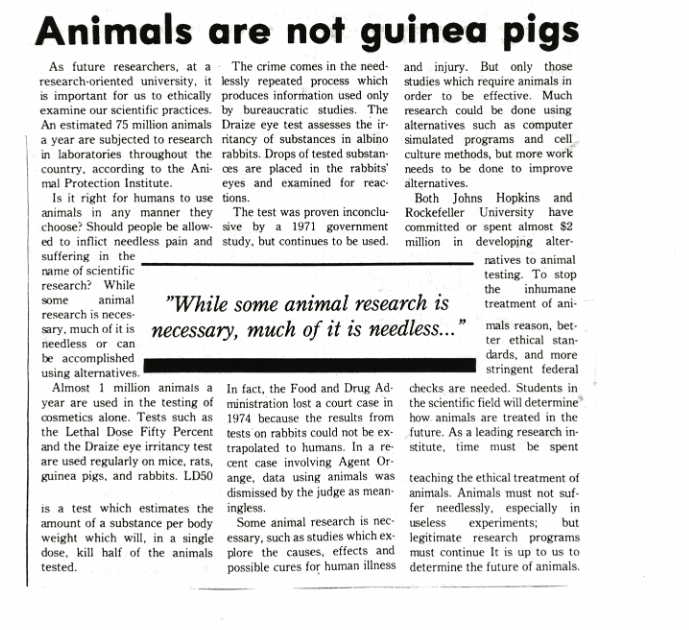 Administrator Wheeler continues to move the EPA toward reducing, and eliminating, required and taxpayer-funded animal testing. About a year after announcing the planned phase-out, he delivered the roadmap for how the agency is going to do it.

And just last week, Wheeler’s EPA announced a proposal to end the burdensome and needless requirement for painful and deadly LD50 tests on rabbits. “LD50” refers to the lethal dose of a chemical at which 50 percent of animals in a study are killed. The test was first developed in 1927, and has been routinely used in toxicity studies since despite being inhumane, expensive, and inaccurate.

This is, in fact, the very test Wheeler criticized as wasteful in his college op-ed.

Administrator Wheeler is the very first to draw this line in the sand from within the federal government—employing sound policy, informed by sound science, and supported by taxpayers and by lawmakers from both sides of the aisle.

We hope and trust that other agencies will follow in his important footsteps, with the path now set to reducing, and eliminating, the $20 billion in taxpayer dollars wasted every year on animal experimentation.

Congratulations, Administrator Wheeler, and thank you from all of us at WCW, and our 3 million members, for your dedication and leadership to ending wasteful and cruel taxpayer-funded animal testing.