The VA is spending your 💰 to buy six-month-old puppies, just to cut out their hearts …and it’s happening in a secretive St. Louis lab.

You are paying for it. But they DON’T want you to know about it.

2019 St. Louis VA invoice for the purchase of 6-month-old puppies for use in deadly heart experiments. Obtained via WCW’s FOIA lawsuit.

According to documents obtained by WCW, after being starved overnight, 32 six-month-old puppies are slated to have inflammatory agents injected into their veins. Then the dogs’ chests are cut open. While still alive, their hearts are removed. The puppies die of “exsanguination”—death from the loss of blood or organs. Their heart tissue is then used for test tube experiments.

Over $300,000 in taxpayer funding has been dedicated to this project since it started experimenting on dogs in 2019. It is currently funded through 2021.

I’ve been working closely with the White Coat Waste Project to expose painful experiments on animals being conducted by the federal government. We have made great progress to make these practices illegal, but we must do more to end them once and for all!https://t.co/SM7rmhviGt

But here’s the thing: for over half a year, the St. Louis VA REFUSED to hand over any of the secret government documents, photographs, veterinary records, puppy invoices, and other key information about the dogs abused in these awful experiments. That’s why WCW–represented by the Law Office of Matthew Strugar–sued.

Shockingly, our investigation even found that prior to our lawsuit, VA staff wanted to blatantly violate federal open records law and ignore WCW’s request for dog testing documents  (taxpayer-funded labs are required to disclose such materials). They even put it in writing! See for yourself below👇🏼 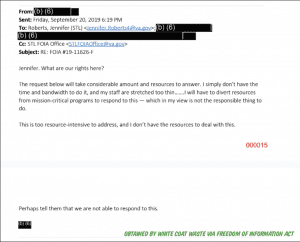 As the St. Louis Post-Dispatch puts it, quoting our VP Justin Goodman:

“If the VA won’t even share the documentation it has that shows whether it has followed the federal guidance, then it simply sends more dogs to their deaths with no public accountability.

If the research is justified, Goodman says, then what is the St. Louis VA hiding?”

A VA Inspector General’s investigation found this summer that the St. Louis VA illegally spent your money to purchase and experiment on puppies.

And these experiments may still be violating federal law.  A WCW-backed federal law enacted last year states that new VA dog testing can only be approved if the “research is directly related to an illness or injury that is combat-related.” These deadly puppy experiments are not.

Don’t worry, we’re not going to let them get away with spending your money to buy dogs and rip out their hearts, then keep what they’re doing a secret.

We’ve just filed ANOTHER federal lawsuit against the St. Louis VA to compel the release of ALL photos and videos of these taxpayer-funded dog tests, like the one below taken by the same experimenters a few years ago.

Photo of a taxpayer-funded St. Louis VA heart experiment on dogs from a recently-published paper. WCW is currently fighting to obtain additional photos and videos of these experiments.

Outraged? Fired up? US TOO.

The good news is we’ve made some historic progress to shut the VA’s dog experiments down. 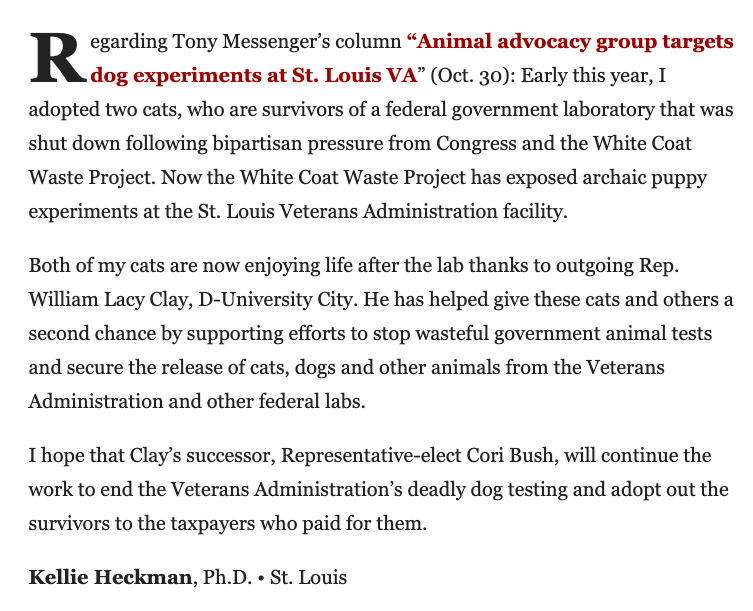 This terrific letter to the editor appeared in the St. Louis Post-Dispatch, following Tony Messenger’s story about our exposé.

Most recently, thanks to WCW’s work with a bipartisan coalition of lawmakers led by Rep. Dina Titus (D-NV) and combat-wounded Army veteran Rep. Brian Mast (R-FL), the U.S. House voted this summer to completely defund ALL dog testing at the VA, including the puppy experiments in St. Louis. We are now awaiting action in the Senate.

You can help! Please take a moment to write your members of Congress and urge them to support the bipartisan PUPPERS Act to permanently cut federal funding for all painful dog experiments at the VA.

Please put an end to federal funding of inhumane & grotesque experiments on live animals. This is unethical & unnecessary.