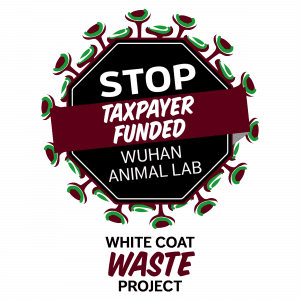 Originally published in the Townhall.

by Justin Goodman and Alexis Baden-Mayer

Dangerous gain-of-function experiments that supercharge viruses to make them deadlier and more contagious to humans are at the center of investigations into the COVID’s origins. Many experts in the scientific and intelligence communities—and a majority of Americans—believe that U.S. taxpayer-funded gain-of-function experiments caused the pandemic through an accidental lab leak.  Fortunately, lawmakers from both sides of the aisle are uniting to crack down on this risky research.

As Rep. Carter said, “We knew the dangers of gain-of-function research, but the National Institute of Health and Dr. Fauci continued to fund it in America and overseas. Evidence continues to mount that COVID-19 originated from the Wuhan Institute of Virology with research funded by U.S. taxpayers. We must double down on our efforts to prevent irresponsible research and protect our communities from future pandemics.”

These concerns aren’t new. Gain-of-function experiments were first paused in 2014 by the federal government because of safety concerns, including fears that they could cause a pandemic, following safety lapses at labs in China and elsewhere.

The result? As Rep. Cuellar said, “Gain-of-function research has been directly linked to the spark of the coronavirus pandemic.”

With our tax dollars, the Wuhan Institute of Virology engineered coronaviruses to be more dangerous in facilities without adequate safety protocols. Recently released documents show that the manipulated coronaviruses in WIV’s animal experiments were 10,000 times stronger than natural viruses. Scientists and even the U.S. State Department have been warning about the risks of this Wuhan lab’s bat coronavirus research for years. Now, because of the NIH’s lax oversight, the gain-of-function experiments it funded may be responsible for the deaths of over 4 million people worldwide.

To stem this scary science, since early 2021 our organizations have been calling on the Biden Administration to reinstate the 2014 moratorium. So far, to no avail. 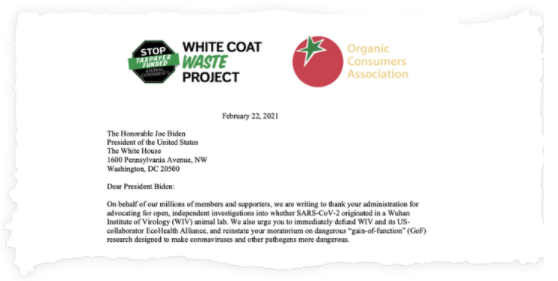 But, this is what Americans want. An April 2021 poll of 1,000 voters by Lincoln Park Strategies found that 55% of them—59% of Republicans, 60% of Democrats and 49% of independents—want to defund gain-of-function research.

Lawmakers are listening. Earlier this year, the Senate passed an important measure led by Senator Rand Paul (R-KY)  to permanently cut funding for gain-of-function experiments in China. And Reps. Cuellar, Carter and Gallagher’s new bill would halt U.S. funding for this research in China, the U.S. and beyond.

Taxpayers should not be forced to fund reckless research that places public health in peril.

Justin Goodman is the vice president of advocacy and public policy at taxpayer watchdog group White Coat Waste Project. Alexis Baden-Mayer is the political director at the Organic Consumers Association.

Fauci’s undercover work torturing these monkeys and dogs is just one of his horrific actions. The Wuhan Lab was another he funded that developed the CV-19 released on the US by the DS cabal and the so called safe vaccine that has killed thousands.

Dr Fauci must be held accountable for torturing ,murdering and torturing all of these helpless animals. Fire Fauci! Carol3@ptd.net

Dr Fauci must be held accountable for these horrible acts on helpless animals. He needs to be fired, charged and convicted.