Congress’ $1.7 trillion omnibus spending bill to keep the government funded contains provisions that will prevent the Pentagon and State Department from funding China’s Wuhan Institute of Virology, considered a possible origin point for the outbreak behind the COVID-19 pandemic.

The spending bill is in the final stages on Capitol Hill and once finished could be signed into law by President Biden as soon as this week.

Critics note that the bill does not block funding by the National Institutes of Health for the Wuhan laboratory where dangerous “gain-of-function” research on making bat viruses more infectious to humans took place before the December 2019 disease outbreak in that city.

The White Coat Waste Project, an advocacy group, lobbied Congress to cut off all federal funding for both the Wuhan Institute of Virology and the U.S. NGO EcoHealth Alliance that has been linked to the institute by Andrew Huff, a former institute vice president who worked in the lab.

Mr. Huff, an infectious disease epidemiologist, told The Washington Times earlier this month that EcoHealth took part in gain-of-function research at the Wuhan Institute of Virology. “I suspected that this was a lab leak from Day One, and as time went on, the information gaps that I had were filled,” he said.

EcoHealth Alliance, which Mr. Huff disclosed also worked with the CIA to spy on China, denied it was engaged in gain-of-function research with the Wuhan Institute of Virology, and Chinese officials strenuously deny the lab played any role in the origin of COVID-19.

In October, Sen. Joni Ernst, an Iowa Republican who opposed federal funding of both the Wuhan Institute and EcoHealth, said the National Science Foundation recently awarded a $1 million grant to EcoHealth Alliance for predictive intelligence for pandemic prevention and that a second grant of over $263,800 was in the works.

“Because EcoHealth broke federal laws, withheld evidence, and conducted dangerous research in unsafe conditions, this group should never be trusted to put its hands on taxpayer dollars or bats ever again,” Ms. Ernst said in a statement on Oct. 11. “Let’s defund EcoHealth and launch a real scientific investigation to find out once and for all what was really happening in Wuhan, China, so the same mistakes are never repeated again.”

Ms. Ernst teamed up with the White Coat Waste Project in initially disclosing federal funding for the Wuhan Institute in 2020. 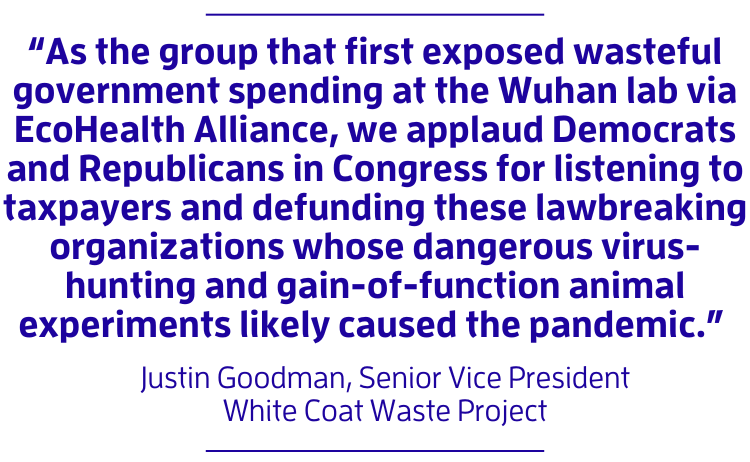 Justin Goodman, senior vice president for advocacy and public policy at the White Coat Waste Project, said the spending bill is not perfect but includes some major victories for his organization.

“As the group that first exposed wasteful government spending at the Wuhan lab via EcoHealth Alliance, we applaud Democrats and Republicans in Congress for listening to taxpayers and defunding these lawbreaking organizations whose dangerous virus-hunting and gain-of-function animal experiments likely caused the pandemic,” Mr. Goodman said in a statement.

“EcoHealth and the Wuhan lab violated a federal ban on gain-of-function experiments, violated transparency laws and policies, and obstructed investigations into COVID’s origins,” he added.

“This bill would start to turn off the spigot,” Mr. Goodman said. “Taxpayers should not be forced to bankroll reckless [research], waste money, abuse animals, break the law, and place public health in peril. Stop the money, stop the madness.”