It’s that time of year. Congress is once again scrambling to keep the government open and funded for another year. The mammoth $1.7 trillion spending bill—aka the “omnibus”—they’re about to enact is far from a perfect proposal but White Coat Waste Project is proud to have secured key victories in the War on Waste that all liberty lovers and animal lovers can celebrate.

Ever since we first exposed and ended taxpayer funding for dangerous gain-of-function (GOF) animal experiments in Wuhan, we’ve been working with Congress and coalition partners to permanently defund animal labs and GOF experiments in adversarial nations like Russia and China.  In June, we worked with the House to pass a bipartisan measure cutting NIH funding for labs in enemy nations. While that full bill didn’t make it into the final omnibus, the year-end spending package does include language defunding dangerous experiments with “pathogens of pandemic potential” in foreign countries of concern, despite the NIH’s shameless efforts to keep funding this waste and abuse. We’re grateful for key leadership on this issue from lawmakers including Reps. Brad Wenstrup (R-OH), Chris Stewart (R-UT), Dave Joyce (R-OH) and Sens. Joni Ernst (R-IA), Rand Paul (R-KY), and Roger Marshall (R-KS).

The omnibus also includes language requested by WCW and led by Rep. Guy Reschenthaler (R-PA) that prevents the Pentagon from shipping taxpayer funds to the Wuhan Institute of Virology specifically! This is a step in the right direction and vitally important because leaked documents show the Wuhan lab sought Pentagon funding for dangerous gain-of-function experiments. We’ll continue our work with Reps. Reschenthaler and others to ensure no agencies—especially the National Institutes of Health—are allowed to funnel tax dollars to animal experiments in Wuhan. 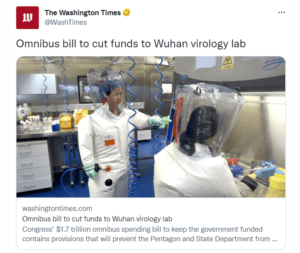 Speaking of Wuhan and GOF, the omnibus also blocks government funds from being wasted to fund projects in China by the infamous EcoHealth Alliance. As we first exposed, this shady group funneled US tax dollars to the Wuhan lab for dangerous animal experiments that likely caused the pandemic, violated a federal ban on GOF research, repeatedly violated transparency law and reporting policies, and actively obstructed investigations into COVID’s origins. Yet, EHA has continued to receive millions of taxpayer dollars just since the pandemic began. Thanks to leadership from Rep. Reschenthaler (R-PA), Sen. Joni Ernst (R-IA), and others this is about to change and we’ll continue working with them to fully defund EcoHealth.

For the fifth year in a row, WCW worked with Congress to include first-of-its-kind language defunding the Department of Veterans Affairs’ experiments on dogs, cats, and primates and directing the agency to phase-out their use by 2025. The legislation is working: We just made history by shutting down the VA’s last painful dog lab and announced the end of the Louisville VA’s deadly cat experiments! Did we mention that WCW is the only organization to shut down any government dog testing labs in 15 years and a government cat lab in the last 40 years? This successful bipartisan effort wouldn’t be possible without the work of Reps. Dina Titus (D-NV), Brian Mast (R-FL), Debbie Wasserman Schultz (D-FL) and John Carter (R-TX), and Sens. Martin Heinrich (D-NM) and John Boozman (R-AR).

Our wins didn’t stop there! The omnibus includes WCW-backed language defunding the Department of cruel and wasteful “live tissue training” (LTT) on animals. In 2019, WCW exposed how the DOJ—specifically the FBI and U.S. Marshals Service—was wasting tax dollars to shoot, stab, and burn live animals to crudely teach personnel medical skills instead of using simulators that government studies prove are more economical and effective. This is the first time in history that government LTT has been defunded, and it’s thanks to WCW lobbying and bold leadership from Reps. Madeleine Dean (D-PA) and Matt Cartwright (D-PA).

For years, we’ve been leading the effort–including Violet’s Law–to ensure federal agencies retire animals when taxpayer-funded experiments end. This year’s spending bill extends our success by directing the U.S. Department of Agriculture (USDA) (one of the last holdouts) to enact a policy allowing taxpayers to adopt animals from its labs. The omnibus also pushes the Food and Drug Administration (FDA) to continue its work—prompted by WCW investigations and lobbying—to reduce primate tests and retire survivors to sanctuaries.

We’re keeping our foot on the gas because in recent years, we have cut FDA’s wasteful primate abuse by a staggering 44% and the FDA has now stated that it’s committed to curbing primate testing! We’re proud to work with Reps. Sanford Bishop (D-GA), Brendan Boyle (D-PA), Ken Calvert (R-CA), Lucille Roybal-Allard (D-CA), and Sens. Susan Collins (R-ME) and Gary Peters (D-MI) on these efforts to save survivors and #GiveTheBack to taxpayers.

A growing majority of taxpayers—Democrats, Republicans, and Independents alike—don’t want to be forced to foot the bill for animal abuse in labs in the U.S. or abroad. On their behalf—with the support of our millions of members, coalition partners, and allies in Congress—we’re making historic progress to find, expose and defund taxpayer-funded animal experiments.