The GAO only undertakes a small fraction of the audits requested but prioritized this one submitted by influential Senators Jeff Flake (R-AZ), Ron Johnson (R-WI), James Lankford (R-OK), John McCain (R-AZ), Rand Paul (R-KY) and Joni Ernst (R-IA).  More details about the original request are posted below. This is the second GAO audit prompted by a WCW investigation in just the past 90 days. 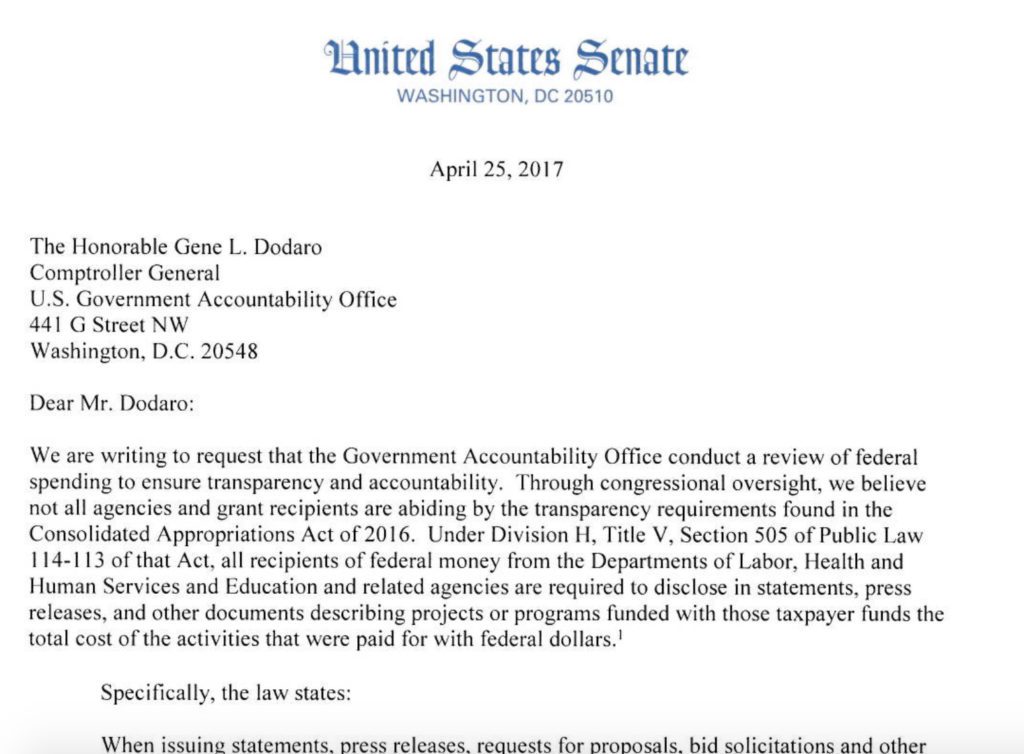 Washington Times, Politico and others are reporting that today, Senators Jeff Flake (R-AZ), Ron Johnson (R-WI), James Lankford (R-OK), John McCain (R-AZ), and Rand Paul (R-KY) sent a letter to the Government Accountability Office (GAO) requesting an investigation into the causes and extent of the spending transparency problems documented by their offices and in WCW’s Ivy League Flunkers report. In their letter to the GAO, the Senators write:

Unfortunately, Congressional oversight has shown that many recipients of federal funds are not complying with this longstanding taxpayer transparency law. We have found most of the documents and statements issued by the recipients of federal funds from these departments reviewed by our offices did not disclose the costs. In some cases, neither the funding agency nor the recipient could or would provide this information when asked.

We believe it is unacceptable for agencies and grant recipients to disregard longstanding transparency requirements, and those agencies have an obligation to spend taxpayer dollars effectively and efficiently.

These Senators are the leaders on efforts to expose and cut government waste. Recently, Sen. Flake has authored the influential Wastebook, Sen. Lankford released his hard-hitting Federal Fumbles report, Sen. McCain published the jaw-dropping America’s Most Wasted, and Sen. Paul has released important editions of his Waste Report. Sen. Johnson is chairman of the Senate’s powerful government oversight committee and a champion of critical legislation like the Bolster Accountability to Drive Government Efficiency and Reform (BADGER) Washington Act to cut government waste, fraud and abuse.

With widespread bipartisan public support and leadership from these powerful lawmakers, we’re optimistic about our ongoing efforts to increase transparency and accountability about wasteful taxpayer-funded animal experiments.

[…] the White Coat Waste Project to stop taxpayer-funded animal experiments. The dynamic WCW team just secured its second federal audit in 90 days on NIH-funded animal testing, successfully working with some of the most influential […]

POLL: 75% of Taxpayers Want Wuhan Animal Lab Funder Subpoenaed to Testify Before Congress
We’ve told you about the how the notorious non-profit group EcoHealth Alliance funneled tax dollars to the Wuhan Animal Lab for dangerous coronavirus experiments on animals that many experts—and a...
LikesLeave a comment

WCW LAWSUIT VICTORY: USDA Sold Lab Cat Survivors For $1 as “Excess Property”
Back in 2019, WCW got the USDA to retire and release the feline survivors of its $22 million “Kitten Slaughterhouse” lab. This was the first time we know of that...
1 Likes2 Comment(s)

U.S. House Re-Introduces Violet’s Law to Make Adoption An Option for Lab Animals
Momentum keeps building to give animals in government labs a second chance. Following WCW’s campaign and action by the U.S. Senate, the U.S House of Representatives just reintroduced the AFTER Act,...
Likes4 Comment(s)