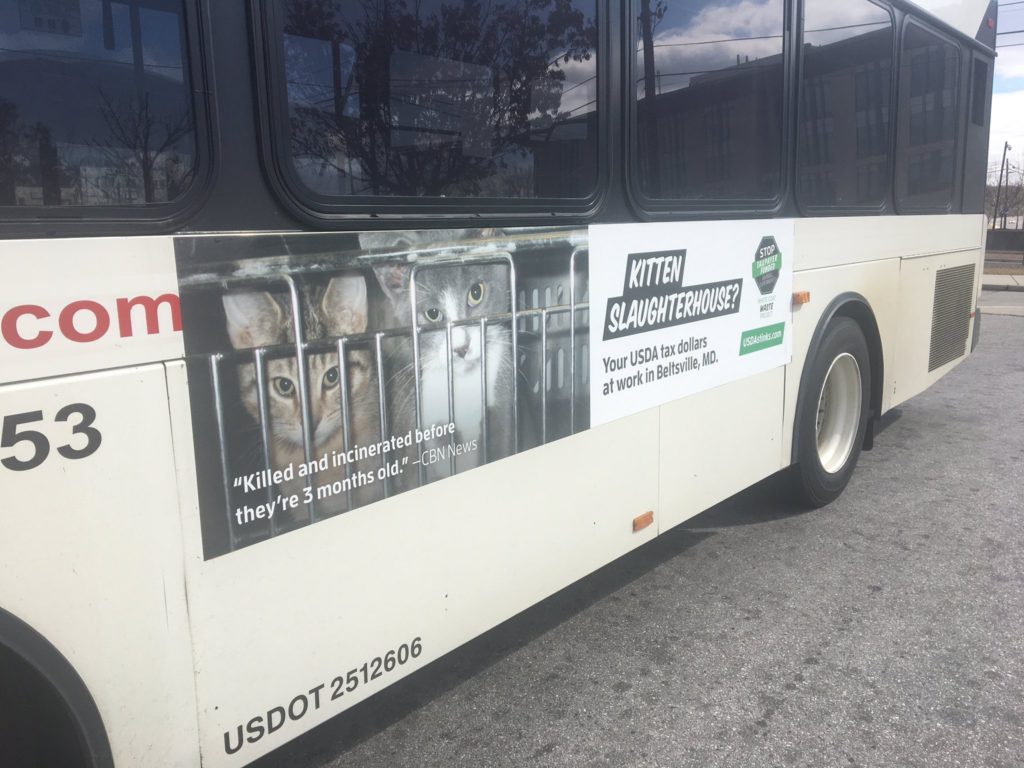 Following a successful free speech lawsuit filed by White Coat Waste Project, the Maryland Transportation Administration (MTA) is running eye-opening WCW ads exposing the U.S. Department of Agriculture’s (USDA) deadly kitten testing laboratory in Beltsville, MD. The archaic experiments involve breeding up to 100 kittens a year, feeding them parasite-infected raw meat, collecting their stool for two weeks, and then killing them at 3-months-old even though they’re healthy and adoptable. Since 1982, the project has wasted over $22 million in tax money and 3,000 kittens’ lives.

As first reported by ABC affiliate WJLA, for the next month thousands of bus and train riders who live and work in the Beltsville, Maryland area will see these WCW ads during their commute: 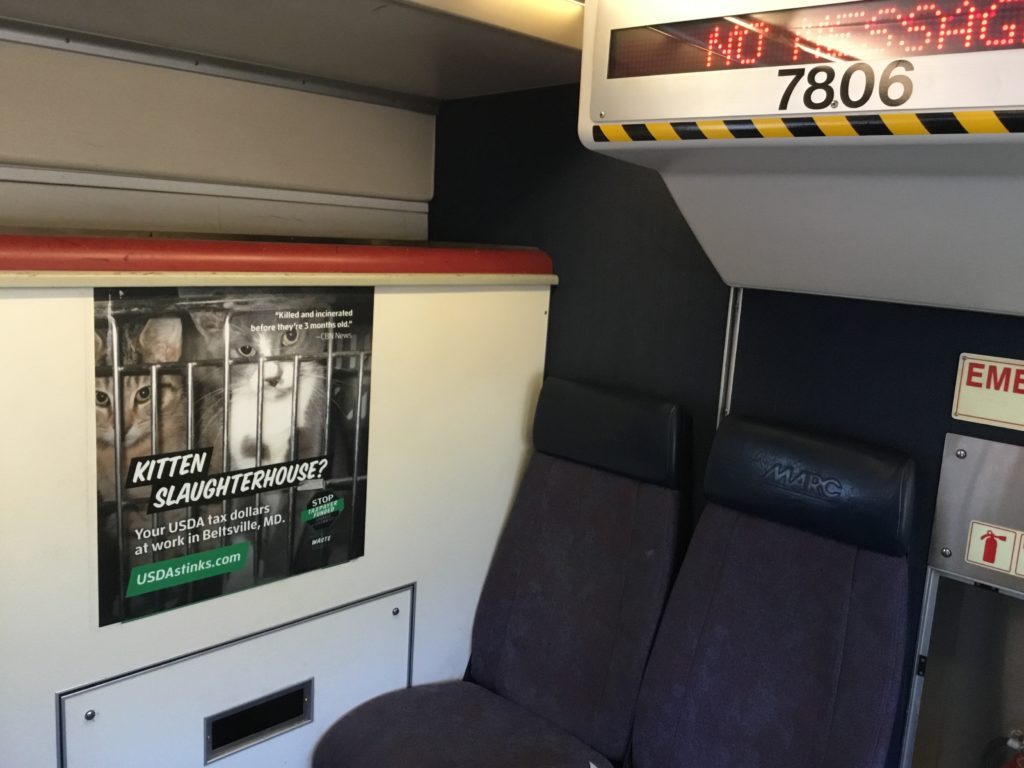 The ads were first unlawfully denied by the MTA on the grounds that they were “objectionable,” “controversial” and that they depicted “violence.” The state agreed to run the ads after WCW filed a lawsuit alleging that the denial violated the First Amendment. 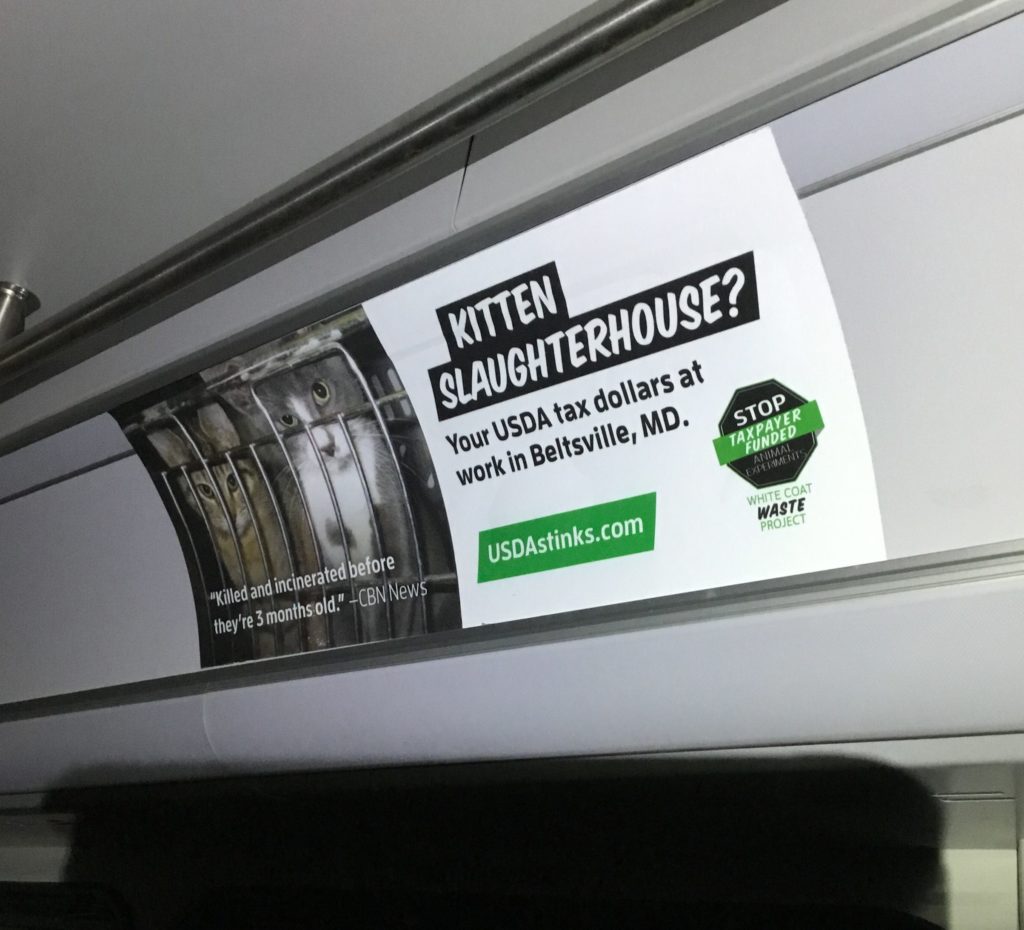 These animals are kidnapped against their will and tortured. These lunatics need to be in jail. No different than a serial killer or sadistic monster.

I hope you will shut it down. As a doctor, part of the highest tax bracket, I don’t agree with my tax money contributing to the killing of innocent animals

Stop this immediately ! How is this ok with the tax payers?!?!?

I will protect these precious baby animals; horrendous to put them through this horrible experimentation, just to kill them horribly after they’ve already suffered so much pain from thoughtless humans!

Sooook sick,but I’ve always known our government and most of the people that work in it are sick.bits a proven fact harming g animals is a precursor to abuse of ALL forms. These people that work in these place should be branded so that people knw who they are. They truly are no better than serial killers and they do it legally with our tax dollars. I would rather die than be cured from and experiment on animals to help us. Tbey are the purist form of life. In the wild they kill for food! It’s a instinct thing. But this…. these humans are not even human in my eyes. We are over populated on this world as it is. Let nature be nature. I feel anyways all our deasese in our word is manufactured from our governments an parmixutical company’s anyways. They both goverment and parmicutical should be MAJORLY reformed. Sick,sick sick. I HATE most of our government and what it stands for,this is lead by example!!??? STOP this cruelty!!!!

To what end are these so-called “experiment “being performed? Everybody knows that every animal who eats parasite infested meat usually get parasites. So what are these madmen trying to glean from doing this other than pure sadistic joy. As a physician, I also am in a high tax bracket and do not want to see my tax money wasted on the torture of innocent animals.

It says alot how we treat others. Why don’t they experiment on themselves ? ..walk the walk ?
What a typical business attitude , externalization of negative effects, and accountability. And then people wonder why the world has been going to sh*t , the system doesn’t have any morals at all . As low as you can go seems to be the standard . And then just as one thinks they can’t go any lower they start digging.

So evil. It seems there isn’t even any good coming from all the cruelty and waste of money. I think they should be made to explain the why’s and how’s of what has been going on. Maybe they can at least give a good reason.

I’m withholding a portion of what I owe the feds for income tax refusing to pay “my share” to support this. RISE UP

Disgusting, brutal, amoral, barbarians who do ANYTHING to hurt ANY AND ALL HELPLESS ANIMALS! These criminals who do these types of horrors to innocent, and loving, loyal animals should have the same things done to themselves! They are PSYCHOPATHS!!!!!!!!!!!!

Stop this inhumane action. These people should go straight to hell

they will meet their maker and God will be the judge God sees all that has been done to His loving animals, they are monsters.

I don’t wish bad on anyone , but what they did to these innocent little kittens is the most horrible thing I can even digest or think about, and I know that consequences always follow. And the good Lord , it is in His hands, I cry and get sick , knowing this is still going on and now they are torturing more kittens by snapping their spines, what kind of a person does that, a evil ,, doing the devils work., this is why we have the corona virus, because all this torture of the animals, and not obeying God and turning to Him and being good people, and the government, a bunch of creeps, and these white coats, no good bastards, I shouldn’t curse I am a christian but that is what they are , they are lower than low … sicker than sick… innocent little kittens, they are now breaking their spines,,,, there will be more virus’s coming , more evil, more problems, because people keep doing this horror.