UPDATE (12/17/19): This bill was signed into law in December 2019 and the FDA’s plan to reduce primate testing and retirement primates to sanctuaries is due to Congress within 12 months.

Last year, WCW ended wasteful $5.5 million nicotine addiction experiments on monkeys at the Food and Drug Administration (FDA).  Now, thanks to WCW, lawmakers, and the majority of Americans that oppose this waste and abuse, Congress is taking action to end all taxpayer-funded primate testing at the FDA.

This monkey, pictured in a now-defunct FDA nicotine testing lab, was retired to sanctuary after a WCW campaign led to the cancellation of the experiments.

The U.S. House Appropriations Committee just passed its 2020 FDA spending bill, which includes language (see page 80) directing the FDA to formalize a plan for the reduction and replacement of its primate experiments, and the primates’ retirement to sanctuaries.

Spoke in support of the FY20 Agriculture Approps bill! I fought for bill language to strengthen support for nutrition & public health, to prohibit commercial horse slaughter, and to direct the FDA to reduce nonhuman primates in research and retire them to sanctuary. @AppropsDems pic.twitter.com/DOSlTsRaO5 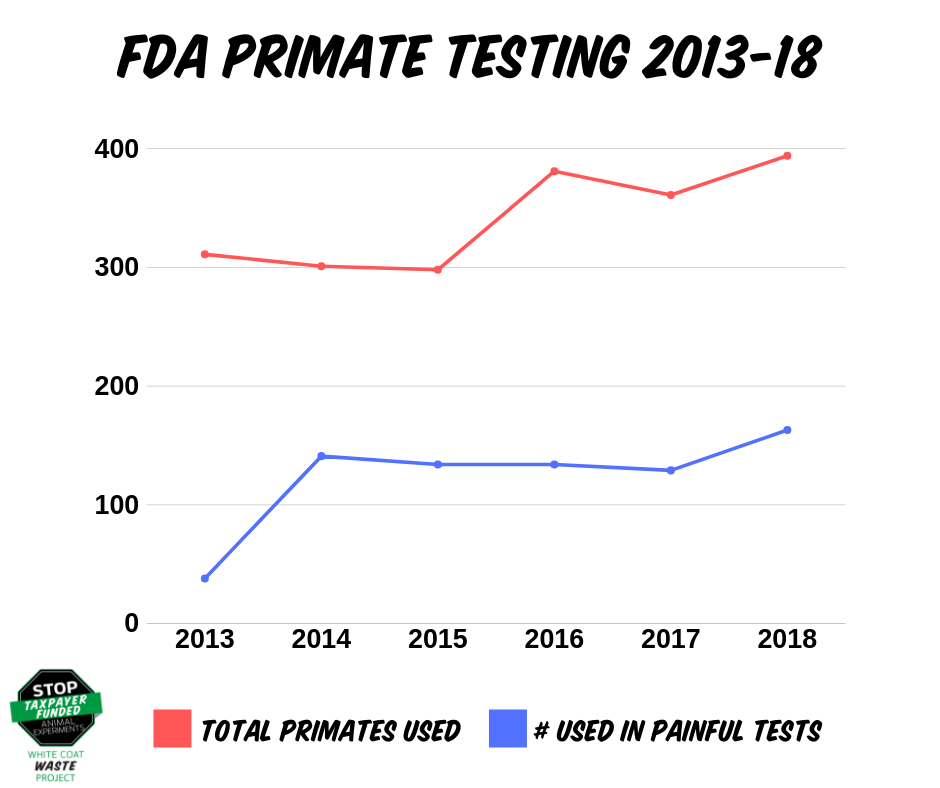 Join the fight! Take a moment to urge the FDA and other agencies to end taxpayer-funded primate testing!

Let’s put a stop to the wasteful projects on animals and the pain we inflict upon them.
Thanks,
Phil

SOME PROGRESS, THANKFUL FOR THAT. NOW LET’S STOP THE WASTEFUL AND USELESS “TESTING” FOR GOOD.

MAY GOD BLESS THEM ALL.

Please stop experiments on primates. It is just wrong. Do the right thing!!
Thank you for your time.
Peggy Carlson

Stop ‘torturing’ helpless animals for senseless experiments to justify your scientific research, no human or creature can ever benefit from.

Please do everything you can do to end animal cruelty.

As I type this, there are tears and so much emotion. I cannot say thank you enough. Thank you for giving these sentient beings a chance to be free from these wasteful tests and cruelty.

I hope these poor creatures get the protection they deserve. They are sentient beings and it should be illegal to use them in labs.

OMG I beg you please have a heart, I can’t stand the thought of the unGODly horror and misery they are put through. PLEASE HAVE A HEART.

Time For A Change Of Heart!

Please do what is right and end all animal testing once and for all.

please follow through on this and retire all of these animals to an accredited sanctuary and end all animal testing now.