UPDATE (4/28/20): The Trump Administration has officially cut funding for animal experiments at the Wuhan Institute of Virology and requested that over $300,000 0f remaining 2020 taxpayer funds be returned.

Original post (4/13/20)As if forcing taxpayers to fund China’s “wet markets” wasn’t bad enough, we’ve now exposed that the federal government has been sending your money to a controversial bio-agent lab in Wuhan, China, that used it to conduct dangerous coronavirus experiments on animals.

There is zero doubt that the Chinese communist government has American blood on its hands. The NIH must immediately stop deploying American tax dollars to China for this dangerous research. https://t.co/skkRQ6DpBa

You Are Paying for Animal Abuse in Wuhan, China

We just exposed how the National Institutes for Health (NIH) has spent millions of tax dollars funding dangerous coronavirus animal tests at the controversial Wuhan Institute of Virology, where there’s no real accountability or transparency to the American public. What’s worse: the WIV is still authorized to receive even more of your money.

Our analysis of government spending databases and other sources revealed recent taxpayer-funded animal tests at the WIV including coronavirus-infected bats being captured in caves and experimented on, coronavirus being grown in labs and injected into piglets, and animals having holes drilled into their heads and being electroshocked. A US-based non-profit called EcoHealth Alliance funneled the NIH funding to the Wuhan animal lab’s coronavirus experiments.

A shocking Washington Post report that followed our exposé indicates that U.S. State Department officials sounded the alarm in 2018 about the potential for a pandemic specifically related to these kinds of dangerous coronavirus experiments at WIV. 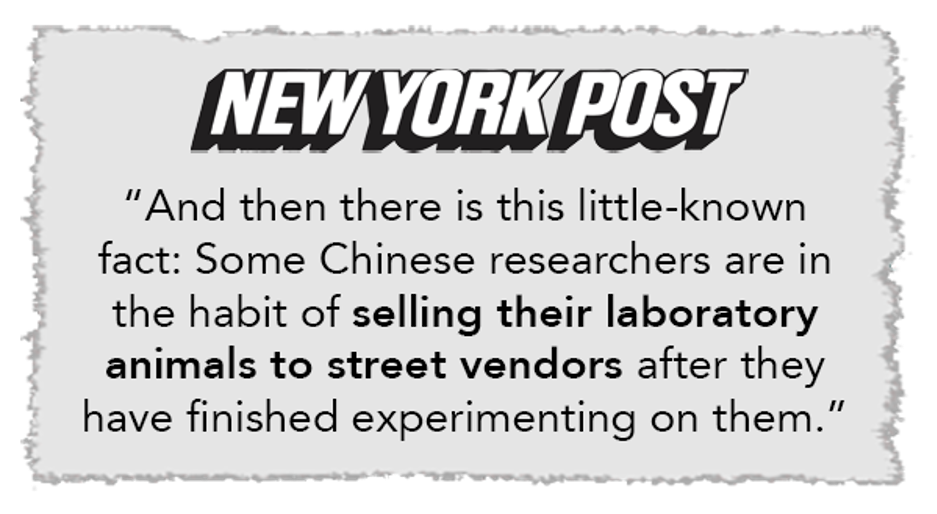 Making this already unacceptable situation worse, animals infected with viruses or otherwise sickened and abused in Chinese labs reportedly may be sold to wet markets for consumption once experiments are done.

Tell the Government to Stop Using Your Tax Dollars in This Wasteful, Dangerous Way

We are continuing to investigate the gory details, and we will share them with you as they emerge.

Taxpayers should never be forced to bankroll dangerous animal abuse in foreign countries and we’ll continue to work with Congress to put an end to this egregious misuse of Americans’ tax dollars.

This is not right. I did not approve this horrible decision

This is sick and discussing, how life is treated disrespectfully, like no other living thing has feelings. Anyone who does these experiments, are mentally disturbed, and are the same people that can do the same thing to humans. Such ignorance, you all should be put in a mental institution. You are stupid idiots. How would you like it, if that was done to you? Visualize that you ugly, disgusting, shit.

This is not acceptable and a waste of good money, why are we paying people to abuse animals? It should be a crime,

This is why humanity will be extinct too. Humans creating viruses to kill.

Stop wasting taxpayer money with impunity. Stop the evil acts of humans upon other beings/species.

I DO NOT WANT MY TAX DOLLARS SPENT ON ANIMAL TESTING!!!! Please stop these horrible experiments! God bless these precious creatures!

These people are sick and evil to torture these innocent animals!! Thinking that by torturing them before they kill them the meat will do something to their bodies- how dumb can they be!!

Stop the waste & the horror!