UPDATED 6/15/21: Following WCW’s exposé of EcoHealth Alliance’s failure to disclose how much taxpayer money it shipped to the Wuhan animal lab–a violation of federal spending transparency law–a government watchdog has launched an investigation.

A federal watchdog has opened an investigation into the National Institutes of Health’s grant program amid the ongoing controversy over funds being sent to the Wuhan Institute of Virology#NextRevFNC @SteveHiltonx https://t.co/ZV5USUksyj

Thanks @SenJoniErnst for commitment to protecting taxpayer funding! @WhiteCoatWaste has also always been a leader on this issue, and such commitment, especially when it comes to bipartisanship, is admirable. It’s a pleasure to cover for @townhallcom! https://t.co/bKhjm1XK98

You know EcoHealth Alliance. They’re the shameless, shady U.S. organization that WCW exposed for taking your money, then funneling it to the Wuhan Animal Lab for dangerous, cruel coronavirus experiments on animals that might have caused the COVID-19 pandemic.

But despite how many taxpayer dollars EcoHealth has grabbed—a whopping $15 million just from the NIH since 2002 and over $100 million in total from federal agencies—and how much they’ve put your life at risk… we’ve now uncovered that those greedy sneaks think they’re above telling you what they’re up to with YOUR cash.

⚖️ Too bad for them federal law says otherwise. ⚖️

A complaint was filed Monday accusing a U.S. nonprofit with close ties to the Wuhan Institute of Virology of chronic violations of the Stevens Amendment.

The complaint called the NIH to permanently disqualify the group from receiving future funding. https://t.co/Ry8QUAostP

WCW and Congress aren’t letting this reckless rogue lab get away with these illegal shenanigans.

As first reported by the Daily Caller, today, White Coat Waste Project filed a complaint with the National Institutes of Health demanding that it investigate EcoHealth Alliance’s repeated violations of a federal spending transparency law called the Stevens Amendment.

We’ve documented that EcoHealth has broken the law over and over again by not publicly disclosing how much of your money it shipped to dangerous coronavirus experiments at the Wuhan animal lab, and other risky projects. You can see it all for yourself right here. 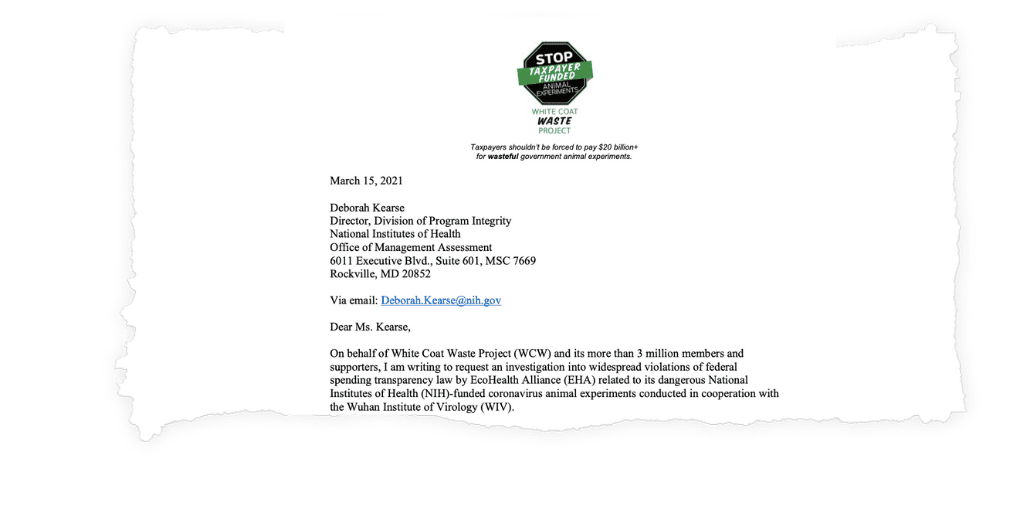 Waste Warrior Sen. Joni Ernst (R-IA)—who has been working with WCW since last year to defund the Wuhan Animal Lab—is also leading the charge on Capitol Hill to hold EcoHealth and other rogue labs accountable for violating this federal transparency law.

There’s no reason Iowa taxpayers should continue to foot the bill for organizations that fail to follow federal laws—particularly one that could hold answers to the origins of the COVID-19 pandemic like EcoHealth Alliance. https://t.co/uan9bBpL7Y

As the Daily Caller wrote, “Sen. Joni Ernst told the DCNF that she will demand an investigation into the federal government’s failure to enforce the Stevens Amendment in light of the revelations in the White Coat Waste Project’s letter.”

Here’s her new letter to the Department of Health and Human Services Inspector General.

A US nonprofit with close ties to the #Wuhan Institute of Virology violated federal law by failing to disclose that taxpayer funds supported its work, according to a complaint a taxpayer watchdog group filed on Monday. https://t.co/bAhHtaSe2U

It’s not right for animal experimenters to dip their hands in your pocket then pull the wool over your eyes about what they’re doing with your money.

As EcoHealth’s perilous illegal spending shows, it’s also simply not safe. We’re calling on the NIH to defund them for good.

You can help! Please sign our petition telling Congress you want them to pass the Cost Openness and Spending Transparency Act–recently re-introduced by Sen. Joni Ernst (R-IA) and Rep. Ralph Norman (R-SC)–to require all taxpayer-funded animal experimenters to publicly disclose the cost of their wasteful projects, and cut labs’ money if they don’t comply!

Stop wasting taxpayers dollars in horrendous labs that unnecessarily experiment with animals or in labs like the one in Wuhan that has caused a pandemic. We shouldn’t be funding animal and human destruction.

using ANIMALS for cruel research experiments is UNACCEPTABLE! I am appalled that my hard earned tax dollars are supporting animal vivisection (something that I completely oppose!) In addition to a pandemic that started due to inter-relations with humans and animals!!!! This needs to end NOW! No more animal’s used for any kind of research!!!! They are not OURS!!!!! Humans are the ignorant ones……USE NON_ANIMAL RESEARCH METHODS INSTEAD….this is a NO BRAINER!

animal testing should be obsolete. why is some company still pigging out at the federal trough?

Defund the Chinese Wuhan Lab!! Stop using innocent animals for your cruel experiments!! With today’s technology it is totally unnecessary and it’s totally inhumane!! We’re better than this!!