MARCH 2022: After White Coat Waste Project (WCW) revealed that over $700,000 of U.S. taxpayer money was being shipped to Kremlin-run labs in Russia (and used to torture cats), the Government Accountability Office (GAO) confirmed to the Washington Times that it accepted Congress’s request for an audit of Worldwide Waste at the National Institutes of Health (NIH). We eagerly look forward to the report!

ORIGINAL POST (NOVEMBER, 2021): In our recent report “Worldwide Waste,” WCW revealed that the National Institutes of Health wastes around $140 million per year of taxpayer money on international animal experiments — despite a bipartisan majority of Americans opposing this (mis)use of their tax dollars.

We’ve mentioned some of these beyond-the-border boondoggles before, including addicting zebrafish to nicotine and ecstasy, training mice to binge drink, and, of course, dangerous coronavirus gain-of-function experiments in Wuhan.

Our report mentioned that it was difficult to get precise data from the NIH on how many animal experiments were funded overseas and how much was spent due to their poor reporting — but thanks to a new letter from Congress, that may soon be on the verge of changing.

It’s important that the letter–which cites our Worldwide Waste investigation–was sent to the GAO, rather than the NIH itself. It seems like Congress is tired of being given the runaround — and so are we. 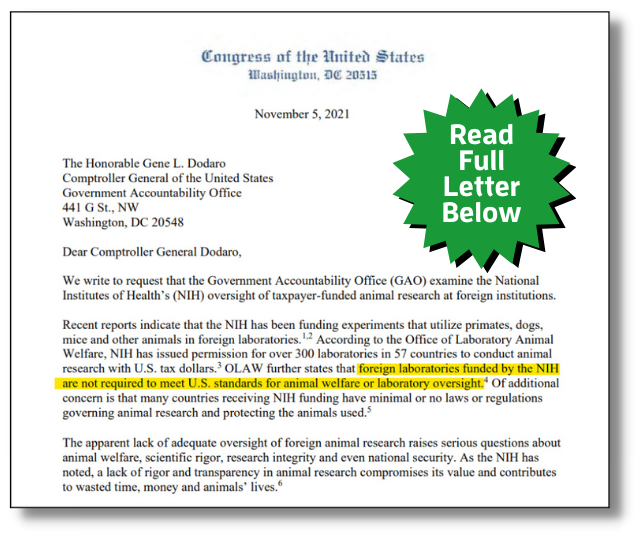 The letter notes that “foreign laboratories funded by the NIH are not required to meet U.S. standards for animal welfare or laboratory oversight” — something we find VERY concerning, too.

It goes on to say that the “apparent lack of adequate oversight of foreign animal research raises serious questions about animal welfare, scientific rigor, research integrity and even national security. As the NIH has noted, a lack of rigor and transparency in animal research compromises its value and contributes to wasted time, money and animals’ lives.”

It’s what we’ve been saying for years!

The letter demands extensive information into the scale and the scope of the NIH-funded foreign animal experiments. Among other questions, it asks:

A few years ago, very few people in Congress were talking about wasteful animal tests by international white coats. What changed? Well, a global pandemic certainly has a way of making people reevaluate their priorities…especially when it seems increasingly likely that the pandemic could have been sparked by dangerous gain-of-function research on bats and mice in Wuhan.

We’re grateful for the leadership of Reps. Roybal-Allard, Mast, Blumenauer and the other Members of Congress who signed the letter.

While Congress is waiting for answers, take action! Tell the NIH to stop shipping your tax dollars overseas for animal experiments!