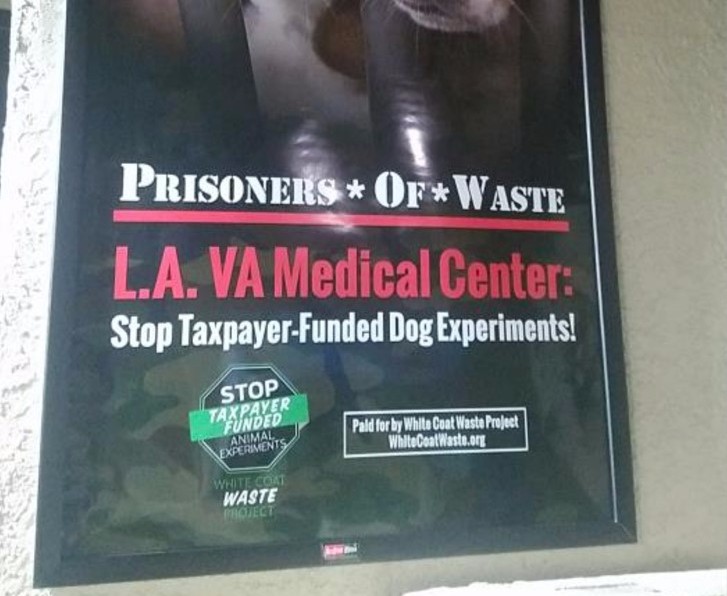 As the LA Times, Roll Call, Washington Times, Stars and Stripes, POLITICO and others are reporting, documents recently obtained by WCW through a Freedom of Information Act (FOIA) request reveal for the first time that the Greater Los Angeles VA Healthcare System (Greater LA VA) is conducting secretive and deadly experiments on dogs.

At the facility, dozens of Dobermans are being bred to suffer from narcolepsy, a sleep disorder involving excessive sleepiness and falling asleep suddenly. The dogs are injected with methamphetamines or antidepressants for as long as six months and then killed so their brains can be cut out and dissected.

This continues to be approved, funded and conducted by the VA even though the experimenters acknowledge in their application for the project that, “the underlying cause for narcolepsy in humans is different from that in dogs.”

We’ve shared the troubling documents with members of Congress, who now want to know why its so hard to find any public information about this taxpayer-funded experiment.

Thanks to @WhiteCoatWaste for helping me & my colleagues expose how the LA VA drugged & killed dogs in experiments. https://t.co/EiCXmMiNE9

In their letter to the VA, the nine Congress members write that the Greater LA VA Doberman experiment’s “details are alarming,” and challenge what they characterize as “misleading statements” and a “lack of transparency and accountability.”  They go on to write that, “Taxpayers deserve to know how their money is being spent.”

It’s critical that outraged Americans make their voices heard through legal and peaceful protests only, and the most effective way to do that is contacting Congress.

I held a leadership position there years ago in the Animal Research Dept’s. but was fired as a whistle blower. While the dogs are treated extremely well. The facilities are run down disgusting with little to no security.

Show some compassion. Animals are our companions and are fully sentient beings. Give them the respect they deserve. They were not put on earth to have you do horrific experiments on them.

Stop the cruelty killings of these poor animals immediately,

This is a totally waste of money. And dogs are no way like us.

I tend agree with Nancy, animals are our companions are fully sentient beings. (This has been scientifically researched & proven over and over that our animals i.e. dogs for example are sentient beings) & when you do anything so horrific to a sentient being, you should be held liable under the eyes of the government & Jesus Christ our Lord and Savior. Our animals were not put on this earth for us to do these horrific experimental & might I had ludicrous as well. Can you tell me one good reason why we need to know if a narcoleptic dog responds to methamphetamines? Even more so, for over 30 years Texas A & M has been breeding dogs with cerebral palsy just to see if they can find something to cure that. 30 years. Overwhelmingly & exacerbating only ridiculous! These dogs cannot even stand on their own, constantly drool & are fed only gruel. I call for one, can’t wait until they go in front of God’s eyes & God will look through them & see all the evil doing they have been done over the years time and time again with no results. Thank you for your time & listening Betty U.

How Can I adopt one of these dogs? I live in Santa Monica. A thank you. rc

Makes me “sick”. Do something about it. Man’s “best friend” should not suffer such abuse! It should be a crime. Many animals are better friends to people than people are. To some it is an only friend.