💥 More than 110,000 White Coat Waste Project supporters so far have signed our petition demanding the Food and Drug Administration abolish its wasteful and cruel dog testing mandate! And in July, powerful Republicans and Democrats in the House of Representatives sent a strongly worded letter to the FDA, writing that getting rid of the dog testing demand would “save time, money and dogs, and accelerate medical innovation.”

In the letter, which you can read in full here, the Senators write, “we encourage FDA to prioritize finding alternatives to drug testing on dogs.” 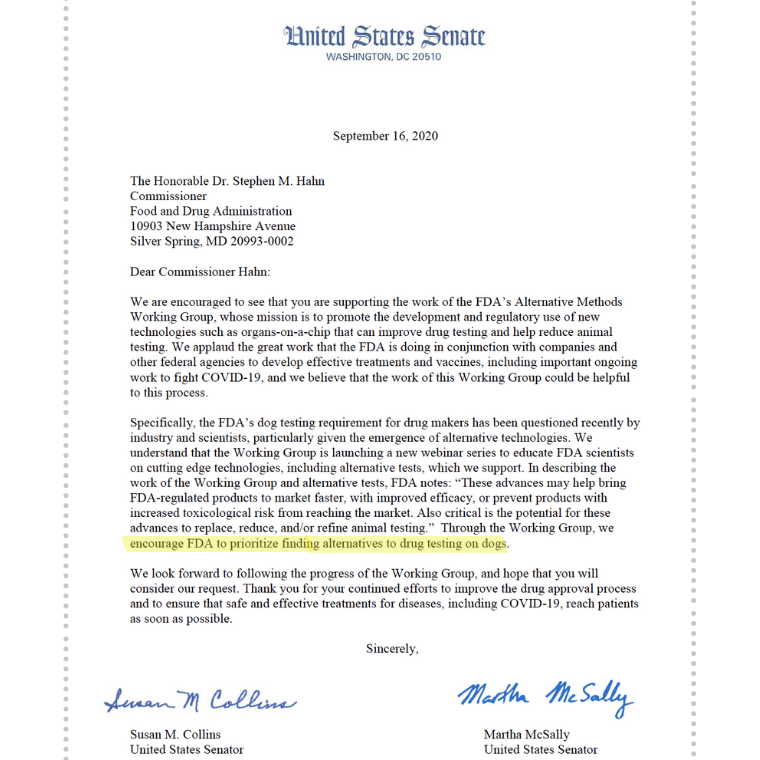 They go on to praise Commissioner Hahn for his support of the FDA’s Alternative Methods Working Group and its efforts to reduce animal testing—including with the development and regulation of new technologies like “organs-on-chips” that do not rely on animal models for drug testing.

This great letter follows some 🔥🔥🔥 movement since we launched our Cut FDA Red Tape coalition in June!

💥  Also coming from Congress 💥  : The Food and Drug Administration’s House funding panel and full House Appropriations Committee unanimously passed their 2021 FDA funding bill, including a WCW-backed measure directing the agency to issue a report on how drug makers can avoid wasteful, slow, and costly dog testing mandates in favor of more efficient and effective alternatives, and to revise its outdated and burdensome regulations.

The measure passed the full House in July, and now goes on to the Senate.

We are thrilled our campaign is gaining so much traction, so quickly, and we can’t wait to share more exciting developments with you soon.

Thank you, so much, to Sen. Collins and McSally (who also introduced Violet’s Law!) for your leadership on this utterly critical issue—the urgency of which is especially acute right now, as the FDA’s dog testing mandate is a pointless bureaucratic hurdle standing in the way of a search for the COVID-19 treatments we so desperately need.

You can help! Please join our Cut FDA Red Tape coalition by signing our action alert to tell lawmakers you want to cut FDA red tape to spare dogs, stop waste, and save lives!

If you want to test, do it to yourself.