🔥  Congress is demanding an investigation of the National Institutes of Health, following WCW’s blockbuster exposé that the Wuhan animal lab which may have caused the COVID-19 pandemic, is still eligible to get taxpayer dollars from the NIH. 🔥

Today, in response to WCW’s ⚡shocking revelations⚡, 28 members of Congress led by Rep. Scott Perry (R-PA) dispatched a letter to the U.S. Dept. of Health and Human Services’ Inspector General demanding a “prompt and thorough investigation” into the NIH’s relationship with the Wuhan Institute of Virology. 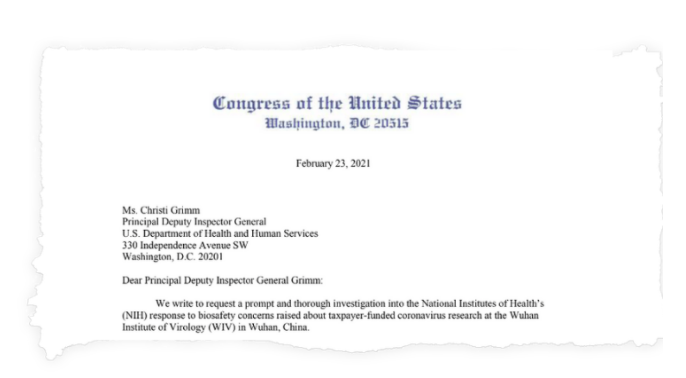 You can read the letter in full here.

Specifically, the lawmakers want a probe of NIH’s funding of WIV’s treacherous coronavirus experiments on animals and its response to the serious biosafety concerns raised about China’s state-run animal lab over the past several years… including a little thing like whether the COVID-19 virus which has roiled our health, economy, and lives for almost a year now, leaked from this very lab.

The Wuhan animal lab was using taxpayer dollars for extremely dangerous “gain of function” coronavirus experiments, aimed at “supercharging” viruses to make them as contagious and deadly to humans as possible and injecting them into animals in cruel and risky tests.

I joined my colleagues in demanding answers from the NIH about their relationship with the Wuhan Institute of Virology & use of U.S. taxpayer dollars to fund research at this lab. The American people deserve answers & China must be held accountable. https://t.co/tttx5ehJ1L

.@ScottGottliebMD tells @margbrennan that fmr deputy NSA Matt Pottinger’s revelation that the Chinese military was doing secret classified animal experiments in the Wuhan Virology Lab “does create increased risk that this could have jumped from animals to people inside that lab”

Among many others, the Biden White House said just last week that it’s possible that the pandemic sprung from WIV, and that efforts to uncover the truth are thwarted by the Chinese government’s lack of transparency and withholding of vital information. Yet, the NIH has dismissed the notion that these experiments caused the pandemic before an investigation has even taken place.

More than two dozen GOP Reps demanded @HHSgov‘s independent watchdog investigate the NIH’s response to concerns raised about taxpayer-funded research at the Wuhan Institute of Virology, one of the potential origins of the coronavirus pandemic. https://t.co/x2JZ3hORny

The editorial boards of the Wall Street Journal, the Washington Post (twice!), and the New York Post have also condemned the secrecy which hampers investigations into where COVID came from and how it became a pandemic.

From the Editorial Board:

We’re still missing the origin story of this pandemic. China is sitting on the answers. https://t.co/h8aVrQYYS2

As the members of Congress strongly put it: “[W]e are gravely concerned about the NIH’s relationship with both EcoHealth and WIV, and the Agency’s handling of allegations that the COVID-19 pandemic was potentially caused by an NIH-funded laboratory at WIV. We also are alarmed that WIV is eligible to receive additional funding from the NIH through 2024.”

How much money has the Wuhan Institute of Virology received from the NIH?

When was the NIH first aware that WIV was conducting coronavirus experiments with taxpayer funds?

If a U.S. taxpayer-funded laboratory in China is hiding answers about the origins of COVID-19, Americans deserve to know about it. https://t.co/HoioXSrmSj

It is no exaggeration to say that taxpayer-funded animal experiments are now the number one issue at the heart of the COVID-19 origin investigation.

That’s why WCW has been at the forefront of calling for the Wuhan animal lab to be investigated and completely defunded—not to brag, but we were into this issue before it was cool.

There are still many questions that need answering as to the origin of the coronavirus and U.S. financial assistance to the Wuhan Institute of Virology Lab in China. Proud to join my colleagues this week in pressing @NIH for a prompt investigation. Our letter below: pic.twitter.com/FLdplUdZ16

In fact, we’re the ones who first bought it to the world’s attention, that the NIH was handing out your money to the Wuhan animal lab, despite the State Department warning the experiments pose a pandemic risk.

From the start, I’ve sought to hold China/CCP accountable for covering up the start of the virus spread, with help from @WHO . This week, I sent a letter to end taxpayer support for studying viruses at the lab in Wuhan:https://t.co/lhGFrB0SRj

Every day, now, the calls are growing louder from the many people who have joined us since demanding the U.S. to do an independent, transparent, trustworthy investigation into where this virus came from, and stop shipping taxpayer dollars to Wuhan for animal experiments to put us in danger while lining their own pockets.

Must stop this outrage at once. Cheers to investigators